Deity Maruti’s another popular name is Hanuman. Hanuman is omnipotent, most powerful, fearless, a supreme devotee and also well known as a promoter of science of music. Hanuman is an ideal example of conjunction of multiple attributes such as spiritual emotion, devotion, Divine Energy, cleverness and intelligence, which one considers as life-fulfilling. Let us understand special characteristics of Hanuman through this article. 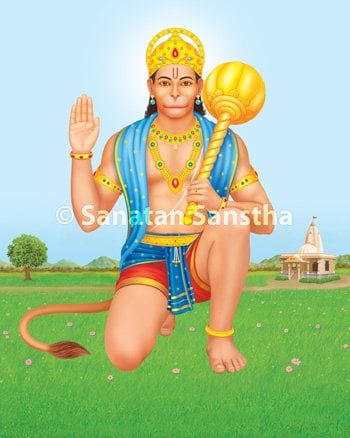 One who travels at the speed of mind, is as fast as wind, has mastery over His senses, is supreme amongst all intellectuals, is a son of Deity Vayu, is chief of community of monkeys and is an emissary of Shriram, I surrender with gratitude unto such Deity Maruti.

When specific things which have maximum ability to attract pavitraks (Subtle most particles containing Chaitanya (Divine consciousness)) of Deities, are offered unto the Idol of Deities, then naturally the Principle of Deities get attracted to the maximum extent to the Idol and the devotee gets further benefited faster because of the Chaitanya of the Deities. Sindur, leaves and flowers of rui and sesame seed oil have maximum ability to attract pavitraks of Hanuman, therefore it is advised to offer them unto Hanuman.

3. Method of offering flowers to Hanuman

4. Incense-sticks to be used in worship of Maruti

While worshipping Hanuman, one should use incense-sticks with Kevada (Screw pine), Chameli (Jasmine) or Amber fragrance as these have maximum ability to attract Principle of Hanuman.

5. Method of offering coconut unto Maruti

It is customary since the earlier times to offer coconut unto Hanuman in the temple. The coconut should be held in front of the Idol of Hanuman. The tuft of hair of coconut should point to the Idol. One should pray to Hanuman for His sattvik frequencies to enter into the coconut. Then the coconut should be broken and one part should be kept with oneself and the remaining part should be offered to the presiding Deity of the place. By doing this, the distressing energies and inferior ghosts in the vicinity of the temple receive the offering through the medium of the presiding Deity and they get satisfied. Thereafter if the holy sacrament from the part of coconut kept with oneself is consumed, one derives maximum benefit from the sattvik frequencies emanating from Hanuman. Some devotees offer the entire coconut unto Hanuman, however with this act only the feeling of sacrifice seldom gets developed. No spiritual benefit can be derived out of it. Therefore it is advised not to offer entire coconut to the Deity. One should break the coconut, place one half in the temple and keep the remaining half with oneself and derive maximum benefit from the Deity’s Principle.

6. Moving coconut around the possessed
individual and breaking it in the temple of Maruti

8. Offering oil unto Hanuman for elimination of spiritual distress

By worshipping Hanuman, one can even alleviate the distress caused by Shani (Saturn). In this ritual, one should take a cup of oil, put 14 grains of black gram in it and view reflection of one’s face in it. This oil should be then offered unto Hanuman. If one is ill and is unable to visit Maruti’s temple, one can worship Maruti as per this. When one’s reflection falls on the oil that of the distressing energy too falls on it. When that oil is offered unto Maruti, the distressing energy in it is destroyed.

9. Oil to be offered unto Maruti should be taken from home

If a person buys oil to offer it unto Maruti to overcome distressing energy, there is a likelihood that that energy may adversely affect the vendor. Therefore, instead of buying oil from vendors sitting outside a Maruti temple, one should offer oil brought from home.

Since Hanuman is omnipotent, He cannot be troubled by demoniacal energies such as ghosts, spirit of deceased persons, daemons etc. Millions of demons in Lanka could cause no harm to him. Worship of Hanuman done to obtain protection from demoniacal energies reaps special benefits. Hence, in order to alleviate distress, a person possessed by ghosts is taken to a Maruti temple, oil viewed by him is offered unto Hanuman by another person, coconut is moved around the possessed individual and broken in a temple of Maruti, or the possessed individual is asked to recite Maruti stotras and chant the Name of Hanuman.

11. Obtain grace of Hanuman by performing worship of might

Hanuman is an important Deity in the battle between righteousness and unrighteousness. Hanuman assisted Shriram in Tretayug in His battle against Ravan and in Dwaparyug He participated in the fierce battle by sitting on the chariot of Shrikrushna and Arjun. When Mughal aggression was at its peak, Samarth Ramdas swami erected temples of Hanuman in 11 places within Maharashtra in order to instigate worship of might and inspired Hindus to establish Hindu nation.