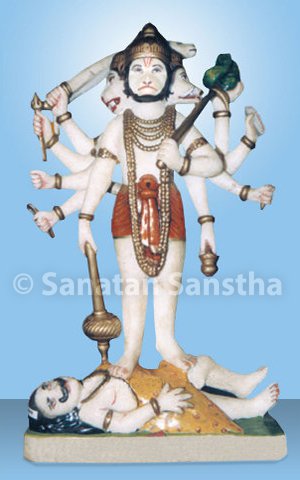 The form of Panchamukhi Hanuman is described in Panchahanumatkavach stotra (Verses) as follows :

Meaning : The gigantic form of Hanuman is adorned with five faces, fifteen eyes, ten hands and is capable of bestowing all sorts of desired supernatural powers.

Tatpurush, Sadyojat, Vamdev, Aghor, Eshan are the famous Names of five faces of Deity Shiva. These faces are positioned in East, West, North, South and Upwards direction respectively. The incarnation of five faced Deity Shiva in the form of Deity Hanuman is also five faced.

3A. Five faces of Deity Hanuman

Meaning : I worship Deity Hanuman who bears Khadag (A weapon which is thorny and broad at one end and narrow at the other), trident, Khatvang (A weapon of the shape of the leg of a cot), noose-goad-mountain (all the three weapons in one hand), mushthi (Weapon in the form of a fist), mace, tree, kamandalu (Water pot generally used by Ascetics) and bhindipal (A weapon which can be thrown to hit and made from iron) in nine hands and performs dnyan mudra with His tenth hand.

In one of the shlokas, Shri Hanuman is described as ‘वामहस्तगदायुक्तम् ‘, which means One who constantly bears mace in His left hand.

Just as Garud is engrossed in service unto Shrivishnu in Vaikunth, similarly, Deity Hanuman is constantly engaged in service unto Shriram. Garud had brought nectar from heaven to free its mother from slavery. Hanuman had brought Sanjivani medicinal herbs from the mountain to awaken Lakshman from subconsciousness. In the same way as Shrivishnu rides on the back of Garud, Shriram and Lakshman had sat on Hanuman’s shoulders. When Ahiravan had captured Shriram and Lakshman, Hanuman had brought Them back by carrying Them on His shoulders. Garud is also immortal as is Hanuman.

3D. Panchamukhi Hanuman – A deity with
enormous power obtained through five incarnations
and capable of undertaking most complex tasks to completion

Hanuman is an incarnation of Deity Shiva. Garud is also an incarnation. Similarly, Varah, Narsimha and Hayagriv are also incarnations. By virtue of this, in Panchamukhi Shri Hanuman, the Shakti (Divine Energy) from all the five incarnations have combined in uniform manner. Due to this enormous Shakti, Hanuman is capable of undertaking any complex mission to completion.

Once a five faced ferocious demon had emerged. He undertook severe austerities and obtained a boon from Deity Brahma that only that being which has same form as his would be able to annihilate him. As soon as he was awarded the boon, the demon started harassing everyone. All the deities pleaded to the God to free them from this suffering. As per God’s directive, Panchamukhi Hanuman assumed the incarnation on eight day of the dark fortnight of the lunar month of Margashirsha, which was a Tuesday with Pushya asterism and Simha lagna. He had five beautiful faces – Monkey, Narsimha, Garud, Horse and Varaha. Panchamukhi Hanuman then annihilated the demon.

The five faces of Hanuman defeat the five disorders of Avidya (Ignorance) and frees one from the three foes namely desire, anger and greed. The three beautiful eyes on each face provide freedom from spiritual, Divine and physical sufferings.

Vedas
The most sacred Hindu scriptures, revealed directly by God
Stotra
Holy hymn; These hymns praise aspects of the divine, such as Devi, Shiva, or Srivishnu
Shlokas
Specifically denotes a metered and often rhymed poetic verse or phrase. Shlokas are usually part of stotras which are prayers to the Deities.