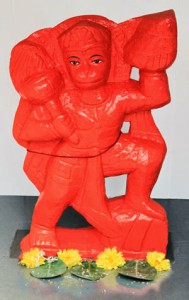 1. Colour of the Idol of Deity Hanuman

Idol of Deity Hanuman is mostly red in colour and rarely black. Shani’s (Saturn’s) influence may have resulted in His black complexion. Hanuman is one who is smeared with sindur (Vermilion). Stories of His love for sindur have gained popularity.

A. Once after bathing, Sita applied a red circular mark in the centre of Her forehead with sindur. When Hanuman asked Her the reason for it, She replied, “It prolongs the life of your Master.” This influenced Hanuman so greatly that He smeared sindur over His entire body ! Shriram was extremely pleased seeing this and remarked, “There is no other devotee as superior like you” and bestowed immortality to Hanuman. This is how Hanuman became one of the 7 immortals.

B. Once when Hanuman was proceeding to Lanka carrying the Dronagiri mountain, Bharat struck Him with an arrow and wounded His leg. This wound healed with the application of oil and sindur, hence Hanuman is fond of them.

Following types of Idols of Hanuman are seen depending upon its size and face types.

Pratap Maruti has a huge form. In this form He adorns mace in one hand and Dronagiri in the other hand.

B. Dasmaruti (Maruti as a humble servant)

Dasmaruti stands in front of Shriram with His folded hands paying obeisance. His head is slightly bent forward and the legs are joined together. In this form, His tail rests on the floor.

Virmaruti has the stance of a warrior. This Idol adorns mace in its left hand. The left hand is supported by the left leg which is folded and brought forward. The mace held in the left hand rests on the shoulder. Right leg is bent in the knee and the right hand is in the posture granting fearlessness. Virmaruti’s tail is raised and sometimes a demon is shown under His feet. Virmaruti is worshipped to eliminate distress caused by negative energies. Divine Energy emanates from Virmaruti, whereas spiritual emotion and divine consciousness emanates from Dasmaruti as He has merged with Shriram. 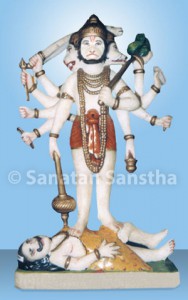 One comes across a number of five faced idols of Maruti. These five faces are those of the eagle (Garud), boar (Varah), horse (Hayagriva), the lion (Sinha) and the monkey (Kapi). This idol has ten arms, wields a flag, khadag (A thorny and broad weapon), a noose and other weapons. A five faced deity implies that it maintains vigilance and controls the five directions – North, South, East, West and the upward direction.

The word ‘south’ is used in two contexts, south direction and the right side.

The face of this Idol is towards the South hence it is known as ‘Dakshinmukhi Maruti’.

Implied meaning of the right side

The face of Maruti is towards His right. His Suryanadi is active. Suryanadi is radiant and emits energy. (The sushumna nadi is always active in Deities Ganapati and Maruti; but once Their form is changed, there are slight variations and accordingly either the surya or chandra nadi gets activated to some extent.) Maruti facing the right side is aggressive (emits energy), akin to Ganapati with His trunk pointing towards the right.  It is worshipped in order to overcome the adverse effects of distressing energies.

The face of this Idol is towards the North.

Implied meaning of the left side

The face of Maruti is towards His left side. His Chandranadi is active. Chandranadi is cool and soothing. Also the North direction is complementary to spiritual practice.

This Idol of Maruti has twenty-two hands and two legs. There is one such Idol in Sourashtra.