An important place of pilgrimage on the south-east coast of Bharat is Rameshwaram ! A pilgrimage to  Rameshwar has special significance in the tradition of Hindu Dharma. 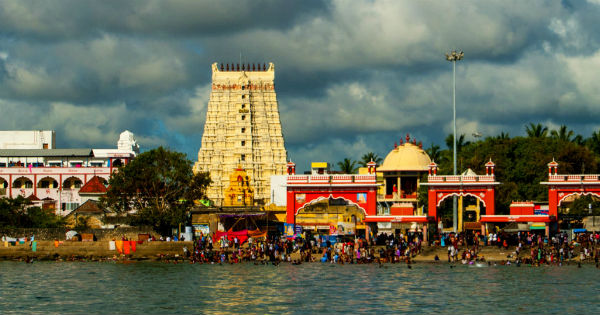 After the annihilation of the ten-headed Brahman Ravan, to absolve Himself of the sin Sage Agastya advised Prabhu Shriram to construct a Shivalinga at an auspicious moment on the tenth day (dashami) of the bright fortnight of the Hindu lunar month of Jyeshtha. Deity Maruti proceeded to Kailash mountain to procure Shiva’s Divine linga for this function but as He was unable to meet Deity Shiva He commenced austerities. Deity Shiva manifested after some time and handed over His Divine linga to Maruti. As all this was time-consuming Maruti was unable to reach Rameshwaram at the decided auspicious moment. So Sita sculpted a linga from sand and as advised by the Sage, Ram installed that linga itself. This is the linga from Rameshwaram which locals refer to as Ramnathswami.

On His arrival when Maruti saw that Shriram had already installed a linga He was dejected. It was Then that Shriram made Him install Shiva’s Divine linga besides the already installed one and made a resolve that those who came to pay respects to Rameshwaram would not get that benefit without worship of this linga. This linga is named Kashivishwanath or Hanumadishwar.

2. Greatness of this sacred place

2A. A place completing a pilgrimage to Kashi

The religious importance that is accorded to Kashi in North Bharat is accorded to Rameshwaram in South Bharat. As per Scriptures after bathing at the confluence of the Bay of Bengal and India Ocean at Dhanushkodi and consecrating (abhishek) Rameshwaram with Holy water from the Ganga, a pilgrimage to Kashi is said to be completed.

2B. One of the four seats of pilgrimage from Chardham

Of the four seats of pilgrimage of the Hindus (Chardham) Rameshwaram is the one in the south. The life journey of a Hindu is said to be completed only after a pilgrimage to Badrinath, Dwarka, Puri and Rameshwaram.

2C. One of the twelve jyotirlingas

Rameshwaram is one of the 12 main jyotirlingas from Bharat.

3. Important sites within the temple

This Shivalinga sculpted by Sita from sand is the main seat of worship.

This is  atmalinga of Shiva brought by Hanumant.

When asking Deity Shiva for a linga for Prabhu Shriram to worship, Hanumant also asked for one for Himself which is known as Atmalingeshwar.

There is a colossal white idol of Deity Nandi sculpted from mud exactly in front of the Rameshwar linga. It is 22 feet tall and 17 feet wide. It lies within a pandal in the temple. Day-by-day this Nandi is growing in height, length and breadth and now its head is touching the roof of the pandal. In 1974 this Nandi was 13 feet tall and 8 feet long.

Close to Deity Nandi is a Garud pillar sculpted from sheets of gold.

A self-manifested 16 foot idol of Deity Hanumant is present here. Its lower 8 feet are submerged in the Indian Ocean  and the upper 8 feet  are visible for worship. (As the temple is situated on a coastal belt there is sea water in the low lying areas of the temple.)

These lakes are outside the temple premises and it is here that pilgrims bathe and perform rituals suchas shraddha (rites for the deceased) etc.

4. Rituals of the pilgrimage

5. The blessed place where Hindu unity is achieved

5A. A depiction of sectarian unity

All religious places in Bharat are divided between Shaiva and Vaishnav sects. Rameshwaram is an exception to this because it is a seat of worship for both sects – Shaiva and Vaishnav. As Prabhu Shriram the seventh Incarnation of Vishnu has actually established Rameshwar, despite it being a seat of worship of Shiva it is sacred to Vaishnavs as well. The Shivalinga here gets its name Rameshwar from Prabhu Shriram who installed it.

5B. A symbol of national unity

From the Ramayan era till date Rameshwaram is a blessed place representing the unity of Bharat because the pilgrimage of Vishweshwar of Kashi remains incomplete without worship of Rameshwar. This alone proves the unique tradition existing in the Hindu Dharma to unite Bharat. This tradition is the reason for crowds of pilgrims here all year round. Despite being the only unguarded place in Bharat it has survived despite innumerable invasions.

This temple has been erected mainly by the Setupati royal dynasty from Ramnad (now Ramnathpur).The foundation of the existing temple was laid in 1414 by King Setupati with the assistance of King Pararajeshwar of Lanka. In the 350 years that followed kings of the Setupati dynasty itself expanded it. The first ritualistic worship of the Deity was performed by this royal family, their priests being Maharashtrian Brahmans.

6B. Splendour of the temple

This temple is so huge that there is no other temple comparable to it in the whole of Bharat. It has been constructed in Dravidian architectural style. It sprawls over 15 acres and is fenced with high walls. Its extent from east to west is 825 feet and width from south to north is 657 feet. There are gates (gopurs) on all four sides of the temple. The gopura on the east has 10 floors while that on the west has 7 Innumerable idols are sculpted on all 4 gopuras. The inner temple has three extensive halls divided by rows of huge pillars. The ceilings of these halls are so high that if an elephant crosses it with a canopied seat during the temple procession then it does not touch even the chandeliers and lamps on them. Every hall is 400 feet long and 17-18 feet wide. Th stone used in constructing these halls are about 40 feet long.

Shraddha
Ritual performed on the death anniversary according to Hindu Almanac, to appease departed ancestors? subtle bodies
Ganga
A Holy Bharatiya river emerging from the crown of Deity Shiva
Dharma
Righteousness
Ashram
A place where a seeker can remain engrossed in spiritual practice through spiritual discipline
Abhishek
Consecration of Deities by ritualistic bathing with water, milk etc