1. Rama, Lakshman and Sita temple built on the banks of
River Sita in ‘Sita Eliya’ village in mountainous region of Sri Lanka !

Sri Lanka is an island with high mountains in its central region. Sri Lanka has been divided into provinces instead of States. There are 9 provinces in all and central province has beautiful mountains. There is a city named as ‘Nuwara Eliya’ in this region which is at 6200 feet height from sea-level. ‘Sita Eliya’ village is 5 kms from this place. There is river called Sita at the banks of which there are 3000 year old idols of Rama, Lakshman and Sita. The temple was built later.

There is a thick forest behind Rama, Lakshman, Sita temple on the banks but nobody goes there. Local residents are also not allowed to go to that forest. The road to the forest is quite difficult. There are several trees but most special is the tree of ‘Ashok’. One look at the forest invoked ‘bhav’ in us which is actually ‘Ashok Vatika’ sanctified by the presence of Sitamata. Local Tamil Hindus refer to Ashok Vatika as ‘Ashok Vanam’.

3. Soil at Ashok Vatika is black and
like ash since it was burnt by Hanumant

There is a reference of Hanumant setting Ashok Vatika on fire after Ramayana war, in ‘Valmiki Ramayana’. The speciality of Ashok Vatika is its black soil which looks like ash. The land on the other side of River Sita i.e. on opposite side of Ashok Vatika is red and the soil is red in all other parts of Sri Lanka.

4. Ashok Vruksh (tree) consoles grieving Sita by
showering love on her like a mother, dispelling her grief

After going to this Vatika, Ashok trees draw one’s attention. Veins in its leaves can be seen quite clearly. One feels flow of ‘chaitanya’ entering whole body when its leaf is held in hand. Tree blossoms twice in a year with red flowers. It is called ‘Sita phool (flower)’. The tree dispelled Sita’s grief (shok) by giving her love like a mother; therefore, it is called ‘Ashok’ tree.

Meaning : ‘Rama going to ‘Tapovan (forest for taking penance)’; then slaying gold deer; sacrifice of Jatayu; meeting of Rama-Sugriva; slaying of Vaali; building of ‘setu (bridge)’; setting of Lanka on fire; followed with slaying of Ravana and Kumbhakarna, is the sequence of events in Ramayana’

5. Stone on which Hanumant kept his foot to jump on Ashok
Tree, under which Sitamata was sitting, bears imprint of his foot 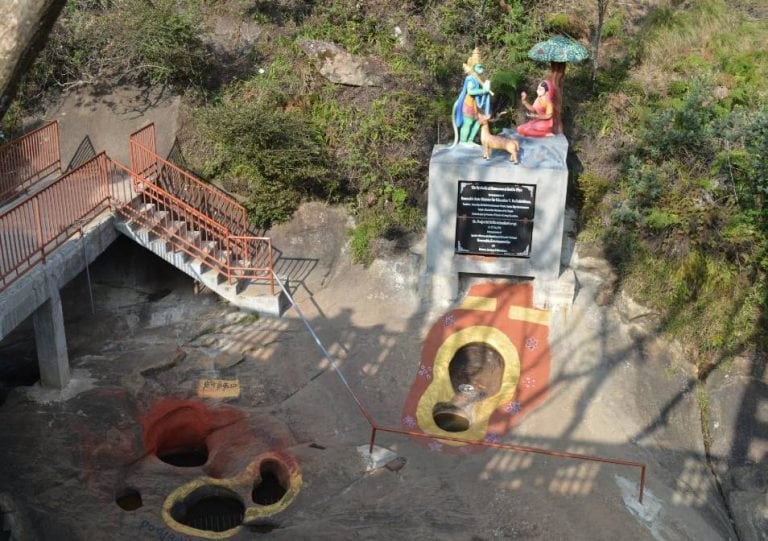 There is an imprint of Hanumant’s foot on the stone behind Rama, Lakshman, Sita temple on the banks of River Sita. It is said that in his search for Sitamata, Hanumant jumped on Ashok tree under which Sitamata was sitting. Devotees get to see marks of his foot even today. Ashok trees are found only in this part of Sri Lanka and nowhere else.

Way to Ashok Vatika is very difficult; local people also do not dare to go to that forest; but owing to help extended by Shri. Jeevaraj, manager of the temple and with the yearning of Sadguru (Sou.) Anjali Gadgil, we could walk through that road and had ‘darshan’ of Ashok Vatika.

The road to Ashok Vatika situated on mountain on banks of River Sita in Sita Eliya village is quite difficult. The mountain is covered with thick forest. One has to go down in the river basin of Sita-River and then climb to the forest on its light and dry soil. It is a very hard task. All of us could, however, go to Ashok Vatika with the help of temple’s manager Shri. Jeevaraj. Shri. Jeevaraj said, “Even local residents don’t dare to go to the forest. Indian dignitaries such as Sou. Pratibha Patil, former President of India, Sri Sri Ravishankar Guruji of ‘Art of Living’ and Shri. Shivaraj Singh Chauhan, the Chief Minister of Madhya Pradesh had earlier visited this place but despite large number of people with them and security personnel, they didn’t take the risk of climbing the mountain and going to forest. Today, it is an auspicious day for Hindus. There is festival of Hanumant being celebrated in the temple and you have come on such special day. Mataji, if you want, I will take you there.” Sadguru (Sou.) Gadgil kaku said, “Shriram is with us. He has brought us till here. We must go to Ashok Vatika.” Sadguru kaku then started walking very carefully through the river-basin before climbing the small mountain of Ashok Vatika on the banks of River Sita.

7. Leeches in the jungle

There are lots of leeches in the jungle at Ashok Vatika and every one of us was bitten by leeches except Sadguru Kaku.

8. Gratitude paid at Gurumauli’s
feet for getting ‘darshan’ of Ashok Vatika !

With the grace of our ‘Paratpar Guru’ Dr. Athavale, who is a form of Shriram, we could have ‘darshan’ of Ashok Vatika which is sanctified with the visits of Sitamata and Hanumant. Only with His grace, could we walk on such difficult path towards Ashok Vatika. It was all His grace and we offer immense gratitude to Gurudev.