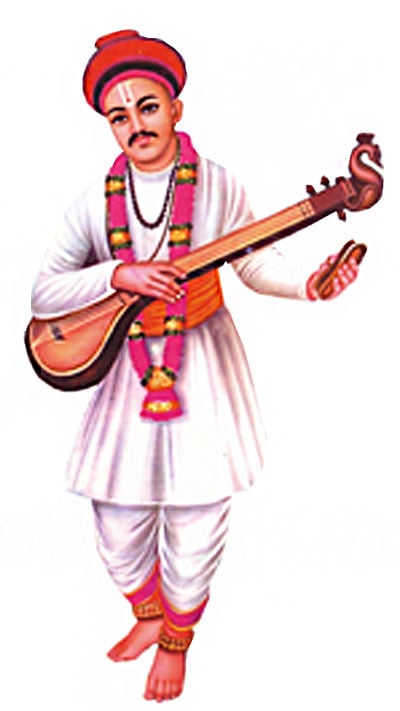 Implied meaning : A jiva (Embodied soul) gets the human birth after going through 84 lacs of other births. He has to repeat this cycle if he commits mistakes in his current life. Therefore try to learn about the Soul (Atmaram). Instead of getting involved in worldly life, keep chanting Deity’s Name continuously. Shri Vitthal is ready at the door of a devotee to emancipate him / her.

Implied meaning : O, mind, although you keep running to all 10 directions to avoid the birth and death cycle, you cannot escape that ever. Have unshakable faith in Shri Vitthal. After the illusion is destroyed by the Name, devotion (Bhakti), Final liberation (Mukti) and Supernatural powers acquired through spiritual practice (siddhi) will be at your service. Have faith, then you will not suffer rebirth (Punarjanma). 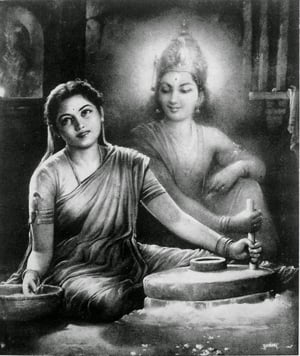 Implied meaning : Devotee Jana sweeps the house and the trash is collected by Shrikrushna. He carries the basket full of the trash and throws it away. Srihari who is ever hungry for devotion started doing such menial chores too. Janabai says to Shri Vitthal, ‘How can I pay off the favours you have done to me !’ (From this hymn we realize that God is hungry for a devotee’s bhav)

Implied meaning : I see Krushna to the left and to the right. I see God everywhere in the whole world. Therefore there is no ignorance; in spiritual language it means ignorance about the Absolute Truth that ‘I am Brahman or the God Principle’. I do not remember about ‘I’ myself. Then how can duality exist there ! (Saint Namdev’s) maid-servant Jani sees with Her own eyes Shrikrushna, well versed in all arts, in all.

Saint Namdev Maharaj, a devotee of Shri Vitthal of highest order ! Let us see the idols of Shri Vitthal in His wada at Pandharpur with great bhav, on the occasion of Saint Namdev’s death anniversary. When Saint Namdev was a child, His father told Him, ‘Today, you offer Prasad to the Deity. Innocent Namdev sat there after offering the Prasad to Shri Vitthal, waiting for Shri Vitthal to eat it. Being very pleased with the devotion of that innocent child, Shri Vitthal manifested before Namdev and ate the Prasad offered to him by Namdev. From the hymn, ‘नामदेव कीर्तन करी, पुढे देव नाचे पांडुरंग’, which means, Namdev would sing hymns and Pandurang would dance before Him. From this we can realise the level of Namdev’s intense devotion for Shri Vitthal. Once a dog ran away snatching a bhakari from Namdev’s hand and not to make the dog eat that dry bhakari, Saint Namdev ran after the dog with a pot of clarified ghee in His hand (to apply that ghee to the bhakari). Saint Namdev had a vision of Shri vitthal in that dog also as He was in constant communion with Vitthal.

Throughout His life Saint Namdev spread the importance of chanting Deity’s Name. He alone was instrumental in spreading Bhagvat Dharma till Punjab. His book of hymns comprising about 2500 hymns is well-known. He composed around 125 hymns in Hindi. 62 hymns from these are found in ‘Gurugranthsaheb’ of Sikhs named ‘Namdev’s Mukhbani’ in Gurumukhi script. Saint Namdev is known as the first auto-biographer and biographer in Marathi language. Saint Namdev has written Saint Dnyaneshwar’s biography in the in three chapters of the gatha (Religious verses) called Aadi, Samadhi and Tirthavali.

A literal example of dasya-bhav (bhav unto God as a servitor) is Saint Janabai !

Once Janabai and Her neighbor had very severe arguments in connection to cow dung cakes which they both had spread for drying in the sun; since these cow dung cakes were very close to one another, the neighbour was upset with Janabai. A panch from that village came to resolve the dispute. He asked both of them, ‘How to recognize your cakes ?’ That time Janabai told him, “The cake through which you will hear the Name of Vitthal, is mine.” Accordingly, when the panch tried to sort out the cakes, he could hear the name of Vitthal coming through them. From this example we can imagine, what must be the quality of her chanting.

About 350 hymns composed by Saint Janabai are printed as ‘Sakal Sant Gatha’. They are based on the birth of Krushna, biography of Prahlad, child play of Krushna etc. She has also written a narrative on King Harishchandra, named, ‘Harishchandrakhyan’.

Let us take the darshan with bhav of these articles testifying Saint Janabai’s matchless devotion on the occasion of her death anniversary and let us pray with surrender to God to enhance our devotion for Him !