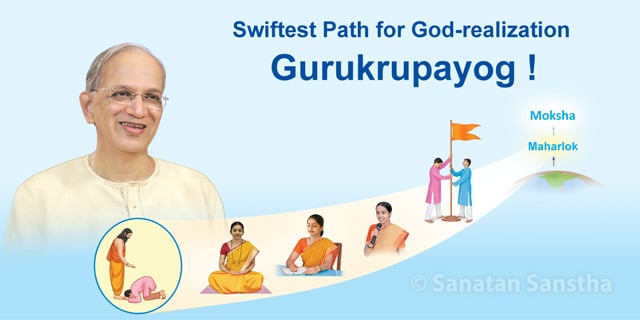 There is no alternative to Gurukrupa (Guru’s grace) for attaining God-realisation irrespective of the Path you select for performing sadhana (such as Karmayoga [Path of Action], Bhaktiyoga [Path of Devotion], Dnyanyoga [Path of Knowledge] etc.) That is why it is said – ‘गुरुकृपा ही केवलम शिष्यस्य परम मंगलम’, meaning, the emancipation of the disciple can take place only by the Guru’s grace. For Guruprapti (Being blessed with a Guru) and to maintain the perpetual flow of Guru’s grace, Paratpar Guru (Dr) Athavale has advised a simple Path of sadhana – ‘Gurukrupayoga’.

1. Principle of Gurukrupayoga – ‘There are as many temperaments
as there are people and corresponding number of Paths of spiritual practice’

Sadhana in various sects and religions is the same for everyone; however, as per Gurukrupayoga, ‘There are as many temperaments as there are people and corresponding number of Paths of spiritual practice’. Since the prakruti (Basic nature) and the ability of everyone is different, the Paths of sadhana for God-realisation are also different. The process of attaining God-realisation becomes faster if sadhana is complementary to one’s prakruti and ability. Thousands of seekers of Sanatan Sanstha are performing different types of sadhana under Gurukrupayoga.

Since most people do not know the Principles of sadhana, they waste their lives in performing incorrect sadhana. To prevent this, Paratpar Guru (Dr) Athavale has narrated the following Principles of Gurukrupayoga –
1. Sadhana according to the interests and ability (according to one’s prakruti),

3. Moving from the gross to the subtle dimension,

4. Sadhana as per the spiritual level,

6. Sadhana as per ashrams (Stages of life),

7 Sadhana as per the times,

9. Sadhana as per certain Principles and

3 A. All-inclusive Path of sadhana

Gurukrupayoga is an easy Path for God-realisation which comprises other Paths of sadhana such as Karmayoga, Bhaktiyoga, Dnyanyoga etc. ‘The proportion of the various Paths of Yoga in Gurukupayoga is given ahead.

3 B. Gurukrupayoga is a Path of sadhana that does not have a system of giving Gurumantra to seekers

I have not given Gurumantra to any seeker who is performing sadhana according to Gurukrupayoga; yet, seekers are progressing spiritually and some have progressed spiritually & reached the level of a Sadguru. The reasons for this are given ahead.

3 B 2. Even though ‘mantra’ is a part of the word ‘Gurumantra’, mostly the Guru advises the disciple which Name of a Deity should he chant. ‘There are as many temperaments as there are people and corresponding number of Paths of spiritual practice’ – this is the Principle of sadhana as per Gurukrupayoga and the focal point of this sadhana is ‘Individual spiritual progress’. Therefore, seekers chant different Names essential for various reasons, such as these being complementary to their sadhana (meaning, their prakruti), distress faced by them due to negative energies, Name necessary to obtain spiritual strength required for samashti sadhana etc. Since all these nourish their spiritual progress, a separate Gurumantra is not necessary.

3 B 3. Gurukrupayoga teaches that it is more appropriate to become a disciple who performs Guruseva by comprehending what is in the Guru’s mind instead of becoming a disciple by simply receiving a Gurumantra’.

3 D. Eliminating personality defects and ego according to Gurukrupayoga is helpful in performing sadhana appropriately as per any Path of Yoga and for rapid spiritual progress.

B. Creating a system to give a review of vyashti and samashti
sadhana so as to pay personal attention to the sadhana of seekers

While performing sadhana, seekers make mistakes due to their personality defects and ego. Due to these mistakes, the output of seekers’ sadhana and seva reduces, and harm may be caused to the Guru’s mission. To prevent this, a system has been put in place by Paratpar Guru (Dr) Athavale so that every seeker gives a review of vyashti sadhana and samashti sadhana every 7 days. During the review, seekers contemplate on their sadhana. They get appropriate perspectives from the responsible seeker (who is taking the review) and get to know of the next step in their sadhana. This helps seekers improve their sadhana. This method of giving regular reviews of sadhana in such a meticulous manner is not found in any other sect or spiritual organisation.

C. Sowing the seed of education on 14 Vidyas (Sciences)
and 64 Kalas (Art-forms) from the perspective of sadhana

According to the Principle that ‘There are as many temperaments as there are people and corresponding number of Paths of spiritual practice’, Paratpar Guru (Dr) Athavale has taught seekers sadhana as per their ability to imbibe knowledge and interest in an art form. For seekers who have the ability to study the Vedas, ‘Sanatan Sadhak-Purohit Pathashala’ has been established. With the objective of ‘Art for God-realisation’, some seekers are performing sadhana through arts such as painting, sculpture, music, dance, dramatics, Vastuvidya (Science of studying a premises) etc.
Through the medium of ‘Maharshi Adhyatma Vishwavidyalay’, which has been established under the guidance of Paratpar Guru (Dr) Athavale, education will be imparted on 14 Vidyas and 64 Kalas.

D. Due to the guidance and grace of Paratpar Guru
(Dr) Athavale, seekers are making rapid spiritual progress

Many Saints and Guru do not find disciples who are capable enough to carry forward their tradition. As against this fact, 71 seekers of Sanatan Sanstha have attained Sainthood and 1,028 seekers have crossed the spiritual level of 60% till April 2017, and they are also on the way to Sainthood.

Vedas
The most sacred Hindu scriptures, revealed directly by God
seva
Service unto the Absolute Truth, that is, God Principle
Satsang
Company of the God Principle
Samashti sadhana
Spiritual practice for the spread of Spirituality
Gurukrupayoga
Path of Guru's grace, which incorporates eight steps
mantra
A syllable or words representing spiritual reality or an aspect of God uttered to protect oneself or to achieve a specific goal