Paratpar Guru (Dr) Athavale experienced that psychiatric patients who do not get cured with Hypnotherapy recovered after performing spiritual practice advised by Saints. He realised that only personality defects and ego are not the basic cause for all psychiatric problems, but spiritual reasons such as destiny and distress due to negative energies are also important. Therefore, He met nearly 25 Saints between 1983-1987 and studied Spirituality. After realising the importance of Spirituality, Paratpar Guru (Dr) Athavale Himself commenced spiritual practice and in 1987, He was blessed with the grace of the great Saint of Indore, Saint Bhaktaraj Maharaj. 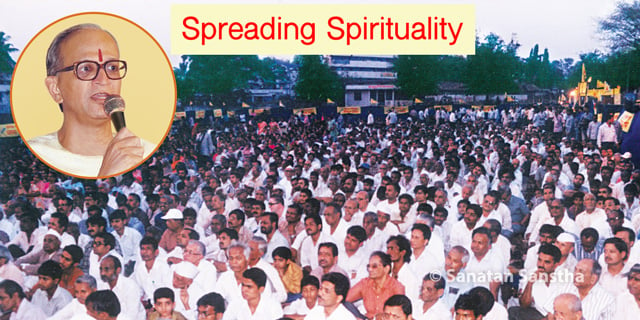 A. The mission accomplished by
Paratpar Guru (Dr) Athavale through
the medium of ‘Sanatan Bharatiya Sanskruti Sanstha’

The clinic (therapeutic centre) of Paratpar Guru (Dr) Athavale in Mumbai became the first Ashram (Hermitage) & office of SBSS to spread Spirituality : ‘After realising the Principle that sacrifice of the body, mind and wealth is essential for spiritual progress, I donated my clinic space (that had 3 rooms) in Sion (Mumbai) to Saint Bhaktaraj Maharaj. From then on, seekers who offered to devote full-time to seva for Sanatan’s mission started living there.’ – Paratpar Guru (Dr) Athavale (13.3.2017)

A 2. Mission accomplished through the medium of Sanatan Bharatiya Sanskruti Sanstha

Through the medium of Sanatan Bharatiya Sanskruti Sanstha, Paratpar Guru (Dr) Athavale accomplished various aspects of the mission such as organising study sessions on Spirituality in Maharashtra, Goa and Karnataka, organising Gurupournima celebrations of Saint Bhaktaraj Maharaj, compiling Holy texts on Spirituality, clearing doubts of the spiritually curious and seekers, and thus helping them progress spiritually.

From 1996 to 1998, He held hundreds of public meetings on ‘Sadhana and Kshatradharma’ in Maharashtra, Goa & Karnataka. It is because of these meetings that thousands of spiritually curious and hundreds of seekers got attached to Sanatan.

B. The mission being carried out through the medium of Sanatan Sanstha

B 2. Goal of Sanatan Sanstha

B 3. Mission of Sanatan Sanstha

B 3C. Gurupournima : To convey the importance of the Guru-disciple tradition, Sanatan Sanstha organises over 200 Gurupournima (See Glossary) celebrations all over the country.

B 3D. Spread of Spirituality during the Kumbha melas : During the Kumbha melas at Prayag (Years 2001 and 2013), Nashik (Years 2003 and 2015), Ujjain (Years 2004 and 2016) and Haridwar (Year 2010), Sanatan Sanstha was able to spread Spirituality extensively. Efforts were also made to create awareness on Dharma-related issues such as maintaining the sanctity of the Kumbha area, temples and pilgrimage centres, taking legal action against fake Sadhus, preventing harm to Dharma etc.

B 3E. Representing Hindu Dharma on the TV channels : Due to its ever-expanding task of spreading Spirituality, Spokespersons of Sanatan Sanstha are being invited by TV channels as representatives of Hindu Dharma during panel discussions on social, national and religious issues.

This website is dedicated to spreading Spirituality in scientific terminology, explaining the science underlying religious acts and clarifying doubts on spiritual practice. Matter on this website is presently available in Marathi, Hindi, Kannada and English and is being read by people in 180 countries.

Balsanskarvargs
Moral education classes for children
seva
Service unto the Absolute Truth, that is, God Principle
Dharma
Righteousness
Ashram
A place where a seeker can remain engrossed in spiritual practice through spiritual discipline