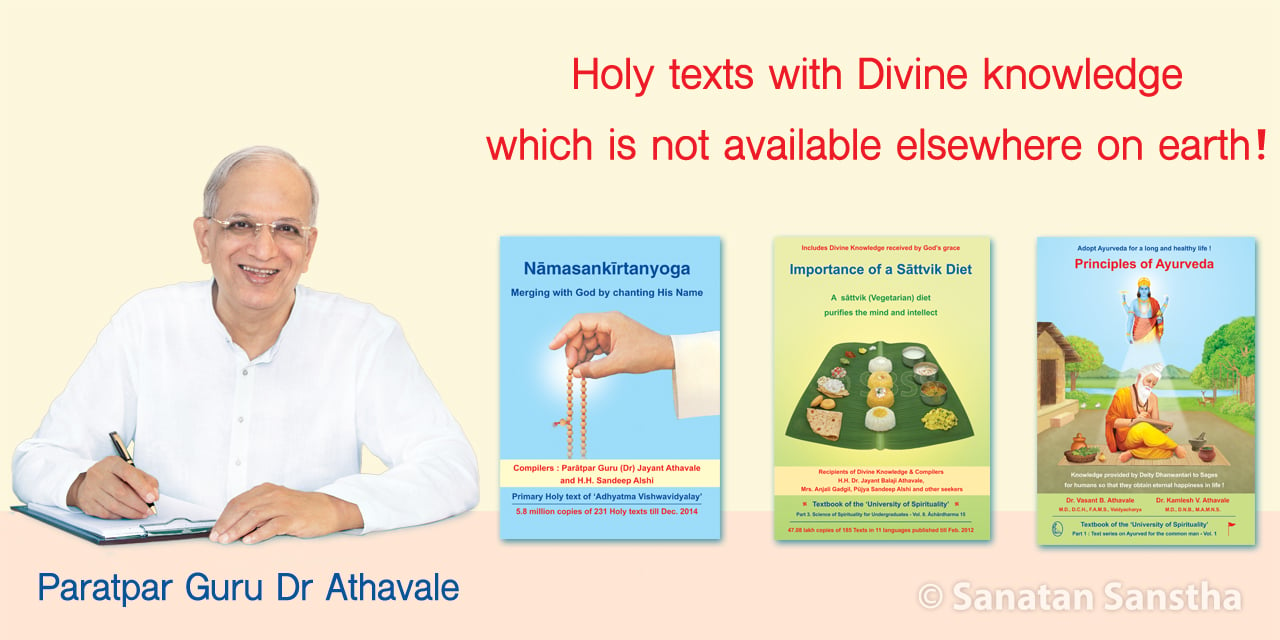 1 A. Knowledge made available for the first time on earth

Many Holy texts of Sanatan contain knowledge, 30-70% of which is made available for the first time on earth

1 A 2. Divine knowledge obtained by some seekers from the subtle on in-depth aspects of Spirituality by Paratpar Guru (Dr) Athavale’s grace : By Paratpar Guru (Dr) Athavale’s grace, in-depth subtle-knowledge of Spirituality on various subjects, which is without beginning and end, is being obtained daily in abundance through the medium of some seekers.

1 B. Providing scientific answers to the why’s and how’s of every aspect in Spirituality

If present day scientific generation is explained the why’s and how’s of every aspect of Spirituality, their trust in Spirituality develops quickly and they begin on their spiritual practice. Therefore, in every Holy text of Sanatan, emphasis is laid on explaining the science of Spirituality

1 C. Writing in a scientific language that can be easily understood by the readers in this scientific age

The research conducted using scientific instruments on positive effects on individuals after they start performing spiritual practice, how Devanagari letters are more sattvik than English letters, significance of pilgrimage places etc. has been included in Sanatan’s Holy texts.

1 E. Analysis and pictures based on subtle-knowledge

Analysis and pictures that depict the process at the subtle-level of the positive effect on individuals who have a sattvik attire, diet, ornaments, religious rituals etc., have been included in Sanatan’s Holy texts

1 F. Some other special features of the Holy texts

1 F 1. Teach appropriate spiritual practice as per the times for obtaining Anand (Bliss) and faster God-realisation

1 F 2. Guidance not merely on the theoretical aspects, but also on how to actually perform spiritual practice

2. Some subjects of Sanatan’s Holy texts

Paratpar Guru (Dr) Athavale has compiled matter for over 8000 Holy texts that are ready to be published. Some subjects of these Holy texts are given ahead.

2 I. Hindu Nation : Creating an ideal Nation, what is the need for a ‘Hindu Nation’ ? etc.

2 K. Spiritual remedies on distress due to negative energies : Drushta and Utara

B. Number of published Holy texts

Over 79 lakh copies of 323 Sanatan’s Holy texts have been published till May 2020 in 17 languages ( Marathi, Hindi, English, Gujarati, Kannada, Malayalam, Tamil, Telugu, Odia, Bengali, Assamese, Punjabi and 5 foreign languages -Spanish, French, Nepali, Serbian & German). The Holy texts and booklets compiled by Paratpar Guru (Dr) Athavale have been published by the organisations established by Him and by organisations inspired by Him.

C. Holy texts that are the foundation of the curriculum
of upcoming ‘Maharshi Adhyatma Vishwavidyalay’