He was born to Sage Kashyap and Aditi in the Krut era (yug). In this incarnation, He reinstated Righteousness (Dharma) by slaying the two demons, Devantak and Narantak and then ended this incarnation.

In the Tretayug, Ganapati was born to Uma on the fourth day (chaturthi) of the bright fortnight of the Hindu lunar month of Bhadrapad as Gunesh. In this incarnation, He slew the demon Sindhu and married Siddhi and Buddhi, the daughters of Deity Brahma.

In the Dvaparyug, once again He was born to Parvati as Ganesh. Ganesh then slew the demon Sindurasur and set free several kings and valorous men whom he had imprisoned. It is in this incarnation that Ganesh preached the eternal philosophy in the form of Ganeshgita to His devotee named Varenya. According to the Bhavishya Puran, the fourth incarnation of Ganesh by name Dhumraketu or Dhumravarna will take birth in the Kaliyug and de­stroy the evildoers.

Though currently it is believed that Ganapati belongs to the family of Deity Shiva and is His son, yet ac­cording to one school of thought, Shiva and Ganesh were formerly one and the same, that is Shiva was Ganesh and Ganesh was Shiva. In Shriganapati Atharvashirsha, Ganesh is referred to as, “त्वं ब्रह्मा त्वं विष्णु: त्वं रुद्र:।” meaning “You are Brahma, Vishnu and Rudra as well”.

The similarities and prowess of Ganesh and Shiva are so outstanding that they can be easily perceived. The three special characteristics of Shiva, that is adorning the moon on the head, the third eye and embellishment with serpents are also seen in the idol of Ganesh. Ganesh is also named Bhalachandra, the one who adorns the moon on the head. He is also referred to as ‘Trinetra (one with three eyes)’ in the ‘ Gajavadanamchintyam’, the holy verse of meditation on Ganesh. Ganesh too has a girdle of a serpent around His waist. A legend says that Deity Shankar wore ornaments of the Sun and adorned the moon on His head in order to cool down the intolerable heat gener­ated after consuming poison. One comes across a similar story about Ganesh, in the Ganesh Puran. When the demon Analasur was destroying the world assuming the form of fire, Ganesh swallowed him. The deities then used cooling measures such as serpents, the moon, etc. to cool down the heat generated in Him.

Both of them have a red complexion and the eight great powers (ashtamahasiddhi). In the worship of Hanuman, flowers of the milkweed (rui) are offered while in that of Ganapati, leaves of the coral (mandar) tree are offered. 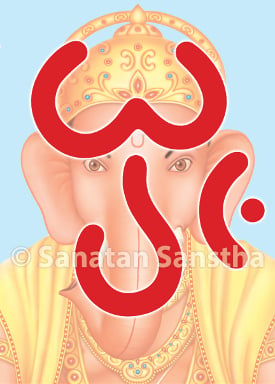 When ‘Om’ is placed vertically, we experience Ganapati

‘When speaking about the philosophy of creation of the uni­verse it is said, “Creation began with the sound Om (ॐ इतिध्वनिरभूत्)”. The manifest form of this sound is described as ” savai Gajakaraha (सवै गजाकरः । )”, that is the sound Omkar is like the face of an elephant. Thus initially a sound was generated and that was Om. If viewed vertically, one will realise that the Omkar appears like the countenance of Ganapati. In short, Om and Ganapati are one and the same. Hence worship of Omkar is equivalent to that of Ganapati. At the time of creation of the universe, the two words Om and atha were emitted from the throat of Deity Brahma.

Hence these two words are said to be auspicious. Omkar is the very nature of Ganapati.’

A. The moon symbolises the head.

B. The earth symbolises the abdomen.

Tretayug
The second in the cycle of four eras since the origin of the Universe
Kaliyug
Era of strife (The present era, amongst the four eras)
Dharma
Righteousness