The modern day hectic lifestyle, domestic tensions, office tensions etc. have made peaceful sleep a rarity for most people. Disregard to nature’s laws pertaining to sleep and not following related achars mentioned in Dharmacollectively form the root cause of the problem of not getting a peaceful sleep. In this article you will get to know about preparations to be made before going to bed in order to get peaceful sleep. It also details the mantras to be recited, prayers to be offered and chanting to be done before retiring to sleep.

1. Preparations to be made before going to bed

A. Perform Achaman(Sipping water from the palm) 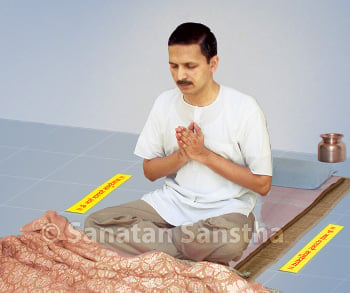 B. If the feet are wet, wipe them dry

Compiler : While going to sleep, it is advised to wipe the feet dry if wet; what is the underlying science? 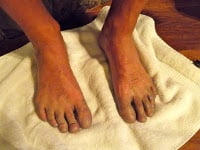 body as well as in all its sheaths. Water makes the body more sensitive and the inner sheaths in the body become active. Water being all-encompassing, it responds to positive as well as negative vibrations equally. It is because an individual is connected to the floor while sleeping, that distressing waves emitting from the earth get attracted towards the wet body of an individual instantly and dissipate to the inner sheaths of the body, thereby increasing the proportion of Raja-Tama(See glossary) components in its mental sheath. This makes an individual irritable and it experiences nightmares, screaming in sleep, restlessness throughout the night etc. Hence, the feet should be wiped dry before going to bed. A dry body can store the Tejtattva (Absolute Fire Principle)–predominant waves. Therefore, the possibility of being attacked by negative energies is relatively less.

C. Why should a metal pot filled with water
be kept near the head side while sleeping ? 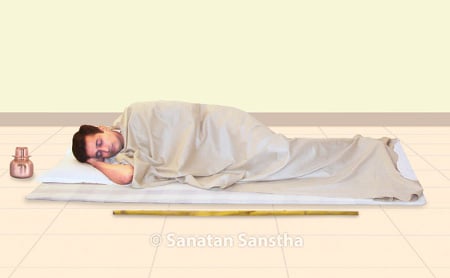 1. Placing a metal pot filled with water next to the head side protects the body from the attacks of negative energies, and its underlying process

A. Water is a highly sensitive medium. It is all-encompassing, meaning, it is highly efficient in absorbing and emitting sagun (Materialised) and nirgun (Non-materialised) waves in equal proportion. Hence, placing a metal pot filled with water next to the head makes protection of the body from negative energies easy.

B. Divinity in the sattvik waves, which congregates as a result of daylong sadhana (Spiritual practice), also remains in an awakened state due to proximity of the pot filled with water to the brim.

C. Due to the pot filled to the brim with water and kept near the head side, the Brahmarandhra (Opening in the spiritual energy system, located on the crown, in the subtle-body) also remains awakened.

D. This keeps the protective sheath created due to sadhana around the body impregnable; else, during the tamasik period of the night, sattvik energy in the body may get expended in combating attacks of negative energies.

D. Science underlying the act of keeping a stick besides the bed while sleeping

1. Characteristic of the dormant fire in the wood and its function:

Wood has dormant fire because of which, wooden sticks emit marak (Destroyer) vibrations of Tejtattva. Due to these vibrations, an individual can get protection from the distressing vibrations in the outer atmosphere during the tamasik period of the night.

2. Method of placing the stick and its underlying science

B. Due to the Kshatratej, the gross body of an individual remains alert and sensitive to repulsing the attacks of negative energies even during the night. – A Scholar (Through the medium of Mrs. Anjali Gadgil)

2. Mantras to be recited, prayers to be
offered and chanting to be done before sleeping

Just as there is Sourasukta (A group of mantras in Vedas pertaining to Sun Deity), there is a Ratrisukta too (A group of mantras in Vedaspertaining to the Goddess of night). Nidra is referred to as Nidradevi (Goddess of sleep). Of the various forms of Devi (Goddess), nidra too is one form. As you lie down on the bed, recite the Ratrisukta 2-3 times. Those who can, should recite Ratrisukta in a Vedokta (As mentioned in Vedas) manner.

B. Shlokas / mantras to be recited before sleeping

Meaning : I pay obeisance thrice to the Devi, who is present in all living beings in the form of nidra. Keep reciting this shloka. Gradually, the thought process will stop, a rhythm will set in and we will fall asleep in ten to fifteen minutes.

C. While going to sleep, earnestly sing the following abhang (Hymn in Marathi)

D. Pray unto Nidradevi or the Deity of worship

1. Offer unto Supreme God all the auspicious and inauspicious karmas (Action which gives rise to destiny), as well as karmas that bestow merits-demerits, so also those performed knowingly-unknowingly. Ask for forgiveness from Him for all the sins committed during day. – Gurudev Dr. Kateswamiji

2. Pray unto the Deity of worship – May my chanting continue in the subconscious mind even during sleep, and may I get a peaceful sleep.

3. Spiritual experiences related to going off to sleep after praying

On the night of 25.8.2006, I was unable to sleep. Hence, I prayed thus – O Nidradevi, may I fall asleep without being distressed by negative energies during the night. Thereafter, I soon fell asleep. – Master Kaushal Nitin Kothavale, Miraj, Maharashtra (Age 15 years)

E. Chanting the Name of Deity of worship

Go to sleep while chanting the Name of Deity of worship.

3. Spiritual remedies to be adopted
as protection from negative energies during sleep

1. Light a sattvik incense-stick, wave it around in the room and place the lit incense-stick on the stand meant for the purpose, a little away from the pillow.

2. Light a ghee or an oil lamp (sesame oil / groundnut oil) lamp having a mild flame, near the head.

3. Before going to bed, sprinkle Vibhuti or water mixed with Vibhuti below and over the mattress.

4. Apply Vibhuti to the hands and feet.

Note 1 – H.H. Bhaktaraj Maharaj, the source of inspiration of Sanatan Sanstha, is the writer, composer and singer of these bhajans.
Chaitanya from bhajans helps protect from negative energies.