1. Where should we bathe?

Bathing in a river or a water body is ideal, bathing in a well is fairly good, while bathing in the bathroom at home is inferior.

A. Reasons for water from a river and water reservoirs being ‘ideal’ for a bath 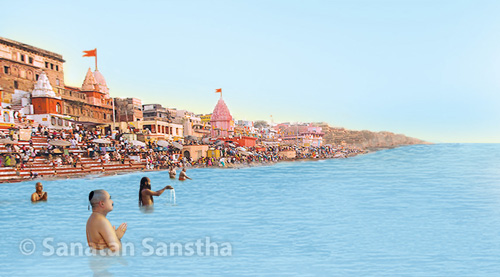 Bathing in the river

Since the water in rivers and water reservoirs is flowing, it can create radiance in a dormant state from the sound (arising out of flowing of the water) and also intensify it. Bathing at such places, with the radiance providing touch of the water, the chetana (That aspect of Divine consciousness that governs the functioning of the mind and body) within the body is awakened, thus activating and then pushing the Raja-Tama predominant waves (which have accumulated and intensified in the voids of the body) outwards. In this way, this Raja-Tama predominant energy is first released and then disintegrated in the radiance of the water. Consequently, the body becomes pure and clean at the subtle level as well. That is why, such a bath is said to be ideal. The more the flow of the water, the more disintegration it brings about of the Raja-Tama predominant particles at the level of the Tej-tattva (Absolute Fire Principle).

B. Reasons for considering bathing in a well as ‘fairly good’

Since water in a well does not flow, the potential of well water to create radiance, to concentrate and transmit it to the bather is also less. The water stagnation creates a kind of grossness in it, which is an invitation to insects, germs and Raja-Tama-predominant negative energies. Since the potential to concentrate the distressing vibrations in it is enhanced in stagnant water, at the level of purity, which is with respect to disintegration of Raja-Tama-predominant waves, it is less beneficial.

C. Reason for considering bathing in the bathroom to be inferior

The home environment is restricted, that is, it displays less association with the pervasiveness of the external atmosphere. Depending on the temperament of the individuals residing in a premise, the momentum of their respective waves in the premises increases proportionately. With passage of time, these waves get concentrated there. Since in the Kaliyug, most individuals are Raja-Tama-predominant, with the help of these waves several dissatisfied souls of ancestors can possess them. A bucket placed in such a closed vastu (Premises) (where distressing vibrations from the atmosphere attack it and cause friction around it) also attracts distressing vibrations from the atmosphere into it. An Apa-tattva (Absolute Water Principle)-predominant sheath having motion is generated around a bucket of water placed in restricted vastu. If the vastu is charged with distressing, impact giving and frictional waves, they begin to move towards the sheath around the bucket. When these waves collect in the bucket, through the bath they can enter the body of the one bathing. That is why; such a bath makes the body impure and is a cause for negative energy attacks, and is considered inferior. To summarize, any process by which we become susceptible to negative energy attacks is considered inferior – A Scholar (Through the medium of Mrs. Anjali Gadgil, 25th December 2007, 8.56 p.m.)

Whenever possible, an individual should bathe in rivers, lakes, wells etc. Bathing in natural surroundings purifies the body with the help of the Pancha-tattva. That is how, Raja-Tama-predominant particles in the body of an individual undergo disintegration to a large extent. The prana-deha (Vital body), mano-deha (Mental body), karan-deha (Causal body) and mahakaran-deha (Supracausal body), all get purified and become capable of absorbing sattvikta. Thus, the individual is able to absorb energy of the nirgun (Non-materialized) state and the vibrations of a superior Deity to some extent. In addition, since the external atmosphere of the individuals comes into contact with the universal atmosphere, the individuals can, to some extent, absorb and emit the Principle from the Universe and emit that as well. – A Knowledgeable One (Through the medium of Mr. Nishad Deshmukh, 16th April 2007, 6.13 p.m.)

(That is why, when we perform a religious ritual at a place of pilgrimage, we are asked to bathe in a sacred river or lake. – Mr. Nishad Deshmukh)

2. Why should we bathe in the morning?

Bathing at the Brahmamuhurt is the ideal time for a bath. However, today, for most people, that time is inconvenient for bathing; so bathe as early as possible after sunrise. Nowadays, since it is a practice to sweep and swab before a bath, in this text too the same order has been maintained.

Underlying science – With the help of waves of the Apa-tattva, the body absorbs sattvik waves from the atmosphere

It is very important to bathe in the morning, because during this period the atmosphere is full of sattvik waves. Waves of the Apa-tattva touching the physical body through the medium of water makes the body very sensitive to absorption of waves from the atmosphere during this period. In the Kaliyug, however, everything has overturned. Women complete their household chores and bathe thereafter, since they sweat during the house chores. Then they comb their hair. Since the momentum of Raja-Tama-predominant waves in the atmosphere is high in the afternoon, and the body is sensitive to absorbing waves from the atmosphere, it absorbs Raja-Tama-predominant waves when bathing. Hence, though the body is cleaned externally, internally it remains unclean. – A Scholar (Through the medium of Mrs. Anjali Gadgil. 29th October 2007, 9.46 a.m.)

B. Bathing in the morning is better than bathing at night

Underlying science – After a morning bath, sattvikta in the physical and subtle bodies grows tremendously and lasts for a longer period, unlike in the night when it lasts for a short while

1 thought on “Why bathing in the morning is more beneficial than bathing at night ?”