1. After cleansing the teeth with a twig, discard it in the south-west direction 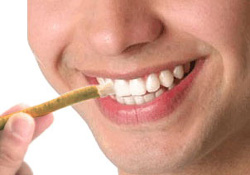 Underlying science : Discarding the used twigs charged with Raja-Tama predominant gases and waves in the south-west direction prevents pollution of the atmosphere

2. Rinse the mouth and then perform achaman

Drinking bed-tea enhances the Tama component;
while having sattvik food or drink after rinsing the mouth
increases sattvikta, thus preventing the entry of black energy

When should teeth not be brushed ? What is the underlying science ? 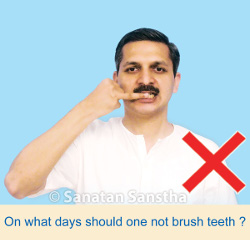 1. Do not brush teeth on the days when a fast is observed

Underlying science : On the day of a fast, the gastric heat is active which purifies the body; hence, to avoid any obstacles in this action, teeth should not be brushed. On rinsing the mouth while brushing teeth, the intensity of heat decreases

On the day of a fast, various waste gases are expelled into the voids of the body. On this day, the secretion ability of the cells increases. Due to the fast, the supply of external energy stops; hence, the internal gastric heat becomes active, and along with the strength of the Tej (Absolute Fire Principle)-predominant waves, disintegrates all the Raja-Tama-predominant gases and particles in the body. Fasting activates the dormant internal heat, which in turn activates the Pancha-prana (Five vital energies) that flows throughout the body and purifies all the sheaths of the subtle body. After brushing the teeth, the mouth has to be rinsed. Thus, the body comes into contact with water which emits Apatattva (Absolute Water Principle) waves. These can reduce the intensity of the heat that has increased in the body, and which helps disintegrate the Raja-Tama-predominant particles. Hence, it is advised that the teeth not be brushed on the days when a fast is observed. – A Scholar (Through the medium of Mrs. Anjali Gadgil, 20th July 2005, 12.21 p.m.)

2. Do not brush teeth on the day of Shraddha
(Special rituals performed for the departed ancestors)

Underlying science : The Tej-tattva which gets activated by the chanting of mantras during shraddha, can get depleted through water used to rinse the mouth while brushing

On the day of shraddha, the linga-dehas (Subtle-bodies) of ancestors descend onto the atmosphere of the earth and move about in their respective premises. This increases the proportion of Raja-Tama-predominant waves in the atmosphere. The sound waves from the mantras directly act on the individual performing shraddha, and activate its Panchaprana. Tej-predominant waves then start flowing into the individual, thus protecting it from the Raja-Tama-predominant atmosphere. To prevent reduction in the intensity of these Tej-predominant waves, the mouth is not rinsed even after meals on the day of shraddha. In this way, an attempt is made to retain the intensity of the internal body heat by minimum contact with water.

Water that is charged with mantras is used for cleansing the teeth, because the Tej-predominant waves are already enhanced in it through mantras. Therefore, in the earlier times, neem leaves, which are known for enhancing the Tej-tattva, would be put in water used for bathing. Similarly, a twig of neem was used for cleansing the teeth, and the juice obtained by chewing it would be swallowed for retaining the Tej-tattva in the body. Only then, one would commence rituals like shraddha or fasting.

On the day of Shraddha, the ancestors’ subtle-bodies come very close to the earth. In the earlier times, the ancestors too performed spiritual practice and were sattvik. Scriptures advised against cleansing of the teeth on the day of shraddha, so that the Tej in the blessings that the ancestors gave would not reduce. The Tejtattva in the blessings of ancestors would concentrate in the void of the mouth and easily enter the voids in the body with the help of either Vayu-tattva or Apa-tattva present in the sputum through this action.

Suggestions pertaining to the sequence of achars