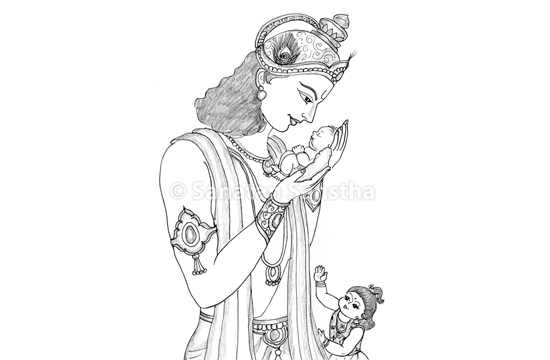 1. When a lady-seeker with intense yearning for sadhana (Spiritual practice) requested Mrs. Uma to draw a picture for her, she replied that if Shriguru wished so, He would get it drawn and when the daughter of the lady-seeker gave birth to a baby girl, Mrs. Uma got the inspiration to draw a picture

Mrs. Jayashree Tangi from Solapur, Maharashtra, had come to USA for post-natal care of her daughter. (Mrs. Uma had also gone to visit her daughter in USA. – Compiler) Mrs Tangi has intense yearning for sadhana. Hence, upon arriving in USA too, she was eager to have satsang (Company of the God Principle). She requested me to draw a picture for her. I replied, “Since I draw pictures by Shriguru’s grace, they all belong to Him. If He wishes, He will get a picture drawn from me”.

2. Picture of Shrikrushna welcoming and blessing a person who has taken birth for establishing the ‘Hindu Nation’

After that, I drew a picture. The scene in the picture was – ‘An individual has taken birth for establishing the ‘Hindu Nation’ and Shrikrushna was welcoming and blessing it. I was very happy and was insisting Him to give me the baby.’

The newborn is an evolved Saint who has attained the highest level in Spirituality called ‘Paramhansa’. This is a state where the mind, intellect, chitta (Subconscious mind) and ego have completely dissolved and the golden moment of beautiful union of individual with Shiv commences. In this state, the sagun (Materialised) has attained the height of purity and absolute state of surrender. In this state, the seeds of trigunas (The three basic components of the human body – Sattva, Raja and Tama) dissolve and the sagun state also immerses. The individual becomes trigunatit (Goes beyond the three components) and starts to merge with the nirgun. No matter what the path of sadhana – Karmayoga (Path of Action), Dhyanyoga (Path of meditation), Dnyanyoga (Path of Knowledge) or Bhaktiyoga (Path of Devotion) – unless the seeker attains the Paramhansa state like that of a newborn, he cannot attain Moksha (Final Liberation).

Due to 100% bhav of a surrender in the newborn, God is holding the infant close to His chest and lovingly welcoming him to the abode of Moksha.

2. Shrikrushna narrating the stories of His leela as a child and feeding curd-rice 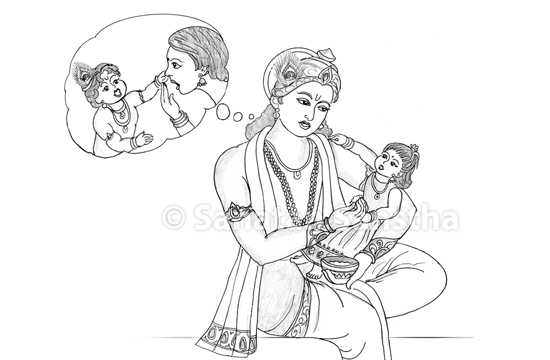 While still a child, Shrikrushna gave mother Yashoda vision of the entire universe in His mouth. Shrikrushna is narrating this leela (divine play) and feeding curd-rice to the lady-seeker.