1. Waking up at the Brahmamuhurt

As agreed by scriptures, wake up at the Brahmamuhurt. A prahar (Unit of time) before sunrise has two muhurts (Auspicious time), the first one called Brahmamuhurt. At this time, the human intellect and the energy for compiling a Holy text is good. Hence, the noun Brahma is prefixed to this muhurt. (Kulluk Bhat’s commentary on Chapter 4, Shloka 92 of Manusmruti)

2. This period is predominant with the Sattva component which enhances knowledge. The intellect during this period is pure and radiant. Brahmamuhurt is the best period for performing tasks related to the acts of Dharma and artha (Material gain), for considering Vedic principles and introspection.

3. During this period, the process of imbibing virtues like purity of the body and mind, ability to remain engrossed in karma (An act), gaining knowledge, donation, control over the senses, performing of austerities, truth, Shanti (Serenity), compassion towards all creatures, absence of greed, being ashamed of performing condemnable deeds, stability, radiance and purity becomes easier.

4. Mosquitoes, bedbugs and fleas become weak during this period.

5. Dominance of negative energies is also weakened during this period.

2. Normally, why do we yawn after waking up?

The gases generated in the body at night are expelled through the mouth in the morning, resulting in yawning.

The mouth is an opening for removing of Vayu (gases). Sattva-uttprerak (Stimulating the functioning of Sattva component) gas functional in a person is released along with words that it utters and imparts momentum to the subtle form of these words. Since the gases generated in the body at night are not expelled through the mouth during sleep, they accumulate in the body and are activated in the morning thus expelled in large proportion through the mouth of a person. That is why we yawn.

3. Activities to be performed upon waking up

Upon waking up, before getting out of bed, perform Shrotrachaman. Even if water is not by your side, perform Shrotrachaman without fail. – Shri Gurucharitra, Chapter 36, Stanza 124. Shrotrachaman means touching the right ear with the right hand and reciting the twenty-four Names of Shrivishnu, starting from ‘Om Shri Keshavaya Namaha’. Since the Deities Aditya, Vasu, Rudra, Agni, Dharma, Ved, Apa, Som, Anil etc. all dwell in the right ear, even the touch of the right hand to the right ear gives the result of an achaman (Sipping water from the cupped palm thrice, while uttering the first three of the twenty-four names of Shrivishnu and releasing the water into a plate from the palm while uttering the fourth name). Achaman leads to internal purification.

Meaning : O Shri Ganesh, the destroyer of evildoers, the powerful one, who has the radiance of a thousand suns. Let all my actions be accomplished without any obstacles.

2. Salutation to the Deity

Meaning : May the trinity of Deities – Brahma the Creator, Shrivishnu the Nurturer and the slayer of the demon Moor, Shiva the Destroyer and slayer of the demon Tripur, and the nine Cosmic bodies Surya (Sun), Chandra (Moon), Mangal (Mars), Buddh (Mercury), Guru (Jupiter), Shukra (Venus), Shani (Saturn), Rahu (Neptune) and Ketu (Pluto) make my morning auspicious.

Meaning : Ashwatthama, the son of Dronacharya, the generous King Bali, Ved Vyas, Hanuman, Bibhishan, Krupacharya, and Parshuram who eliminated Kshatriyas (One who belongs to the second of the four varnas (Classes), namely the warrior class) from the earth twenty-one times, are the seven chiranjivs (immortals). Hence, revere them.

Meaning : The severest of sins of an individual who recounts the greatness of Panchamahasatis (that are, Ahilya [Wife of Sage Gautam], Droupadi [Wife of the Pandavs], Sita [Wife of Shriram], Tara [Wife of King Vali] and Mandodari [Wife of Ravan]) are wiped off.

C. Kardarshan (Looking at the palm) 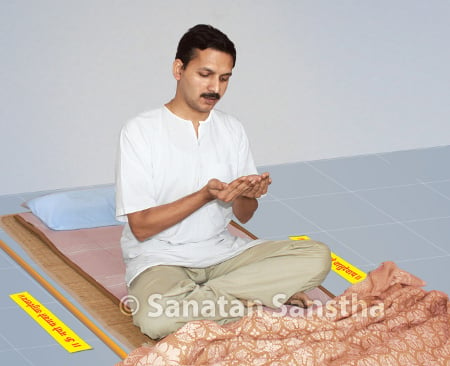 Kardarshan (looking at the palm)

Recite the following shloka (Shlokas ) by cupping the palms and concentrating on them.

(Variation: Deity Brahma resides at the base of the palms.)

1. Implied meaning of the shloka

While acquiring wealth or Lakshmi, if there is absence of knowledge and caution, then Lakshmi proves to be alakshmi (Misfortune) leading to destruction; hence, the need for Saraswati.

Govind is the one who resides in the form of Saraswati in the middle and as Lakshmi at the fingertips of the palms. While praising Deity Shiva and Devi Parvati in His Holy text Amrutanubhav, Saint Dnyaneshwar says, ‘Though the base, middle and fore portions of the palm look different from each other, it is Shri Govind Himself who functions through them. Almost every activity is performed by the fingertips, hence, Shri Lakshmidevi resides there; however, if the flow of knowledge arising out of experience and branched off from the core flow does not reach the palm, then without it, the hand cannot perform any activities’.

1. Maya (Great Illusion) in all its splendour and enticing manifest form, meaning, Shri Lakshmidevi and the basic unmanifest form of Shri Govind are one and the same. The one imparting this knowledge is Shri Saraswatidevi, who is the welfare provider and bestower of knowledge.

2. Lakshmi, Saraswati and Govind denote karma (Action which gives rise to destiny), dnyan (Spiritual knowledge) and bhakti (Devotion) respectively. When these three unite, only then can we unite with God.

3. Only if karma is performed with devotion, supported by knowledge, a balance is struck between pravrutti (Active in worldly life (opposite of nivrutti), inclined towards participation in worldly affairs) and nivrutti (Cessation of participation in worldly affairs), thus helping to lead a perfect and beautiful life justifying the Chaturvarnashram (System of four classes and stages) and ultimately, merging with God.

4. Such a person becomes a nishkam-karmayogi (Selfless seeker practising Karmayoga).

2. Cupping of the palms creates a Brahmamudra that activates the Sushumna-nadi, which helps in removing the Tama component generated in the body during sleep at night

Recitation of the shloka, ‘ कराग्रे वसते लक्ष्मी: करमध्ये…..’ while concentrating on the cupped palms attracts Divine waves from the Universe towards the palms. These, divinity predominant waves, get concentrated on the palms, and by acquiring the expansiveness of the Akash-tattva (Absolute Ether Principle), remain in the hollow created by cupping of the palms. The cupping of palms creates a Brahmamudra which activates the Sushumna-nadi , thus favouring spiritual progress of the person. If sleeping all night has caused accumulation of the Tama component in the body, then its removal is facilitated by activation of the Sushumna-nadi. – A Scholar (Through the medium of H.H. (Mrs.) Anjali Gadgil, 29th October 2007, 9.46 a.m.)

After reciting the shloka,‘कराग्रे वसते लक्ष्मीः …..’, pray to Mother Earth, recite the following shloka and then step onto the ground.

Meaning : O Goddess Earth, You are adorned with the ocean as your attire, and mountains as your breasts; You are the wife of Shrivishnu. I pay obeisance to You. Please forgive me for treading on You with my feet.

A. By stepping on the ground after praying to Mother Earth and recitation of the shloka, ‘समुद्रवसने देवि……’ the distressing vibrations which accumulated in the body as a result of the Tama component generated due to sleep at night, are dissipated into the earth.

Tama
One of the three components in the Universe denoting inertia and ignorance
Sushumna-nadi
Central channel of the spiritual energy system
Shlokas
Specifically denotes a metered and often rhymed poetic verse or phrase. Shlokas are usually part of stotras which are prayers to the Deities.
Prahar
A time of a day (a day is divided into 3 hour segment called prahar)
Muhurt
The auspicious time
Karma
An act that becomes destiny, meaning, leads to a give and take account that has to be settled
Gurukrupayoga
Path of Guru's grace, which incorporates eight steps
Dharma
Righteousness
Brahmamuhurt
An auspicious time at dawn between the fourth ghatika from night and the second ghatika before sunrise, ideal for spiritual practice
Ashram
A place where a seeker can remain engrossed in spiritual practice through spiritual discipline
Achaman
Sipping water from the cupped palm thrice, while uttering the first three of the twenty-four names of Srivishnu and releasing the water into a plate from the palm while uttering the fourth name.
Gurucharitra
Composition on the life of Shripad Shrivallabh and Nrusinh Saraswati, the Incarnations of Datta - the Guru of all Gurus)
Sattva
One of the three components in the universe, signified by purity and knowledge