1. Urinate or defecate when the body and head are draped with a cloth

2. Hang the janeu (Sacred thread) around the right ear before going to the toilet

(The janeu is normally worn over the left shoulder and under the right arm.) 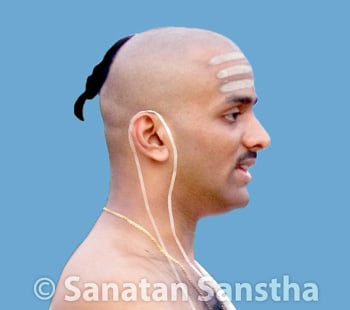 1. This act is useful in making our impure state pure. After washing the hands and feet, and rinsing the mouth with water, take the janeu off the right ear. The spiritually scientific reason for this is that the physical body above the navel is considered pure for performing religious rituals, while the portion below it is considered impure.

2. Since Deities like Aditya, Vasu, Rudra, Agni, Dharma, Apa, Som, Anil etc. reside in the right ear, simply touching the right ear with the right hand bestows the benefit of an achaman (Sipping water from the cupped palm thrice, while uttering the first three of the twenty-four names of Shrivishnu and releasing the water into a plate from the palm while uttering the fourth name) (achaman leads to internal purification). Hanging the janeu on the sacred right ear prevents the induction of impurity.

4. In the normal position, the janeu always remains in contact with the waist region. This region becomes impure due to the transformation oriented changes of the Raja-Tama-predominant waves taking place within the body during the course of urination and defecation. The sanctity of the janeu is reduced due to the contact with this impurity. To prevent this, a custom of hanging it on the right ear before urination and defecation is prevalent.

One school of thought

Face the north in the morning and evening, and the south at night while urinating and defecating.

A. It becomes possible to assimilate the Raja-Tama-predominant waves generated from the acts of urination and defecation into the all-pervasive intense energy from the north

Gurudharaṇa (The retentive power of the Guru) or the Guru Principle resides in the north. This dharaṇa is all-pervasive and therefore, can easily assimilate within itself any act that generates a sin. This dharaṇa is also known as ‘Janak-dharaṇa’ or ‘Pitru-dharana’. The predominance of Raja-Tama gradually rises from dawn to dusk. During this period, the waves in the north, as well as those leading to dissolution of the Raja-Tama-predominant waves from various acts (such as urination and defecation), are in an activated state. Hence in this period, to free the Raja-Tama-predominant karma (of urination and defecation) of its sins, perform these karmas into the Janak-dharaṇa (which is dissolving and flowing in nature) while facing the north direction, keeping the respective objectives in mind. During these periods, amongst all directions, the north direction has the maximum concentrating power of Shakti (Divine Energy); therefore, it is possible to dissolve all the Raja-Tama-predominant waves in this concentrating power.

B. Yama waves predominant in the atmosphere being able to concentrate and assimilate within themselves the Raja-Tama-predominant waves

Yama waves are predominant in the atmosphere at night. At this time, the Yama direction (that is, south) can concentrate and assimilate large quantities of Raja-Tama-predominant waves. Taking advantage of this principle, it is advised that the karma of urination or defecation be performed facing the south at night. At night, some Divine souls protect the east, west and north directions through the medium of Sattva-Raja-predominant waves. That is why, performing acts such as urination or defecation in those directions leads to accumulation of sin.

C. Another school of thought

The southern direction assimilates unholy actions. Faeces are associated with inertia indicating unholy acts; therefore, its excretion in specific atmospheric regions that are charged with Yama waves and associated with acts of inertia does not disturb the equilibrium of energy waves at the respective levels.

The northern direction causes dissolution of sinful actions. Urine is subtler and more sensitive than faecal matter in assimilating Raja-Tama-predominant waves. Hence, it can create a greater impact on the atmosphere in a shorter time. Hence, urinate facing the north that is conducive to Gurudharana, meaning, one that is receptive to all and which dissolves everything into itself. Carrying out the respective excretory processes facing the respective directions as per the waves coming towards that direction, helps wash away the sins and obtain merits.

Tama
One of the three components in the Universe denoting inertia and ignorance
Karma
An act that becomes destiny, meaning, leads to a give and take account that has to be settled
Janeu
Sacred thread
Dharma
Righteousness
Dharana
Sentience
Brahmatej
Radiance of a Brahman
Brahmarandhra
Opening in the spiritual energy system, located in the crown of the head
Achaman
Sipping water from the cupped palm thrice, while uttering the first three of the twenty-four names of Srivishnu and releasing the water into a plate from the palm while uttering the fourth name.
Sattva
One of the three components in the universe, signified by purity and knowledge