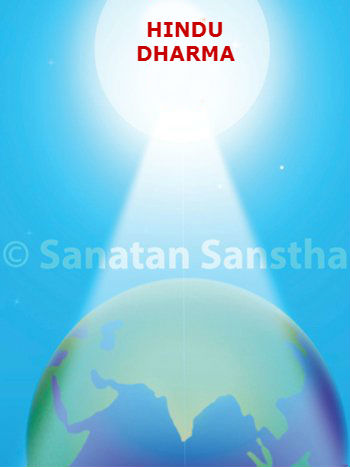 On the night of December 31st and on January 1st many people in Bharat wish each other New year. The number of Hindus indulging in sending New Year greetings was noteworthy. Devout Hindus however try to educate these individuals. On social networking websites such as Twitter, lakhs of devout Hindus educated the community with the quote ‘MyNewYearIsHinduNewYear’. Several secular and so-called modern Hindus however ridiculed such Hindus jeering at them to increase their expansiveness. Here is an excerpt from ‘SpeakingTree.in’ website which was meant to lash out at such Hindus. It is being uploaded here for the benefit of our readers.

Many customs and traditions are prevalent in the Hindu Scriptures. Along with religious and spiritual reasons there are also scientific reasons underlying them. However so-called rationalists have scorned these customs labeling them as blind-faith. The Sanatan Sanstha has published these reasons from the scientific viewpoint both in its Holy texts and in issues of Dainik Sanatan Prabhat but organisations such as the Andha Shraddha Nirmulan Samiti (ANIS) has disregarded them without researching them simply because Sanatan has mentioned them. Scientists and experts associated with a patriotic organisation named the ‘Patriotic Forum’ in Delhi, after researching these have found scientific reasons for customs in the Hindu Dharma, some of which are elucidated further.

1. Throwing coins into a river

Throwing a coin into a river is generally considered auspicious. But this also has a scientific reason. In the olden days, coins were made from copper, a metal which is extremely beneficial to the human body. In those days the only source of drinking water was rivers. So that all would get water fortified with copper our forefathers would throw coins into the river. Now however such coins have become obsolete. 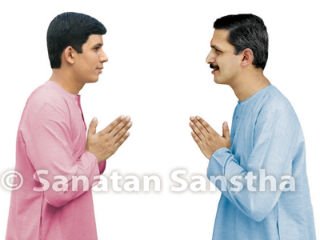 In Bharatiya culture the posture of greeting with namaskar was meant to express respect towards another. However from the scientific viewpoint by approximating both hands the tips of fingers of the hands touch each other bringing about acupressure. These tips are pressure points for eyes, ears and the mind according to the Acupressure therapy technique. This posture activates those pressure points helping you to remember the one you are offering obeisance to for long. Besides the spread of germs by shaking hands with another is prevented.

The scientific reason for married women wearing a toe ring on the second toe is for development of the womb. It also controls blood flow to the womb and regularises the menstrual cycle of the woman. As silver is an excellent conductor of electricity energy frequencies coming from the earth get attracted to the toe ring and get assimilated in the body.

Since time immemorial the midpoint between both eyes on the forehead, where tilak is applied is considered an important center of control in the human body. Applying tilak prevents the loss of energy. When red tilak is applied at this point, the energy of the body is preserved and also the concentration at various levels is controlled. When applying a tilak, spontaneous compression occurs in the mid brow region over the Adnya Chakra. This facilitates blood flow to facial muscles.

5. Ringing bells in the temple

Before entering the sanctum sanctorum of a temple devotees ring the bell there. As per Agam Scriptures this drives off negative energies and the Deity too is fond of the sound of a bell. Scientifically the ringing of a bell removes unwanted thoughts in the mind, makes the intellect sharp and increases devotion. The bell is designed in such a way that when rung the right and left sides of the brain blend with each other. When the bell is rung the sound frequencies emanating from it are clear and its echo lasts for at least seven seconds. As the seven spiritual healing centers (chakras) in the body are active at that time the negative thoughts in the mind are destroyed.

In the Hindu Dharma the Holy basil plant is accorded the seat of a mother. In many regions worldwide the Holy basil plant is endowed both religious and spiritual importance. In the Vedic period Sages were aware of the benefits of the Holy basil plant hence that plant received the status of a Deity. These Sages advised both the educated and illiterate members of society to grow this plant which is life-saving for man, possesses a number of medicinal properties and is an excellent germicidal. Drinking its juice daily increases the immunity of the physical body, protects from disease and maintains physical fitness increasing the lifespan. A Holy basil plant in front of the house keeps mosquitoes and other insects away. It is said that a snake does not dare to go close to this plant. That is why in the olden days Holy basil plants were grown all around the house.

The Holy fig tree gives shade. It also has more benefits about which the common man is ignorant because it neither bears sweet fruit nor its wood is useful. At night however this tree emits oxygen about which our forefathers knew hence they protected and nurtured these trees and gave the tree the position of a Deity.

8. Not sleeping in the north-south direction with feet facing the south

It is believed that sleeping with feet towards the south invites negative energy attacks or premature death. This also has scientific explanation. The human body has its own magnetic field called the ‘magnetic field of the heart’. This field is regulated by circulation of blood. The earth is a huge magnet. When we sleep with feet facing the south as the magnetic field gets disturbed diseases of blood pressure and heart may develop. Human blood contains iron which attracts a magnet so by sleeping with feet facing the south the iron from the body accumulates in the brain leading to headache, memory loss, inability to identify objects and extensive degeneration of the brain.

9. Eating by sitting on the floor 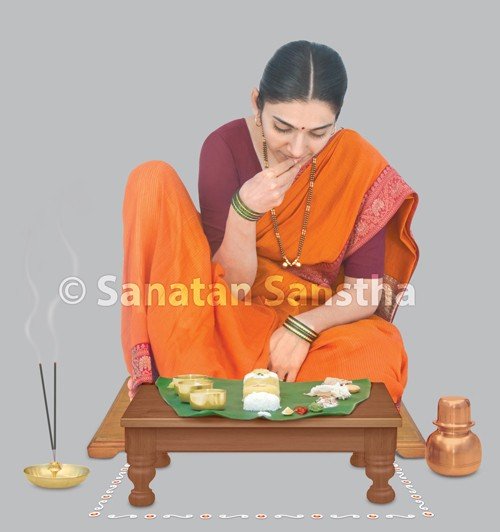 This is not a mere custom. The posture adopted when eating on the floor is called ‘sukhasan’ as taught in yogic exercises. This posture improves and enhances the process of digestion in the body. On the other hand eating by sitting with a chair on a table or in standing posture can lead to indigestion.

10. Offerings to the Sun Deity

In the Hindu Dharma it is a custom to offer gratitude to the Sun Deity every day through an offering. The main reason for this is benefit to the eyes by sun rays directly falling on the eyes. or indirectly through their reflection in the water being offered. Besides as the offering is done in the morning the good habit of waking up early develops. The first prahar (three hours) of the day is the best for any ritual to yield results.

12. Women applying kunku (vermilion)
on the forehead or sindur (a red powder) in the hair parting

Married women applying vermilion also has a scientific reason. Vermilion is made from turmeric and sindur from mercury. Vermilion controls blood pressure and makes marital life blissful. That is precisely why widows are forbidden from applying vermilion on the forehead. Maximum benefit of applying sindur is obtained when it is applied from the forehead to the Sahasrar chakra on the crown of the head. (After the fire sacrifice of the marriage ceremony is performed amidst recitation of a mantra, the groom should apply sindur to the parting of the bride according to the Holy text Vivahprayog. The Gurucharitra (Chapter 31, Holy verse 58) states that to prolong the life of the husband the wife should apply vermilion, turmeric and sindur on her forehead (sindur and shendur (this is a saffron powder) are different) and kajal (lampblack) to her eyes. Should wear a mangalsutra (two strands of black beaded necklace) around her neck and stick a comb in her hair. This reference being from the Gurucharitra, it is clear that women used to apply sindur every day. – Priest seeker Mr. Damodar Vazhe). Mercury helps in reducing anxiety however the vermilion produced today does not contain mercury.

13. Applying henna to the hands 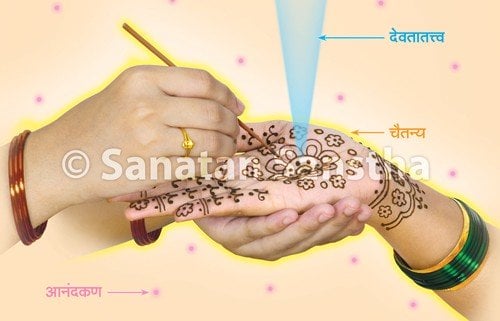 Application of henna to the hand is not just cosmetic, to produce dyed designs on the hand but it also has medicinal properties. In ceremonies such as weddings there are chances of developing headache and fever due to stress. As the wedding date approaches anxiety grows in the groom and bride affecting their physical and mental health adversely. Application of henna cools the body and reduces mental stress. Hands and feet are rich in nerve plexuses so application of henna here helps in reducing stress.

In humans, movement of the wrist is more than other parts. Also, when diagnosing a disease, the pulse at the wrist has to be examined. Friction of the bangles worn by women improves blood circulation. Also, energy from the aura of the body instead of dissipating into the environment is conserved in the body because bangles are rounded and do not have pointed tips.

15. Paying obeisance by touching the feet

Generally, obeisance is paid by touching the feet of the elderly or Holy men. When they accept your obeisance, which is devoid of ego, positive energy is emitted from their hearts and energy filled with compassion from their toes enters your body through your hands. In this way the circuit of energy flow gets completed increasing the universal energy. Hence there is merging of the minds and hearts of two embodied souls. Though a similar process occurs through a handshake or an embrace the benefit is limited. When you offer obeisance with approximated hands you are a beggar and the one in front of you is the donor.

16. Swallowing Holy basil leaves instead of chewing them

In the Hindu Dharma the Holy basil plant is considered as the wife of Shrivishnu. Hence chewing of these leaves is prohibited. From the scientific viewpoint the metal mercury is present in Holy basil leaves in large amounts. By chewing these leaves mercury coats the teeth weakening them with chances of their early fall. Hence Dharma advises that Holy basil leaves be swallowed and not chewed.

Shraddha
Ritual performed on the death anniversary according to Hindu Almanac, to appease departed ancestors? subtle bodies
Prahar
A time of a day (a day is divided into 3 hour segment called prahar)
Dharma
Righteousness
Gurucharitra
Composition on the life of Shripad Shrivallabh and Nrusinh Saraswati, the Incarnations of Datta - the Guru of all Gurus)
mantra
A syllable or words representing spiritual reality or an aspect of God uttered to protect oneself or to achieve a specific goal