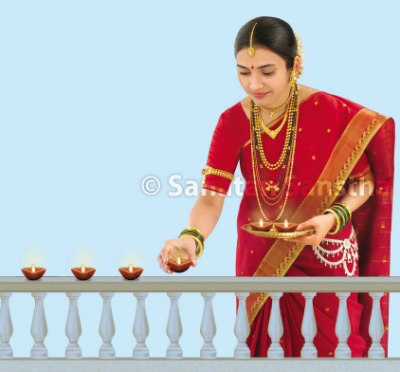 The word Diwali has originated from Deepavali, which in turn is formed as deep (lamp) + avali (row). Deepavali is thus a row of lamps. During Diwali, lamps are lit everywhere.

It is celebrated on four consecutive days – Dhantrayodashi (the thirteenth day of the dark fortnight of Ashvin), Narak Chaturdashi (the fourteenth day), Lakshmi-puja (the new moon day of the dark fortnight of Ashvin) and Balipratipada (the first day of the bright fortnight of Kartik). Some exclude Dhantrayodashi and consider only the remaining three days as Diwali. Since Vasubaras and Bhaiduj respectively precede and follow Diwali, they are included in it. However, in reality they are separate Holy festivals.

When Lord Ram returned to Ayodhya after completing fourteen years in exile, His subjects celebrated by lighting lamps. Since then, the festival of Diwali has been celebrated.

‘By killing the demon Narkasur, Shrikrushna freed people from an attitude of indulgence in worldly pleasures, jealousy, unrighteousness and negative attitudes and made them happy by giving thoughts of God (or Divine thoughts), which is what Diwali is about. We have been celebrating Diwali year after year merely as a custom. Today the festival has lost its true meaning. If after comprehending this hidden meaning our knowledge is kindled, then the ignorance in the form of darkness will reduce. Also, the domination by people with demoniacal tendencies of enjoying worldly pleasures and indulging in unrighteous attitudes, over the righteous, will reduce.

On the eve of Diwali, lamps should be lit in a row both inside and outside the house. This gives the house a beautiful decorative look and generates enthusiasm and joy. Earthen lamps lit with oil have a more decorative and soothing effect than a string of electric bulbs. The word deep actually means a flame of a wick soaked in oil. The Shrutis say –

Meaning : ‘Go from darkness to light’.

Those who do not light lamps on these three days remain perpetually in darkness; they cannot go towards light, that is, spiritual knowledge. Offering lamps attracts Lakshmi. Each one should celebrate the Religious festival of Diwali with enthusiasm so that Devi Lakshmi perpetually inhabits the home and he/she is enlightened with spiritual knowledge. This helps maintain happiness and prosperity in the family.

The ritual of its installation is as follows –

A small portion of ground close to the house should be smeared with cow dung. It should be sprinkled with water containing sandalwood paste and then an eight-petalled lotus should be drawn on the ground. A pole of either 20, 9 or 5 arm’s length should be pitched in the middle of this spot. It should be decorated with cloth, festoons, eight bells and a pot. An eight-petalled lantern should be made and hung on the pole. A big lamp should be lit in that lantern. Eight lamps should be lit around this lantern, one in each petal of the lotus for Dharma, Har, Bhuti, Damodar, Dharmaraj, Prajapati, Pitar (deceased ancestors) and preta (Dead body). Sesame oil should be used to light the lamps. Then, panchopchar puja (ritualistic worship with five substances) of the lamp should be performed and the lantern should be raised on the pole reciting the following mantra –

Meaning : I offer this lit lamp to Damodar, the Almighty Supreme God. I pay obeisance to that radiant Deity Anant. The result of this ritual is acquiring wealth.’

Sanatan akash-kandil, which creates
awareness of duty unto Dharma and Nation

‘That which takes one from darkness to light’ is the true meaning of Diwali. Today, the Hindu Dharma is being harmed in many ways and the Nation (Bharat) is heading towards destruction. Hindus need to become aware of their duties unto Dharma and Nation and get ready to protect them. Only if this happens can Diwali be celebrated as per the above ideology. To send this message across to the masses, Sanatan makes akash-kandils which carry information on bringing about awakening on Dharma and Nation. 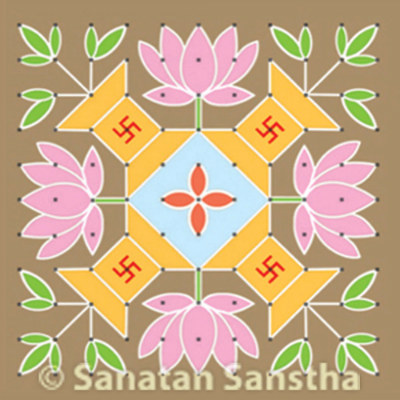 During the days of Diwali, rangolis are drawn in the courtyard and at the entrance of the house.