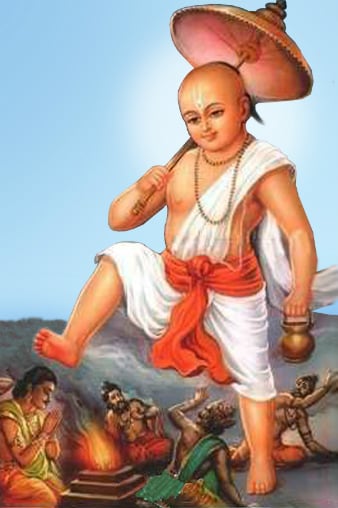 The story goes thus – King Bali was immensely generous. He used to gift a guest with whatever he asked for. ‘Though generosity is a virtue, an excess of any virtue becomes a defect. Who should be given a donation when and where is clearly defined in the scriptures and the Holy Gita. Offerings should be made to the deserving; not to the undeserving. If the wealth goes into the hands of the undeserving, they become arrogant and start misbehaving. King Bali would give anything to anyone. Shri Vishnu incarnated as Vamanavatar in the form of a munja (a boy whose thread ceremony is done). The little munja is supposed to ask for alms saying, ‘ॐ भवति भिक्षां देही ।’. When Shri Vishnu incarnated as Vaman, and approached King Bali for alms, the King asked Him what He wanted. Vaman asked for land, which three of His footsteps would cover. Unaware of who Vaman was and not realising the consequence of this offering, the King agreed to fulfill His wish. Immediately Vaman assumed a huge form and covered the whole of the earth with one footstep. With the second He covered the sky and then asked King Bali, “Where shall I place the third footstep?” King Bali then replied, “Place the third step on my head.” Having planned to send King Bali to the nether region by placing the third step on his head, Vaman said to the King, “Ask for any boon that you wish.” The King then asked for the following boon – “That my entire kingdom on the earth will now come to an end and you will send me to the nether world, let this event of taking the three steps be remembered every year on the earth as my reign. O Lord, let not one doing ‘deep-dan’ (donating a lamp) suffer the anguish inflicted by Lord Yama, let him not suffer untimely death and let Devi Lakshmi dwell in his household always.” Those three days are Ashvin Krushna Chaturdashi, Ashvin Krushna Amavasya and Kartik Shukla Pratipada. This is called Balirajya (Bali’s reign).

As promised to King Bali by performing Yamadeepadan (Offering a lit lamp to Deity Yama, the Deity of death) on the three days of Diwali – Ashwin Krushna Paksha Chaturdashi, Ashwin Amavasya and Kartik Shukla Paksha Pratipada the fear of premature death is averted and Deity Lakshmi dwells in the home of those following Dharma (Righteousness). By declaring that King Bali will rule the earth for these three days, God respected this great devotee despite being a demon and blessed him. This clearly highlights the three virtues of God of remaining truthful to principles, love for devotees and generosity.

2A. Implied meaning – Remember King Bali who
attained Divinity by serving the people as service unto God

Bali is worshipped on Balipratipada. Despite taking birth in the daemonic lineage, due to his merits Deity Vaman showered him with His grace. He served the public considering it as a Divine mission. He was a sattvik and generous king. As every human being is ignorant to begin with, he performs wrong actions but with knowledge and God’s grace he can attain divinity is this example about. Meritous actions performed fearlessly in this way leads to losing fear of death. Even Deity Yama becomes a friend and brother of such a person. On this day God has shown us through the example of Vaman Incarnation that He is prepared to become even the servitor of the one who surrenders everything to Him. Despite being born in the family of a demon, due to his generous attitude and offering everything to God with surrender, God guided him appropriately, changed his life and uplifted him. Discarding relishing thoughts that are conducive to demoniacal attitude in his kingdom, he sowed the seed of sacrifice and instilled Divine thoughts in the mind of his subjects making their life happy and prosperous.

This is the half amongst the three and a half muhurts in a year. This is celebrated as the New Year’s Day according to the Vikram Samvat.

Akshay trutiya, Gudhipadva, Vijayadashami (Dasra) are the three full muhurts while Diwali Padva is the half muhurt. On these muhurts the Parashakti of God is radiated into the universe. Due to the effect of this energy, the Sattva component from the universe gains momentum and auspicious frequencies are transmitted everywhere, in turn nurturing and activating the virtues. Hence on these three and half day muhurts several auspicious activities are performed.

4A. Worship of Bali

On Balipratipada five coloured rangoli of the pictures of King Bali and his wife Vindhyawali is drawn on the ground and worshipped. Lamps and clothes are donated in the name of Bali.

The Scriptures recommend the worship of Bali and his wife as ardent devotees of Deity Vishnu. This helps to develop devotion akin Bali for Deity Vishnu within the worshipper. By offering Bali a lamp with a spiritual emotion of surrender, a fraction of fire gets offered to him by which the demon king gets appeased and thereby protects the worshiper from distress caused by demons. By offering King Bali the clothes which represents reproductivity of the earth, the worshipper receives his grace and becomes prosperous.

4B. The wife performs aukshan (Ritual of waving
a lit lamp in front of an individual) of her husband

On this day after abhyangasnan (Bathing after an oil massage) women perform aukshan of their husbands.

A man symbolises Deity Shiva and a woman, Deity Durga. On this day after abhyangasnan in the morning, women perform aukshan of their husbands. Hence the Durga Principle within the wife gets activated and after she performs aukshan of the husband, the kundalini (Dormant spiritual energy) in him gets activated thereby awakening the dormant Shiva Principle in him. By performing aukshan in this manner both the husband and wife benefit spiritually.

In the afternoon a rich meal with delicacies is served to Brahmans (Hindu priests).

Serving a meal to Brahmans pleases Deities of Dharma. On this day since the special delicacies are prepared, Vishnu Principle gets activated in the environment. The frequencies of sattvikta and Chaitanya (Divine Consciousness) from the environment get attracted to the delicacies.

Except for the actions prohibited by the Scriptures people may behave as per their will in the kingdom of Bali. Consumption of banned food, drinks and travelling to barred areas are prohibited actions hence on these days people elevate spirits by lighting fireworks but do not consume alchohol ! Since the Scriptures permit, by tradition, people enjoy themselves on these days.

On this day one should not consume asattvik drinks or food and should not indulge in intercourse. If an individual complies with this then his behaviour becomes pure and the sanskar (Subconscious impression) of sattvikta gets ingrained on its mind. Besides by restraining sense organs it helps in gaining control over them. In this way by performing sattvik actions the dormant sattvik attitudes within it gets awakened. If one indulges in enjoyment to derive sattivik happiness, in keeping with the sattva component, then there is no objection to it as per the Scriptures.

On this day adorning new washed clothes people spend the entire day in fun and frolic. There is a practice of peforming Govardhanpuja on this day. A mountain is sculpted using cowdung and durva (A fragrant grass used in the ritualistic worship of Shri Ganesh) and flowers are tucked into it. Pictures of Shrikrushna, Indra, cows and calves are arranged alongside are worshipped along with the mountain and are taken out in a procession.

Reference : Theoretical information on festivals is given is Sanatan’s Holy text titled ‘The appropriate method of celebrating a festival and the underlying science Part 1, Vol.1.’ The spiritual analysis is from subtle-knowledge received by Miss Madhura Bhosale.

Subtle : Gross senses of an individual are the physical five sense organs viz. nose, ears, eye, tongue and skin. That which is beyond the perception of five sense organs, mind and intellect is subtle. Some spiritually evolved individuals perceive these subtle sensations. A mention of subtle-knowledge exists in various Holy texts.