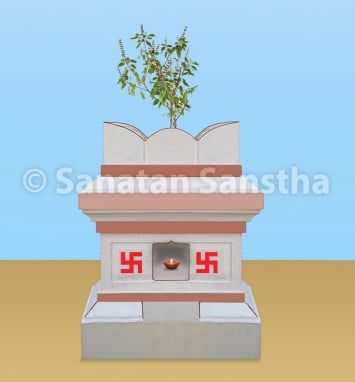 This ritual may be performed on any day from Kartik Shukla Dwadashi (Twelfth day of the bright fortnight of the month of Kartik) till Pournima (full moon of Kartik).

During this period the energy (Shakti) and Divine consciousness (Chaitanya) of Shrivishnu are active in the universe at a subtler level; hence this ritual is performed.

This ritual consists of uniting Shri Vishnu [an Idol of Balkrushna (Infant Shrikrushna)] and the Tulsi (Basil plant) in wedlock. In ancient times, the practice of child marriage was prevalent. On the eve of the wedding, the Tulsi-vrundavan (A small rectangular structure in which the tulsi is grown) is painted and decorated. Sugarcane and marigold flowers are placed in the Tulsi-vrundavan and tamarind and gooseberries are placed at the base of the plant. The wedding ceremony is performed in the evening.

2A. Substances used in Tulsivivaha

All rituals undertaken in the four months of Chaturmas culminate with the Tulsi Vivah. All food items that are forbidden during the Chaturmas are offered first to a Brahman and then partaken.

In the four months of Chaturmas several rituals from the Path of Rituals (karmakand) are observed. After culmination of Tulsivivaha the period of ritualistic actions in the gross is over. Hence the food items prohibited during Chaturmas as per rules and regulations (yama-niyam) are offered to a priest. Thus these prohibited food items merge into the priest (brahman Principle) existing in the form of Dharma and the worshipper is granted permission to partake of that food item by the Deity of Dharma (Dharmadevata).

Reference : Theoretical information on religious festivals is available on Sanatan’s Holy text titled ‘Appropriate method of celebrating festivals and the underlying science’ Part 1, Volume 1,  and the spiritual analysis of religious festivals has been received by Miss Madhura Bhosale in the subtle.

Principle of the Deity, active three components and their benefits 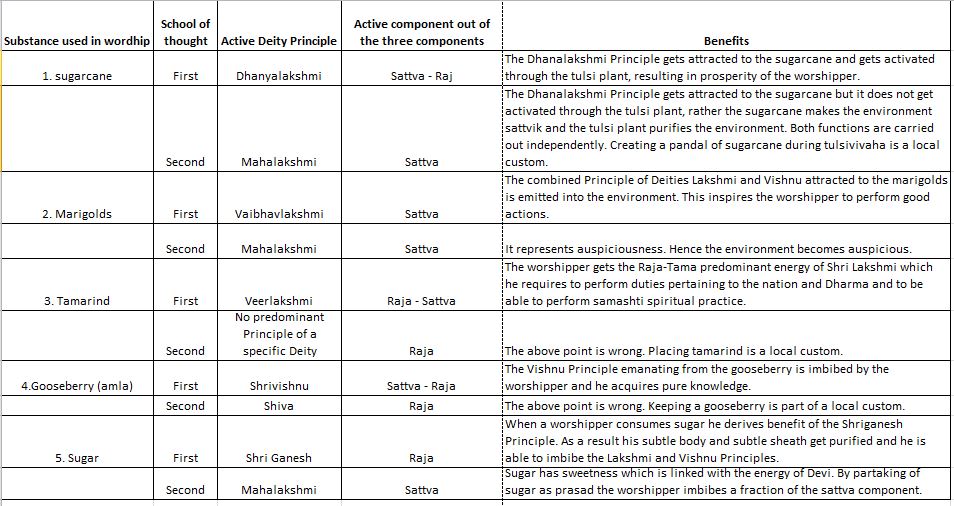 Note for the readers

Some individuals who have made spiritual progress can perceive subtle sensations. A mention of this subtle knowledge is made in different Holy texts.