Dharma (Righteousness) has doctrines but no rules. A rule can have exceptions, a doctrine cannot. A doctrine does not change, meaning it is timeless. Likewise, since God has not changed since times immemorial, the doctrines of seeking God too have remained unchanged. Since these doctrines do not change, Dharma, too, does not change. – H.H. Kane Maharaj, Narayangaon, District Pune, Maharashtra.

Some doctrines of Dharma are elucidated further. 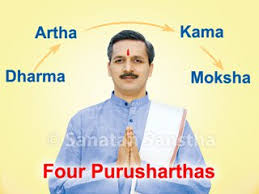 Dharma believes in the existence of God. Creation, Sustenance and Dissolution of the universe are all under God’s control.

2. Multitude of Deities and numerous paths of spiritual practice

Often in Hindu Dharma, there is mention of 33 crore Deities. Hindu Dharma mentions a whole lot of paths of spiritual practice. Really speaking, there is only one God. Therefore, many may wonder, what is the necessity of 33 crore Deities for devotion unto Him or for that matter, what is the necessity of so many paths of spiritual practice for reaching Him.

God manifests in various forms for accomplishing different missions. These forms of God are known as Deities. Besides, a dictum in Spirituality says ‘There are as many temperaments as there are people and corresponding number of paths of sadhana (Spiritual practice)’. The population of earth is over 60 billion. No two individuals amongst these 60 billion resemble each other. Each has a different body, mind, likes-dislikes, virtues and personality defects, hopes and ambitions, desires etc. Each has a different intellect, sanchit (The accumulated give-and-take account, which is created as a result of willful karma [An act]) and destiny; proportion of the three components, namely Sattva, Raja and Tama in them is also different. Therefore, worship of which Deity will help an individual reach God will also vary. Moreover, God exists not just in living beings but in inanimate things too; hence, there are number of Deities in Dharma.

It is difficult for an ordinary human to worship God in the nirgun (Non-materialised) form; that is why, people worshiping the sagun (Materialised) form felt the need for an Idol and they took to the Path of Idol worship.

4. The concept of four debts

A. Debt unto God

Human beings get easy access to the objects created by God; hence, they become indebted to the Deities.

B. Debt unto Sages

Human beings keep acquiring the knowledge generated by the ancient Sages; hence, they become indebted to the Sages.

D. Debt unto the society

Apart from this, every person with whom we have come into contact has given us something directly or indirectly. This is the debt unto the society.

Every individual has to repay these four debts.

5. Concept of classes and the stages of life

There are four ashrams, namely Brahmacharyashram (First among the four stages of life – stage of celibacy), Gruhasthashram (Second – stage of a married householder), Vanaprasthashram (Third – stage of retired householder) and Sanyasashram (Fourth – stage of a renunciant). The four classes are – Brahman, Kshatriya, Vaishya and Shudra. The aim of the system of stages of life is to bring about progress in personal life and that of system of classes is to bring about the progress of society. People should assist each other and achieve supreme prosperity (supreme happiness). The motive of the system of classes, too, was achievement of excellence by each class in its own sphere, leading to the welfare of the society.

6. Concept of the basic pursuits of life

The Scriptures prescribe four Purusharthas – Dharma (Righteous conduct), Artha (Acquisition of wealth by honest means), Kama (Desire or sexual desire, third pursuit of life) and Moksha (Final Liberation). Among the other three Purusharthas, Kama (which aims at enjoying life) is considered to be inferior. Purusharthas of Artha and Kama are placed between Dharma and Moksha. The arrangement is such that one has to start with Dharma and finally attain the Purushartha of Moksha. Dharma or Moksha alone cannot be the goal of life. They also require the support of Artha and Kama; however, they should be in accordance with Dharma. One should acquire wealth (धर्मेण अर्थः ।) and fulfill desires through conduct as per Dharma (धर्मेण कामः ।). Amongst the Purusharthas, Moksha is considered to be the supreme Purushartha, meaning the ultimate goal of human existence. Moksha is certainly superior to Dharma; however, it remains a fact that the duty as defined by Dharma, has to be fulfilled first.

7. Restraints (penalty) for those
with an unrighteous conduct and non-violence

If unrighteous conduct is not curbed then, we have to endure the demerits of an individual’s unrighteous behaviour. Punishing an unrighteous person does not amount to violence. The meaning of violence should not be taken as inflicting unhappiness; it should be taken as causing harm. When punishing an evildoer, the aim is not to make him unhappy; rather to alleviate the harm caused to him and also to allow him to attain a higher quality of happiness acquired by following Dharma.

The doctrine of karma says that one has to face the consequences of merits and demerits done in this birth, in future births. Similarly, one experiences happiness and unhappiness in this birth based on the sanchit created in past births. One cannot escape the outcome of a karma.

An individual can merge with the Supreme God completely even when alive in this world. This has been exemplified by numerous highly evolved Sages, Ascetics and Saints in the past and even today.