How should we pay obeisance when meeting someone ? 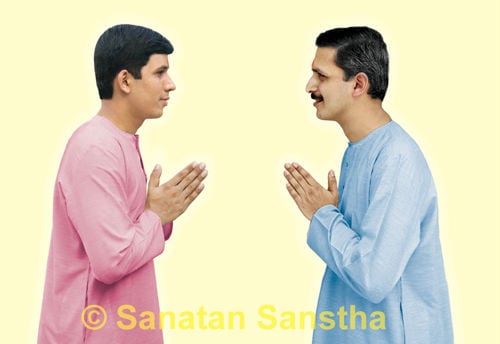 ‘When meeting someone, (Individuals of the same age-group) pay obeisance by joining fingers of the hands and holding the tips of the thumbs at some distance from the Anahat-chakra. This type of obeisance increases bhav of humility in the jiva. Sattvik waves from the Universe are then attracted by the four fingers and transmitted all over the body, which awakens the Anahat-chakra. This activates the Atmashakti of the jiva. Similarly, by paying obeisance to each other, waves of blessings are emitted towards each other. This helps both in benefitting from the awakened Divine Principle in the other.’

Nowadays, perhaps due to ignorance about the Science of Spirituality and our culture or the increasing influence of the western culture, many people shake hands.

It is not appropriate to shake hands 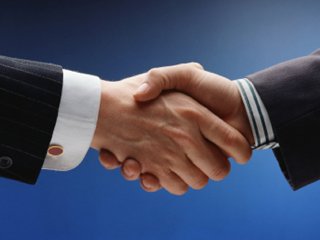 1. While greeting with a handshake, germs of diseases can be transmitted to one another through the medium of the hand. Besides, some people do not have a habit of washing their hands after eating or after an outing. Under such circumstances, a handshake could be dangerous to health.

2. ‘A handshake reduces humility and nourishes Tama temperament. When two individuals shake hands, the Raja-Tama vibrations emitting from their hands get accumulated in the void formed between the two palms. The energy generated in this void due to friction enters the bodies of the individuals through their palms. Also, the subtle-particles radiated by this energy pollutes the environment surrounding the jiva, making it Tama-predominant. The movement of these Raja-Tama particles in the body activates the Suryanadi and results in intense rise in the
movement of Tama particles in the body. This affects the manomay-kosh, thus increasing the Tama particles in it and starts causing irritation to the jiva.

Hence, it is advisable to avoid such a Tama-predominant act of handshake, and bring into practice the act of doing namaskar that teaches the jiva to be humble and also increases the sattvikta in the jiva. Hence, the jiva gets Chaitanya based strength to perform various acts. Along with the blessings endowed with Sankalp-shakti (Energy of resolve), his act becomes sadhana and attains completion in lesser time.’