While having darshan (Vision) of a Deity or after meeting a respected individual, our hands automatically join in obeisance. ‘Paying obeisance’ that is doing namaskar is a sattvik (Sattva-predominant) impression on the Hindu mind, an act of maintaining the rich heritage of Hindu culture. Paying obeisance is a simple and beautiful act of expression of Divine qualities like devotion, love, respect and humility that bestows Divine Energy. 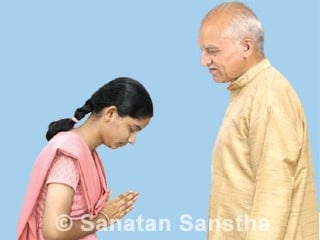 Without humility no act becomes meaningful. Due to humility, the flow of Chaitanya (Divine consciousness) that descends for the benefit of the subtle body, transforms every act into sadhana (Spiritual practice), thus making the entire process meaningful.

The main objective of paying obeisance to someone is to derive spiritual as well as worldly benefits from him.

By paying obeisance to a Deity or a Saint, unknowingly their virtues and capabilities come to our mind. Accordingly, we start emulating them, thus changing ourselves for the better.

2. Why should we always pay obeisance to elders ?