While having darshan (Vision) of a Deity or after meeting a respected individual, our hands automatically join in obeisance. ‘Paying obeisance’ that is doing namaskar is a sattvik (Sattva-predominant) impression on the Hindu mind, an act of maintaining the rich heritage of Hindu culture. Paying obeisance is a simple and beautiful act of expression of Divine qualities like devotion, love, respect and humility that bestows Divine Energy.

1. Why do we pay obeisance to the steps while entering a temple? 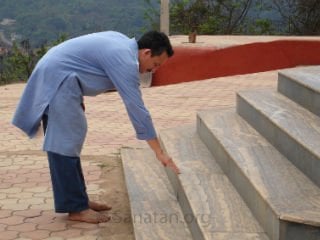 One should touch one step with the fingers of the right hand and move the same palm over the head.

Due to the movement of waves of Deities in the area around a temple, sattvikta is enhanced there. The presence of Chaitanya (Divine consciousness) in the area charges the steps of the temple too. Hence, there is a tradition of touching the steps with the fingers of the right hand and then moving the palm over the head. From this we understand that since the dust accumulated on the steps is also charged with Chaitanya, we have to respect it too and avail the benefit of Chaitanya in it as well. If the jiva has a bhav (Spiritual emotion) that, ‘the Chaitanya of the Deity, with which the steps have been charged is spreading all over my body through the hand’, it gives increased benefit to the jiva.

2. Why should we pay obeisance by standing next to
the statue of Nandi in a Shiva temple and Tortoise in other temples ?

Sashtang namaskar means surrendering to God in all the three ways – physical, verbal and mental. This way Atmashakti (Energy of the soul) is awakened, which purifies the gross and the subtle body.

4. Paying obeisance to the Deity with the hands joined 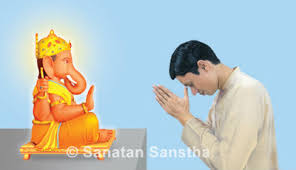 Whenever it is not possible to perform ‘sashtang namaskar’, pay obeisance with the hands joined.

5. Why do we place our head on the
big toe of the Saint’s feet for paying obeisance ? 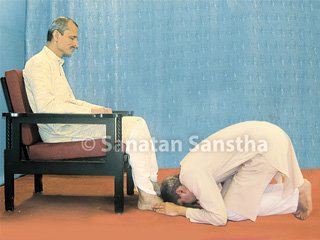 While paying obeisance to a Saint, place your head on the big toe of the Saint’s feet and place both the palms on the feet.

We can imbibe maximum Chaitanya through the Brahmarandhra. The part of head beginning above the forehead should be placed on the feet of Saints. Due to this, the Chaitanya emanating from the feet can enter to the maximum in the one paying obeisance.