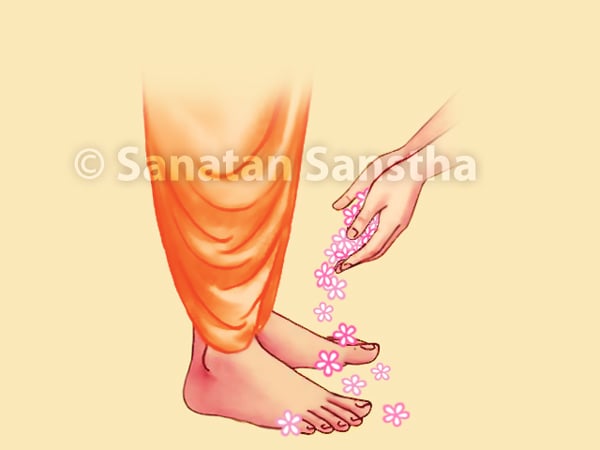 Today, the daily life of most people is filled with hectic activity and problems. One who imparts precise knowledge on appropriate spiritual practice for acquiring peace of mind and Anand (Bliss) and how to perform it is none other than the Guru. Saint Tukaram Maharaj says, without the help of a Sadguru, we cannot find our path to Moksha (Final Liberation); hence, we should first hold the Guru’s feet, that is, we should make efforts to obtain His grace. In the life of a disciple, the Guru holds supreme importance; because a disciple cannot realise God without the Guru. Through this article let us understand origin and meaning of Guru, different forms of Guru and the greatness of Guru Principle.

Meaning : ‘Gu (गु)’ refers to darkness assuming the form of ignorance and ‘ru (रु)’ to the radiance in the form of spiritual knowledge, which dispels this darkness. Thus, the Guru is the one who dispels the darkness of ignorance.

1B. Shrī Gurugītā describes several origins of the word ‘Guru’.

Meaning : ‘Ga (ग)’ in ‘Guru (गुरु)’ bestows siddhīs (Supernatural powers), ‘ra (र)’ alleviates sins and the ‘ou (उ)’ is the unmanifest Shrīvishṇu (Vairation – Shiva). In other words, Guru is supreme, the embodiment of these three.

Some definitions and meanings of the word ‘Guru’ are provided ahead.

3A. A disciple’s faith

3B. Answer clarifying the doubts

A question expressing doubt is the disciple and its answer clarifying the doubt is the Guru. So long as the darkness of ignorance in the form of questions is not eliminated and one does not obtain knowledge by constant clarification of the doubts, this debate will continue. In reality, the Guru and the disciple are one and the same.

Anand
Bliss
Gurucharitra
Composition on the life of Shripad Shrivallabh and Nrusinh Saraswati, the Incarnations of Datta - the Guru of all Gurus)