There are multiple carvings on the walls of compound of the temple. The left and right sides of the main entrance bear carvings of scenes of war. It contains the scenes of war between Khmer (Cambodian) and Champa (Vietnamese) soldiers. ‘Bayon’ means ‘Enlightenment’. Buddha is said to have attained enlightenment under the Banyan tree on the 49th day. Therefore this temple bears 49 faces of Buddha. The famous Ta Prohm temple is located on the eastern side of the Angkor Thom temple premises. It is said that this temple was built at the end of 12th century by King Jayavarman VII for his mother. In the 10th century, King Rajendravarman II ruled Yashodharpura. He gave away a huge piece of land to his 2 ministers who established a town named ‘Ishwarpur’ there. It is now known as Phnom Dei village, Cambodia. In the center of the town they built a temple ‘Tribhuvan Maheshwar’ or ‘Banteay Srei’. 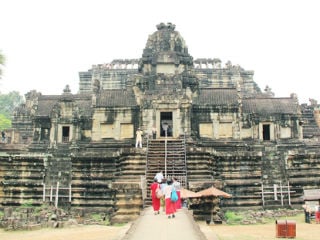 In a short distance from Bayon temple in Angkor Thom area, we come across a pyramid shaped huge temple in ruined form. This is called as Bapun temple. 11th century King of Yashodharpura, Udayadityavarman II was a devotee of Deity Shiva. 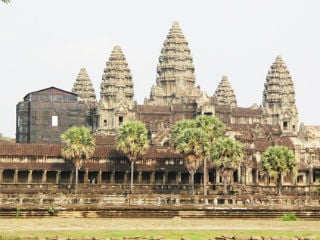 The land which was referenced as Kambhoj country in Mahabharat, is todays Cambodia! Hindus resided here till 15th century. It is said that Hindu empire by the name Khmer ruled Cambodia from 802 AD till 1421 AD.