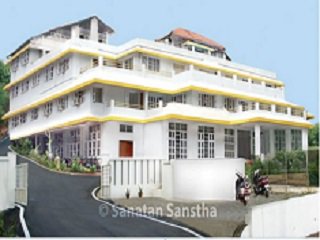 The uniqueness of these ashrams is that all seekers living in the ashram despite following different paths of spiritual practice and belonging to different communities, live together harmoniously in happiness and love. Today Bharat is infested more than ever before with hatred of casteism, yet in Sanatan’s ashrams there is no casteism. Every seeker views a co-seeker with the spiritual emotion of a guru brother or sister. Thus the Sanatan ashram has become a family with hundereds of seekers. Paratpar Guru (Dr.) Athavale has shown through these ashrams that with God-realisation as the objective a united society can be created and an experience of Shriram’s rule of righteousness can be derived.

B. Various missions pertaining to the nation and
Dharma being carried out in different ashrams of Sanatan

This is the headquarter of Sanatan Sanstha

B1 A. Office of Sanatan Prabhat periodicals

This includes seekers performing the tasks of editing, reporting news, composing the news on the computer, those collecting advertisements, those tying the newspapers into bundles in the printing press or those recovering dues of payment of the periodicals. These seekers have sacrificed their lives for protection of nation and Dharma at the level of thinking.

These are young seekers who have acclaimed masters in Information Technology and have given up high salaried jobs to render seva. They maintain Sanatan’s websites meant for spreading awareness of Hindu Dharma through self-inspiration and have raised their levels to the international standards.

In this section Holy texts compiled by Paratpar Guru (Dr.) Athavale are translated into Hindi, English, Gujrati and Bengali. This includes seekers of all age groups from students to 70 years old who do typing, compilation, formatting, layouting on computer etc.

This section has approximately 20 artist seekers who are involved in art for God-realisation and not for deriving worldly happiness through the medium of art. They are involved in drawing and painting sattvik pictures of Deities, rangolis, mehendis or Devnagri alphabets or in sculpting sattvik idols of Deities.

This section functioning with the objective of starting a television channel for Hindus is equipped with two ultra modern recording studios and 10 rooms for video editing.

Here research to prove the greatness of Hindu culture and the importance of Spirituality is done using scientific instruments.

This is the only museum in the world preserving objects giving experience of the subtle-world and objects of spiritual significance.

In this school student priests continuously perform religious rituals and yadnyas (Fire sacrifices) learnt by them, for protection of Dharma, as their spiritual practice.

This is the place where yadnyas are performed continuously for protection of Dharma.

This has the following offices and sections.

A. Office of Hindu Janajagruti Samiti active in the process of establishing a Hindu nation

B. Office of Mumbai edition and Western Maharashtra edition of Dainik Sanatan Prabhat

From here the mission of Dharmaprasar in Sangli District occurs.