An Ashram which is a symbol of social unity

Seekers who are devoted to the Nation and Dharma

No discrimination based on caste or class

Every seeker makes efforts for ego removal so as to achieve the ultimate goal of God-realisation. Hence, seekers do not have thoughts about caste or class etc. They do not even know the caste or class of seekers who have been staying with them for long. As a result, seekers of various castes, classes and sects reside together in the Sanatan Ashram blissfully. This proves that when people have the ultimate goal of Godrealisation, a harmonious society can be created.

Energy source for the mission of protecting Nation & Dharma

Various sections in the Ashram are creating awareness about the Nation and Dharma under the guidance of Paratpar Guru (Dr) Athavale. This Ashram has become an energy source for devout Hindus.

370 Dharmasatsangs that provide education on Dharma have been prepared and telecast on national and local TV channels. 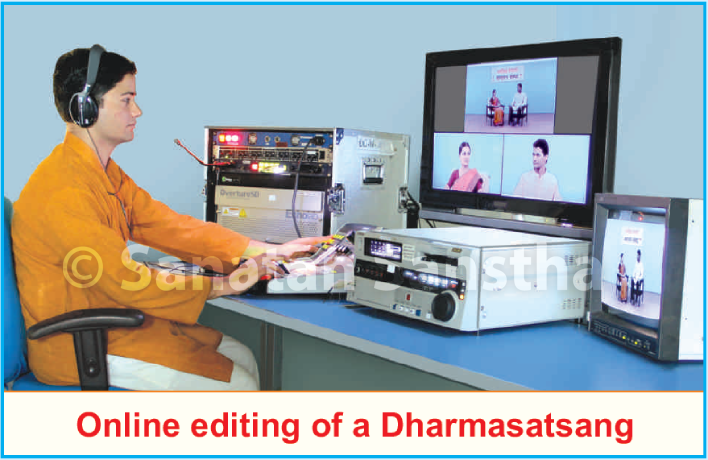 Over 7.4 million copies of 311 Spiritual texts in 17 languages have been published on Spiritual practice, Nation, Dharma etc. as of October 2018.

Awareness through periodicals and websites Awareness about the Nation and Dharma is being created through the ‘Sanatan Prabhat’ periodicals and websites such as ‘HinduJagruti.org’.

This school is functioning to mould priests who will perform religious rituals in the Hindu society as
part of their spiritual practice.