On 1.11.2016 on the occasion of Diwali Sanatan’s ashram at Ramnathi including the temple there was beautifully decorated with lit earthen lamps. The pictures uploaded here are unique ones of oil lamps from the temple in the ashram. As told by the great Saint Dnyaneshwar though the flame of a lamp is tiny it has the potential to light the entire room. Similarly these lamps representing the Hindu nation are lighting the world plunged in darkness today.

‘Due to Divine Consciousness from the ashram and the presence of Saints, frequencies of energy, spiritual emotion, Divine Consciousness, bliss and peace or those of specific Deities get attracted there and start functioning. The light emitted by the oil lamps lit at Sanatan’s ashram at Ramnathi on the occasion of Diwali is one such example.

1. Halos of the lamps lit on the occasion of Deepawali of 2016 in the ashram were reddish as a result of which the walls of the ashram too appeared red.

2. In 2017 on the occasion of Deepawali the earthen oil lamps lit in the ashram emitted bluish pink halos.

The colours seen depend on the combined effect of specific colours and specific subtle vibrations in the light of a lamp, or the light of a specific colour emitted by an object into the environment, based on its vibrations. As according to the influence of time (kal) frequencies of light from the ashram were being saturated with bliss and devotion, pink or bluish light was being emitted respectively.

Let us enjoy bliss by looking at this lighting in such a devotion enriched and blissful environment !’ 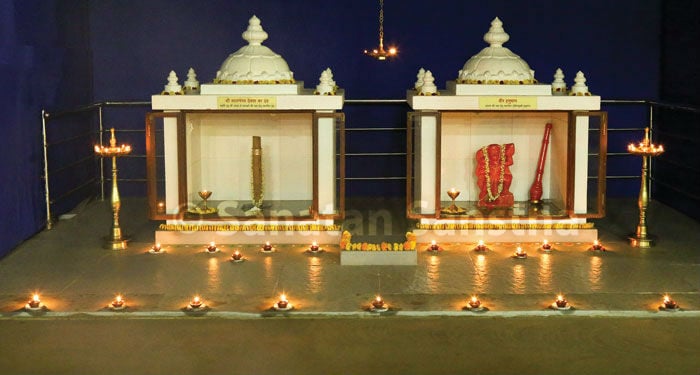 Flames of the earthen oil lamps lit near the yadnyakund (receptacle to perform the fire sacrifice) at the reception counter, appearing yellow

Meaning : Light emitted by a lamp is Parabrahman (The God Principle) Himself. The flame from a lamp is Parameshwar (Supreme God) who wipes out unhappiness in the world. May the lamp nullify my sins. I offer obeisance (namaskar) unto you.

Seekers from Ramnathi ashram had a different experience about these lamp flames  alleviating unhappiness. On 11.5.2019, the 77th birth anniversary of Paratpar Guru (Dr.) Athavale was celebrated. A festival of lights was organised to commemorate it by lighting earthen oil lamps everywhere in the ashram. The flames of the lamps lit near the reception of the ashram appeared yellow while those near the Kalamandir appeared red.

A. ‘Agninarayan (the Fire Deity) has two forms. The form in the yellow flame is the saviour form and the one in the red flame is the destroyer (marak) one.

B. Yellow flames purify the atmosphere and particles of knowledge from it spread everywhere increasing the Sattva component.

A. Red flames destroy impurities from the atmosphere thus facilitating destruction of Raja-Tama from it. It is to accomplish this mission that red flames emerged from the earthen lamps.

B. The flame of the earthen lamp appearing red indicates that the Fire Principle is assisting the battle for Righteousness. With passage of time participation of the five Cosmic Principles in the battle of Dharma against adharma (unrighteosness) will finally culminate in establishment of a Hindu nation.’

Look at Sanatan’s spiritual
research from the viewpoint of learning !

Sanatan is studying various changes beyond the intellect from the viewpoint of spiritual research. Based on the concept that ‘the curious alone is deserving of knowledge’ if the effects of spiritual practice are observed with curiosity and an attitude of learning and questioning then God Himself will bestow knowledge in this context !