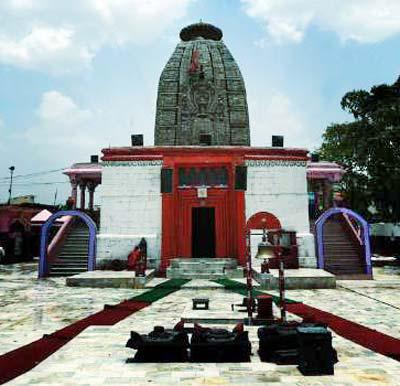 The Chat Parva or Chat puja is performed in North Bharat with great fervour. During this period lakhs of Hindus worship the Sun Deity with great devotion and spiritual emotion.

The Sun temple at Aurangabad in the Bharatiya state of Bihar is unique. It is believed that Vishwakarma (architect of the Deities) had constructed it overnight. The main door of the temple is in the west. This is the only sun temple in Bharat with the main door facing the west. Though the exact dates of its construction are not available anywhere it is believed to be one and half lakh years old. During the Chat Parva lakhs of Hindus visit the temple to worship the Sun Deity.

Unique features of the temple

This historical temple from the Treta Yug, facing the west, is also famous for its vastness along with its sculpture. It is situated at a place called Dev 18 kilometres from Aurangabad and is 100 feet tall. It is made of black and red stone and is designed like the Jagannath temple in Odisha. Outside the temple is a stone inscription mentioning the origin of the temple. As per the shloka (holy verse) in Brahmi script and translated in Sanskrit after the conclusion of the Treta Yug, the son of Ila, Purkha Ail started construction of the temple. So as inscribed in the stone the temple is 1,50,017 years old.

History of the temple

The legend behind the origin of the temple is that a king named Ail had once gone hunting to the forest. He felt thirsty and asked his attendant to get him a tumbler of water. The attendant collected water from a pit and brought it for the king. Wherever that water touched the king’s body he was cured of leprosy. When the king realised this he bathed with the water from that pit and was cured of leprosy wounds all over his body. That night the king had a dream in which he saw three idols in the pit from which he had taken a bath. The following day the king removed those idols from that pit and installed them in a temple.

In the Dev temple there are seven chariots in which the Sun Deity is presented in three forms, in stone – Udayachal (the rising sun), Madhyachal (the midday sun) and Astachal (the setting sun). This 100 feet tall temple is a unique architectural feat. No lime of any kind or any other chemical has been utilised to bring together two stones used in the temple construction. Yet stones in different shapes viz. elliptical, square, hexagonal, round, triangular have been joined together. Hence this temple is attractive and unforgettable and an unparalleled heritage of Bharat.

Every year lakhs of devotees worship the Sun Deity !

Every year during the Chat Parva lakhs of devotees from Jharkhand, Madhya Pradesh, Uttar Pradesh and other states come here to perform Chatpuja. According to the belief of the Hindus the wish of the devotee who worships the Sun Deity in this temple is fulfilled. Arghya (oblation of water) is offered to the Sun Deity for fulfilment of a desire.

The suryakund (lake) close to the temple has special significance. After bathing in this devotees performing a vrat (vowed observance), worship the Sun Deity. The chief priest of the temple Mr. Sacchidanand Pathak informed that every day the Sun Deity is woken up at 4 a.m. by ringing the bell. Then the idols are bathed and sandalwood paste is applied to Their foreheads and They are draped in new clothes. The Adityahruday stotra (holy verse) is played for the Sun Deity. This tradition has been going on for several years.

Stotra
Holy hymn; These hymns praise aspects of the divine, such as Devi, Shiva, or Srivishnu
Arghya
Water offered to the Lord as a token of respectful greeting