To study the effects on the environment
due to the fragrance emitted automatically by the pot
used by Paratpar Guru (Dr.) Athavale for collecting vomit

Saints are unique. As they go closer to God, their physical, psychological and intellectual characteristics start undergoing changes, which occur due to their sadhana (Spiritual practice because their Sattva component increases. Beside changes in the Saints, their bodies also undergo changes in the gross, meaning, their Divinity starts becoming visible in the physical dimension. This is called a ‘Divine change’. Chaitanya (Divine consciousness) in Saints also affects objects used by them. If research is conducted on such changes, many new aspects in Spirituality will come to light and the knowledge obtained will be useful to mankind. With this in mind, Paratpar Guru (Dr.) Athavale has researched the changes in His body, manifestations and room.

PIP photos here show that an ordinary pot emits negative vibrations, whereas the pot used by Paratpar Guru (Dr.) Athavale for collecting vomit while He was unwell emits positive vibrations in a higher proportion. 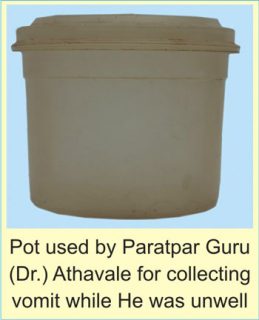 Note 1 : Since this experiment has been conducted for testing auras in the environment, when comparing photos 2 & 3 with the base photo 1, the colour of the pot & table has not been considered.

In 2007, it was observed that the pot used by Paratpar Guru (Dr.) Athavale for collecting vomit when He was unwell started emitting fragrance. This fragrance is still there. This is one example of ‘Divine changes’ in the objects used by Saints.

To scientifically study the effect of this pot on the environment, a test was conducted on 16.11.2016 in Sanatan Ashram, Goa. For the test, ‘PIP’ (Poly-contrast Interference Photography) technology that is suitable for studying the field of aura around objects and people was used. Observations and their description are given here. 1. Nature of the test

In this test, a photo of the environment was taken before an ordinary pot and the pot used by Paratpar Guru (Dr.) Athavale for collecting His vomit. This is the ‘basic observation’.

Later, photos initially of an ordinary pot and then the pot used by Paratpar Guru (Dr.) Athavale were placed on a table. After a comparative study of both photos, the effect of vibrations emitted by both pots on the environment could be comprehended.

2. Information on components in the scientific test

This is the same as the one used by Paratpar Guru (Dr.) Athavale. It was not used earlier by anyone. This pot is used only for conducting the comparative study in ‘PIP’ test.

2B. The pot used by Paratpar Guru (Dr.) Athavale

He was not well for sometime in 2007. He used to vomit often. He could not even walk to the wash basin. He used a plastic pot for collecting the vomit. He stopped using the pot after He recovered. Later, it was observed that the pot was emitting fragrance, which is still there. Saints who are authorities on Spirituality have asserted that this is a ‘Divine fragrance’.

3. Points useful in comprehending the observations

A. Basic observation (Basic aura of the environment)

To study the change in the environment due to a particular component (For example, placing a pot used by Paratpar Guru [Dr.] Athavale in this test), its photo is taken. However, since the environment is constantly changing, its photo, in which the test is to be conducted on the component, is taken before the test.

B. The principle underlying increase or reduction in the proportion of colours

C. Information on colours of the aura

The colours of the aura observed in the ‘PIP’ photo of the object (or a person) under testing denote particular vibrations in the field of energy of the object. Based on information in the manual made available by the manufacturers of ‘PIP’ computerised technology about each colour in the aura and the experience from observations in the hundreds of tests conducted by ‘Maharshi Adhyatma Vishwavidyalay’, the relationship between the colour and the nature of vibrations is decided. This aspect is depicted in 2nd vertical column of Table 4A.

F. Colours of higher than normal positive
vibrations in ‘PIP’ photo are preferable

The manufacturers of ‘PIP’ computerised technology have decided saffron and orange colours in ‘PIP’ photos to be indicators of negative vibrations. These have no relationship to the colours of actual spiritual characteristics. (For example, saffron is a symbol of sacrifice and renunciation.)

Note : To decide on the proportion of various colours in the photo, many squares are drawn on the ‘PIP’ photo by the computer programme, akin to graphs. Later, the number of total squares in the photo and a comparative number of squares occupied by the colour in the aura are counted. After converting them into percentages, the proportion of colour in the aura is finalised in percentage.

A. Observation 1 – What do colours
of the aura in ‘PIP’ photo indicate and increase or reduction in their proportion

The comparison of aura of an ordinary pot and the pot used by Paratpar Guru (Dr.) Athavale for collecting His vomit under testing is carried out with basic observation. Please note this and read Table 4A. Note 2 : The white in the ‘PIP’ photo is not noticed as completely white; similarly, its mention in ‘PIP’ manual is ‘white (silver)’. 5. Description of observations and deduction

A. Basic observation – The proportion of positive vibrations
is more due to the sattvik environment in Sanatan Ashram

B. Negative vibrations were emitted by the ordinary pot

C. Since the pot used by Paratpar Guru (Dr.) Athavale for
collecting His vomit is sattvik, positive vibrations are emitted by it to a greater extent

In its aura, the silver white of high purity is seen to a larger extent. Similarly, parrot green of even a higher quality has started to appear, saffron (that indicates negativity) has reduced a lot and orange (that indicates emotional tension) has been eliminated. The reason for this is – due to sattvikta being emitted by Paratpar Guru (Dr.) Athavale, the pot used by Him has also become sattvik to a larger extent. As a result, a higher proportion of positive vibrations is being emitted by the pot.

Saints who are at the highest spiritual level (like Paratpar Guru [Dr.] Athavale) are the source of sattvikta and hence, objects and people who come in their contact also get affected positively. This is the deduction from the test.