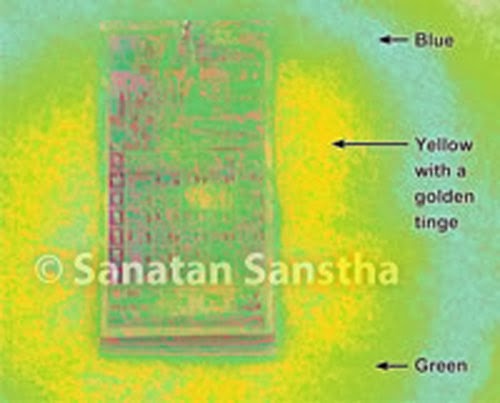 Sanatan’s Almanac has been published every year since 2006. The objective of this Almanac is not just to provide a ‘Panchang’ to the people, but to educate them on aspects of Dharma. Since it reaches thousands of households, this objective can be achieved.It contains some matter related to spiritual practice and protection of the Nation, with the objective that it brings about awakening among people about these aspects too.

The matter, pictures & designs in it are sattvik and are presented in a sattvik manner with the aim that it continuously emits sattvik vibrations in the house.

Since Saints understand the subtle dimension, they can accurately assess the vibrations in any object. The seekers take the word of Saints as the Absolute Truth and have faith in them.

However, rationalists need direct proof and not a ‘word of spiritual authority’. They take any aspect to be true only if it is proved scientifically with the help of some equipment or machine.

Tests were conducted through ‘RFI’ (Resonant Field Imaging) and ‘PIP’ (Polycontrast Interference Photography) technology on the Sanatan Almanac to scientifically verify the nature of vibrations emitting from them. Observations & interpretations are given ahead

Sanatan Almanac has been created so that it is sattvik. To verify if it is really sattvik or not, a test was conducted with the help of ‘PIP’ technology. The observations and explanation of the test are given ahead.

With the help of ‘RFI’ reading equipment, universal energy in the environment can be measured. With the help of ‘PIP’ technology, we can understand the momentum of vibrations around an object and can also see the colour aura around it.

By connecting computerised PIP equipment to a video camera, the circles of energy associated with the articles, buildings or individuals can be observed through filters in the PIP equipment.

This equipment separates the colours and has facilities to observe positive and negative colours as per their concentration.As per the ‘PIP’ technology, orange and violet represent vibrations of tension or distress respectively. Pink denotes Raja-predominance. Green signifies positive energy associated with spiritual remedies; blue denotes sattvikta or Anand (Bliss). Yellow with a golden tinge signifies high level of universal vibrations.

4. Observations and their interpretation

A. Sanatan Almanac’s aura mainly depicts yellow with a golden tinge. This means that the Sanatan Almanac is emitting a high level of universal vibrations.

B. The green aura shows that Sanatan Almanac emits positive energy too in a greater proportion. Again, in this aura, there are no vibrations of orange or violet, which depict ‘emotional tendency, inertia or distress’.

C. The blue aura next to the green aura depicts that Sanatan’s is Almanac sattvik.

D. Since positive energy is emitted by Sanatan Almanac, the environment around it, humans, animals and plants are charged with healthy and positive energy.’

5. Experiences about Sanatan Almanac
matching the observations of ‘PIP’ test

A. Creation of a pleasant environment in the house

The environment in our house used to be always tense. I bought Sanatan Almanac from a Sanatan seeker and hung it on a wall. Since then there has been a positive change in the behaviour of my family members, the environment in the house has also become pleasant.
– Mrs. Manisha Patil (Rashivade)

B. When Sanatan Almanac was hung on the wall of the kitchen, I experienced positive vibrations from the kitchen.
– Mrs. Shilpa Kudatarkar (America)

C. When I held Sanatan’s Almanac, my fingers felt positive vibrations : On 19.8.2007, a roll of papers was given to me for the purpose of an experiment. On holding it, my fingers experienced positive vibrations. When the roll was opened later, I came to know that it contained this Almanac.
– Ms. Sonal Joshi (Goa)

Sanatan’s seekers have been experiencing various inexplicable good and bad events in their spiritual journey over the past 12-15 years. Sanatan Sanstha has been conducting research on these events. The underlying spiritual reasons of the events can be enumerated by Saints; however, the help of scientists will be valuable to understand the scientific reasons. We will be grateful if scientists come forward and help in researching these events from the scientific perspective.
(Contact : H.H. Dr. Mukul Gadgil; E-mail : [email protected])

The above matter is not written to prevent scientific temperament under Article 51A of the Constitution. It has been written with the intention of using the constitutional rights to study Spirituality and to educate people to abide by Dharma in daily life.

Since religion and faith are personal matters, experiences narrated too are personal; they may not be applicable to everyone. It is not written to spread superstition or oppose medical treatment or scientific temperament. Readers should study it using their own discretion and judgement. – Editor

Who is truly progressive ?