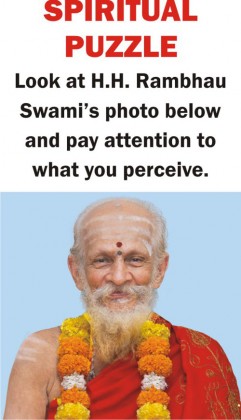 Information on medical tests conducted on H.H. Rambhau Swami, whose diet is minimal and He has not had water for the past 40 years. Here are a few unanswered questions.
H.H. Rambhau  Swami (78-years-old) from Thanjavur, Tamil Nadu has not had water since 1975. Since 1977, only two bananas and a glass of milk once a day are His diet. Yet He is completely alert and highly efficient. In 2000, when He was 63-years-old, Ranbaxy Labs and Cholan Labs conducted medical tests on Him.

At that time, looking at the results of the tests, researchers raised the following questions.
A. Despite a minimal diet, how is the proportion of cholesterol in H.H. Rambhau Swami high ? Does His body create cholesterol ?
B. After He spent 1 hour and 20 minutes in the Yadnya, His body temperature was more by 2 degrees than the temperature before He commenced Yadnya. What would be His body temperature while He is in contact with the fire of the Yadnya ?
C. How has He survived without water and with only a minimal diet for such a long period ?

Answer to the spiritual puzzle
on H.H. Rambhau Swami’s photograph

When a devotee looks at the Idol of a Deity in a temple, he would generally have spiritual experiences that the Idol is looking at him, irrespective of the direction from which he looks at the Idol. Some seekers have had similar spiritual experiences when they looked at the photograph of H.H. Rambhau Swami. These are given ahead. Seekers perceived that the photograph had come ‘alive’ due to the intense penance performed by H.H. Rambhau Swami.

Spiritual experiences
upon looking at the photograph of H.H. Rambhau Swami

1. A white aura was seen around His head; the aura appeared to be moving inside-outside.
2. A glowing silhouette appeared around His whole body.
3. While looking at His chest, it seemed that He is breathing and we could perceive His chest heaving.
4. When we looked at Him continuously for some time, we became thoughtless.
5. His photograph appeared ‘alive’; His eyes and eyelids appeared to be moving.
– Mrs. Mira Mane, Mrs. Arti Puranik and Mrs. Avani Alshi (Sanatan Ashram, Ramnathi, Goa)
6. While looking at His eyes, I felt closeness with Him and felt as if He may speak with me any moment.
7. I felt like looking at His photograph longer.
8. I felt as if He would come out of the photograph.
9. From His photograph, it was perceived as if radiance is emitting towards my face including the Adnya-chakra, and I felt more blissful.
– Mr. Giridhar Vaze (Sanatan Ashram, Ramnathi, Goa)
(These are the personal spiritual experiences of seekers. Others may or may not get similar experiences.) 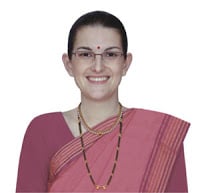 Below picture based on subtle-knowledge has been drawn by SSRF Saint, H.H. (Mrs.) Yoya Vallee. She is one of the few seekers who receives such knowledge because of her awakened sixth sense. Meaning of the word ‘Uchchhishta’

1. When the Guru accepts an entire meal, the residue as His Prasad (Holy sacrament) is called ‘Uchchhishta’. This is the best available. For a disciple, ‘Uchchhishta’ is very important.
2. While describing God, Vedas say, ‘Neti, Neti’ (It is not Him, It is not Him). In a similar manner, when the utterance of ‘Neti, Neti’ is over, whatever best remains is Parabrahman. ‘Uchchhishta’ means what remains after occupying everything, meaning, Parabrahman. Here, ‘Uchchhishta Ganapati’ means ‘Mahaganapati’ or ‘Ganapati in the form of Parabrahman’.
– H.H. Rambhau Swami (Providing His guidance at Sanatan Ashram)

Intellectuals who normally criticise Yadnyas, do not honestly admit the greatness of H.H. Rambhau Swami even after witnessing His special Yadnyas

Intellectuals who term Yadnyas as ‘made up’ raise questions over the siddhis acquired after performing sadhana (Spiritual practice) according to Hindu Dharma, call it a sleight of hand. However, when they do not take cognisance when a great Yogi enters fire due to His sadhana (even on witnessing it personally), it shows their ideological hollowness. Great Yogi H.H. Rambhau Swami enters a meditative state while offering oblations in the Yadnya, and lies down in the same state on a burning Yadnyakund for 10 minutes. While doing so, He wears just a shawl.
Information, videos and photographs about this Yadnya have also been made available by Him on www.fireyogi.com. H.H. Rambhau Swami has performed many Yadnyas of this type, which have been attended by many intellectuals. Even after answering all their doubts through actual actions, the intellectuals do not honestly admit His greatness in Spirituality. Similarly, news about Yadnyas is published in the passing instead of boldly or in an attractive manner.
This shows that the intellectuals, so-called progressive elements, criticise or dissect our great traditions, Karmakanda and worship etc., raise needless doubts and oppose Hindu Dharma just to defame it and not to satisfy their doubts as such. Such people lack the necessary intellectual /spiritual curiosity. If they had some curiosity, many of them would have taken cognisance of the great mission of H.H. Rambhau Swami.

Karmakanda
Spiritual practice of rites, rituals and observances performed at the physical level
Yadnyakund
Sacrificial fire place
Yadnya
Sacrificial fire
Vedas
The most sacred Hindu scriptures, revealed directly by God
Prasad
Offering made to God and then distributed to devotees
Dharma
Righteousness
Ashram
A place where a seeker can remain engrossed in spiritual practice through spiritual discipline
Arti
A ritual of waving a lit lamp in front of a Deity, accompanied by singing of hymns
Adnya-chakra
Sixth centre or the chakra in the spiritual energy system located in the mid-brow region in the subtle body