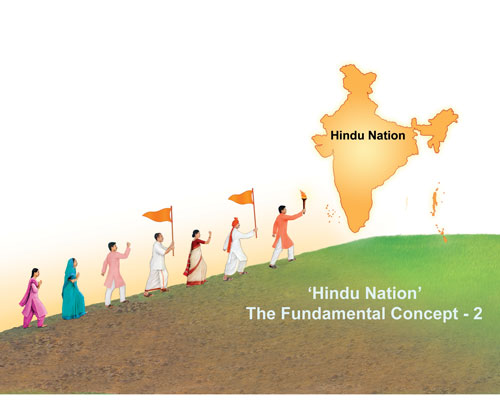 Many may feel that talking about the ‘Hindu Nation’ when practically nothing is happening in this direction at the physical level is an exaggeration; however, Saints who know the future have already sensed the bright future. Many people are curious to learn more about the ‘Hindu Nation’. Detailed information on this topic will be made available to the readers in this column every fortnight.

1. Demand for the ‘Hindu Nation’ is the constitutional right of Hindus !

A. The word ‘secular’ was not in the original draft of the Constitution of India. In 1976, Prime Minister Indira Gandhi made the 42nd Amendment to the Constitution and included the words ‘Secular’ and ‘Socialist’.

B. A 100 amendments to the Constitution of India have been made till 1.8.2015. If Bharat can be made ‘Secular’ Nation through an amendment, why can Bharat not become a ‘Hindu Nation’ through another amendment ?

C. The Constitution gives Hindus the right to opinion and expression. Hence, expressing the concept of the ‘Hindu Nation’ is the fundamental right of Hindus.

E. The first provision of Article 368 of the Constitution says – ‘Not withstanding anything in this Constitution, the Parliament may in exercise of its constituent power to amend by way of addition, variation or repeal any provision of this Constitution in accordance with the procedure laid down in this Article’. Thus, demand for a ‘Hindu Nation’ is the constitutional right of Hindus.

2. Ask the opponents of the ‘Hindu Nation’ the following.

B. During his tour of Bharat in 1999, Pope John Paul (II) had said, “We have to evangelize the whole of Bharat”. Why has anyone not called this unconstitutional ?

C. If United Kingdom, a highly advanced and democratic country, is a ‘Christian Nation’, why can Bharat (with 80% Hindu popula-tion) not be a ‘Hindu Nation’ ?

D. The Constitutions of Pakistan and Bangladesh mention an ‘Islamic Republic’; why can Bharat not be a ‘Hindu Republic’ ? When Hindus can reside in Islamic countries, Muslims and Christians can reside well in a ‘Hindu Nation’ !

E. During Independence, Muslims demanded that Pakistan be an Islamic State based on their own sect. Accordingly, the remaining part of Bharat that belonged to Hindus should have been called a ‘Hindu Nation’. How can the natural demand for a ‘Hindu Nation’ by Hindus be a crime ?

F. Tomorrow, if ISIS terrorists invade Bharat and declare it an Islamic State, where will the Hindus go ? There is not a single ‘Hindu Nation’ in the world !

Ask those who oppose establishing of the ‘Hindu Nation’ – Do you want the demoniacal IS which slits the throats of innocents, rapes women, considers women to be commodities, or a ‘Hindu Nation’ of Hindus who consider ‘The entire earth is one family’ and pray ‘May everyone in this world be happy and healthy’ ?

3. ‘Good days’ will be seen only after the ‘Hindu Nation’ is established !

Prime Minister Modi has said that ‘good days’ will come. This is an assurance to the citizens at the psychological level. Those who work at the spiritual level are aware that the ‘Hindu Nation’ is going to be established in Bharat in 2023. Hence, they do not get excited by momentary political changes. Besides, their activity at the spiritual level goes on incessantly.

Many Saints and astrologers have said – ‘We are going to see severe adverse times in the near future. World War 3 is going to cause massive destruction’.

Bharatiyas today have more faith in the westerners and hence, predictions of some foreign astrologers are given here.

A. Nostradamus : World War 3 is going to last 27 years. In this period, many cities of the world will be destroyed and crores of people will die. ‘King of Terror’ will lose the battle. After World War 3, there will be peace for the next 1000 years.

B. Edgar Cayce : World War 3 will be fought in the vicinity of Egypt and Libya.

Everyday we read news on terrorism, not only in Bharat but across the whole world. We have to consider these incidents as a warning of the impending World War 3, and prepare ourselves at the physical, psychological, intellectual and spiritual levels. The real ‘good days’ will come after the ‘Hindu Nation’ is established; because, it will have the foundation of spiritual practice !