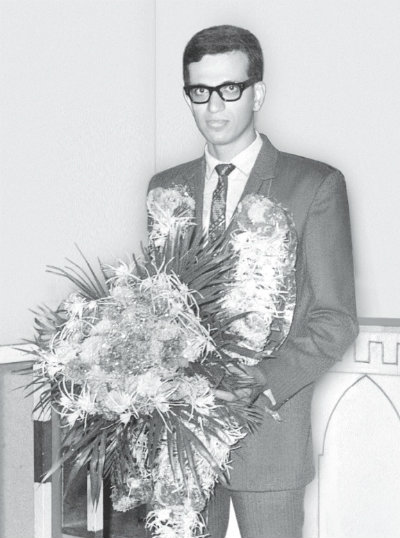 After conducting successful research on Hypnotherapy in England from 1971-1978, He became an internationally renowned Hypnotherapist. Returning to Mumbai in 1978, He started His independent practice as a Hypnotherapist on mental disorders.

In 1982, He formed the ‘Indian Society for Clinical Hypnosis and Research’. From 1978-1983, He gave practical guidance to over 500 doctors on the principles and practical applications of Science of Hypnosis and Hypnotherapy.

1 A. Innovative research in Hypnotherapy

Paratpar Guru (Dr.) Athavale conducted innovative research on ‘Awareness of undesirable physical behaviour and control over it’, ‘Establishing a desired response in place of an improper response’, ‘Mentally rehearsing a scene’ etc. He established that the disease related to blood cells – Eosinophilia – can be caused by mental stress.

1 B. Wealth of texts on Hypnosis and Hypnotherapy

2. Efforts for learning spiritual science and being blessed with a Guru 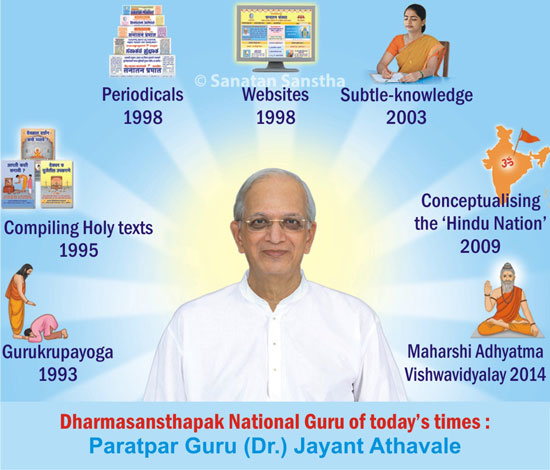 When Paratpar Guru (Dr.) Athavale realised that psychiatric patients who cannot be cured through Hypnotherapy get cured with spiritual practice as advised by Saints, He studied Spirituality from 1983 to 1987 by visiting nearly 30 Saints, who were authorities on Spirituality.

When He realised the supremacy of spiritual science, He started performing spiritual practice Himself. In 1987, He was blessed with a Guru in the form of the great Saint – His Holiness Bhaktaraj Maharaj of Indore.

After Paratpar Guru (Dr.) Athavale personally experienced that spiritual science bestows the highest Anand (Bliss) in life and is a science superior to medical science, with the blessings of His Holiness Bhaktaraj Maharaj, He established ‘Sanatan Bharatiya Sanskruti Sanstha’ on 1.8.1991. To devote full-time to spread Spirituality, He stopped His own medical practice.

3 A. Mission of spreading Spirituality carried out by Paratpar Guru (Dr.) Athavale

From 1987 to 1995, Paratpar Guru (Dr.) Athavale conducted classes for the study of Spirituality in the States of Maharashtra, Goa and Karnataka, compiling Holy texts that impart training in Spirituality and assisting spiritually curious people and seekers in their personal spiritual progress by dispelling their doubts.

To make the opportunity available to seekers, performing spiritual practice under the guidance of ‘Sanatan Bharatiya Sanskruti Sanstha’, for performing seva (Service unto Absolute Truth) of the Guru, Paratpar Guru (Dr.) Athavale organised Gurupournima celebrations of His Holiness Bhaktaraj Maharaj in Mumbai (1992), Goa (1993) and Kudal (District  Sindhudurg – 1995). In 1995, Amrutmahotsav (Celebration on completion of 75 years) function of His Holiness Bhaktaraj Maharaj was organised in Indore.

From 1996 to 1998,  Paratpar Guru (Dr.) Athavale addressed hundreds of public meetings in Maharashtra, Goa and Karnataka on ‘Sadhana and Kshatradharma’.

3 B. Spread of Spirituality through ‘Sanatan Sanstha’

When the scope of the mission to spread Spirituality expanded, Paratpar Guru (Dr.) Athavale established ‘Sanatan Sanstha’ on 23rd March 1999. Since thousands of seekers were prepared to carry out the mission of spreading Spirituality under the guidance of Paratpar Guru (Dr.) Athavale, this mission of Sanatan is continuing till date through weekly satsangs (Company of the God Principle), discourses, Dharmasatsangs (Spiritual discourses to impart scientific education on various subjects such as Dharma, spiritual science, spiritual practice, religious rituals etc.) on TV channels, Balsanskarvargs (Moral education classes for children), Gurupournima celebrations etc.

Sanatan Sanstha spread Spirituality on a large scale during the Kumbha Melas at Prayag (2001 & 2013), Nashik (2003 & 2015), Ujjain (2004 & 2016) and Haridwar (2010). Due to the ever expanding spread of Spirituality by Sanatan Sanstha everywhere, Spokespersons of Sanatan are being constantly invited to give their responses from the spiritual perspective on various social, national and religious problems faced by the Nation.

Website of Sanatan Sanstha (‘Sanatan.org’) gives guidance on sadhana (Spiritual practice) and dispels doubts; it also imparts Dharmashikshan (Education on Dharma) on the basis of knowledge in Sanatan’s Holy texts.

4. Activities carried out from the perspective of spiritual progress of seekers

4 A. Father of ‘Gurukrupayoga’, a Path of Yoga for faster God-realisation

To enable spiritually curious people to progress towards God-realisation faster, Paratpar Guru (Dr.) Athavale promoted ‘Gurukrupayoga’ (Path of Guru’s grace, which has 8 steps), a confluence of Karma (Action which gives rise to destiny), Bhakti (Devotion) and Dnyan (Knowledge) Paths of Yoga. Since sadhana in ‘Gurukrupayoga’ is taught as per the principle – ‘There are as many temperaments as there are people and corresponding number of Paths of spiritual practice’, a seeker can progress faster spiritually. Till May 2016, 65 seekers have attained Sainthood by performing sadhana according to ‘Gurukrupayoga’; and 836 seekers have attained a spiritual level above 60% and are on their way to attaining Sainthood. The spiritually curious people from foreign countries too are following this Path of sadhana and emancipating their lives.

(More on this aspect is given in Sanatan’s Holy text – ‘Spiritual practice according to Gurukrupayoga’.)

4 B. Developing a method to give a review of vyashti and samashti sadhana

To pay personal attention to the spiritual progress of seekers, Paratpar Guru (Dr.) Athavale has developed a method to give a review of vyashti (Individual spiritual practice that benefits only the seeker performing it) and samashti sadhana (Spiritual practice for the spread of Spirituality). The seekers can become pure by freely presenting their mistakes and personality defects by giving reviews of their vyashti sadhana; whereas, they comprehend their shortcomings in attaining proximity with society by giving review of their samashti sadhana. Lady-seekers who have gopibhav (Spiritual emotion akin to that of gopis who were supreme devotees of Shrikrushna)[Note – 2] developed samashti bhav and they are now shouldering the responsibility of spreading Spirituality in many States.

[Note – 2 : Gopibhav means – ‘Perceiving Shrikrushna is everything in life and being constantly in His communion’. More on this aspect is given in Sanatan’s series of Holy texts on gopibhav.]

To make a conducive atmosphere available to seekers for full-time sadhana, Paratpar Guru (Dr.) Athavale has built Ashrams like the Gurukuls (A school system prevalent in ancient Bharat, where teaching on all areas of life, including spiritual practice was done by the Gurus or Sages). He is the inspiration behind Ashrams at Ramnathi (Goa), Devad (Mumbai), Miraj (Sangli) etc., where, nearly 800 seekers are performing full-time sadhana.

4 D. Spiritual progress attained by seekers due to His guidance

A. Able to perform subtle-analysis of the process taking place in the subtle dimension in respect of anything, event or time

B. Receiving knowledge on a subject not available anywhere on the earth through the subtle (in the form of sight or thought)

C. Able to read spiritual levels of other individuals

E. Able to identify effects and manifestations of positive and negative energies

F. Able to suggest spiritual remedies on the manifestation of negative energies

(Note – Subtle-analysis : Information received about any event without using the five sense organs, mind and intellect.) 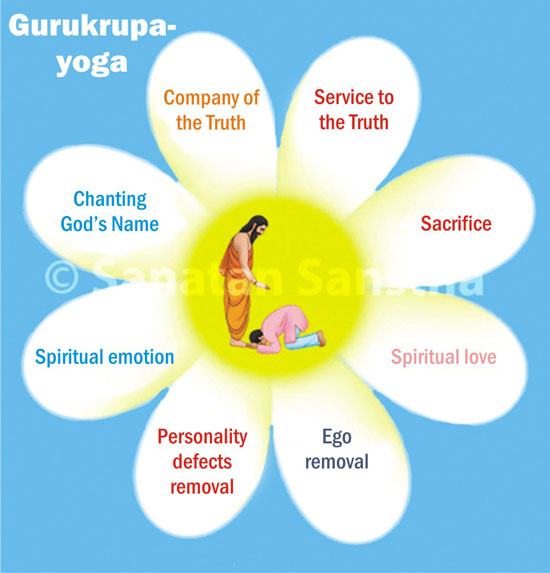 As per the principle – ‘Wherever the Divine Principle exists, some experience is perceived there’, the spiritual features of Paratpar Guru (Dr.) Athavale bestow spiritual experiences of His divinity. Not only seekers who perform sadhana under His guidance, but people from other sects, devout Hindus and Saints performing sadhana through different Paths too have spiritual experiences about Him.

6. Mission in progress through the Dnyanshakti

7. Publishing Holy texts Compilation of a wealth of Holy texts that touch every aspect of life

He has compiled a wealth of Holy texts on various subjects such as Spiritual science, Worship of Deities, Sadhana, Code of righteous conduct, Balsanskars (Subconscious impressions on  children), Protection of the Nation, Awakening on Dharma, Art for God-realisation, Spiritual remedies, Remedies in emergencies, Hypnotherapy etc. 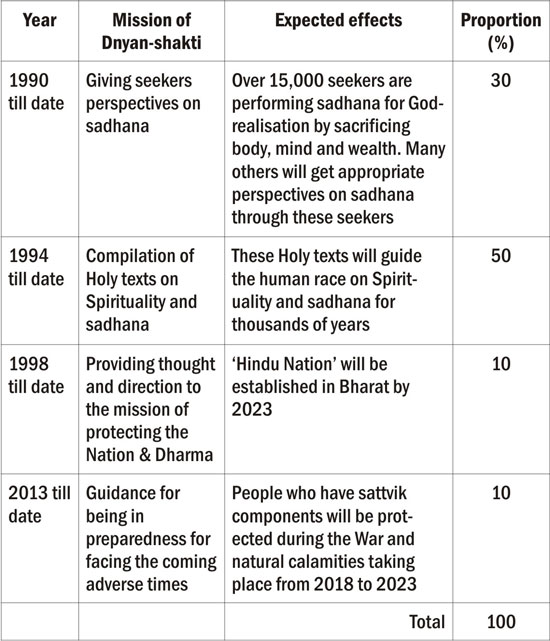 Balsanskarvargs
Moral education classes for children
seva
Service unto the Absolute Truth, that is, God Principle
Samashti sadhana
Spiritual practice for the spread of Spirituality
Kriya-shakti
Energy of Action
Karma
An act that becomes destiny, meaning, leads to a give and take account that has to be settled
Gurukrupayoga
Path of Guru's grace, which incorporates eight steps
Dharma
Righteousness
Anand
Bliss