Hindu Dharma has taught us how to perform various achars associated with cooking in an appropriate manner. Let us understand through this article, the importance of Bharatiya cow and ghee prepared from the butter obtained by churning old curd made from cream of milk. Also let us find out harmful effects of consuming processed butter and cheese.

1. Why is cow considered holy in Hindu Dharma?

Hindu Dharma considers cow to be a very Holy animal because ghee made from cow’s milk is very sattvik (Sattva-predominant).

A. Importance of cow’s milk and its function

Cow’s milk acts as a medium for attracting the sagun (Materialised) source of Deities from the universe. The manifest functional energy of Deities can act through the medium of milk.

B. When milk gets converted into curd,
its Raja component increases

When milk gets converted into curd, the Raja component in it increases. As a result, its function on the basis of kriya-shakti (Energy of action) in the form of sanskars increases.

Milk is considered as creation of sagun, while curd are considered to be an active component that takes creation towards production on the strength of the Raja component.

D. When curd gets converted into buttermilk
Tej-tattva (Absolute Fire Principle) congregates in it

When curd gets converted into buttermilk, fluidity of the Raja component increases due to which a small percentage of Tej congregates in it. Therefore, buttermilk is considered to be the functional flow of production. 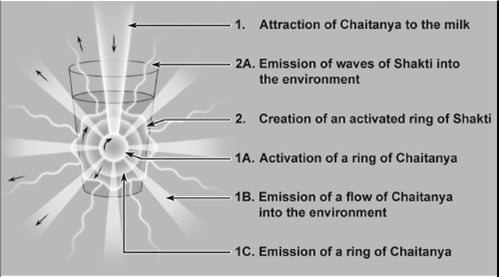 1. Cow’s milk is sattvik and rich in Chaitanya

God Himself has created the cow for the welfare of mankind. Hindus even worship the cow as a Deity. Cow is a sattvik creature and hence, her milk is sattvik and rich in Chaitanya.

2. Drinking cow’s milk leads to purification at the physical and spiritual level

Those who drink cow’s milk become sattvik in nature. They also experience relief from stress and experience calmness. The vibrations of Shakti in milk destroy the Raja-Tama components in the body, mind and intellect of individuals who drink it, thus purifying them at the physical and spiritual level.

Raja-Tama vibrations from the environment get attracted to the cow’s milk and hence, there is some amount of Raja-Tama in the milk that is not boiled.

Tejtattva activated during the boiling of milk destroys the Raja-Tama in it.

If milk is boiled by a seeker, more sattvikta (Purity) is generated in it.

2. Characteristics of ghee made
from the milk of different types of cows

A. Since the basic nature of different cows varies, the vibrations in the ghee prepared from their milk also vary.

B. Ghee made from the milk of a Bharatiya breed cow is most sattvik. Its consumption does not harm the body.

3. Subtle-characteristics of sattvik
ghee prepared from the butter obtained
by churning old curd made from cream of milk

A. Ghee prepared from the butter obtained by churning of old curd is sattvik and hence, it is used in puja and religious rituals.

B. The seva of melting butter by heating if performed with bhav (Spiritual emotion), this ghee attracts nirgun Chaitanya.

C. Ghee is good for health. It purifies an individual at the materialistic as well as spiritual levels. It is also useful as medicine for various ailments at both these levels.

D. Intake of ghee destroys distressing energy in certain parts of the body.

F. It is because of the purity of ghee, that its consumption gives the spiritual experience of Shanti (Peace).

Though from the trigun point of view, curd and homemade butter appear similar, their intrinsic properties of functioning at the level of Panchatattvas are different. Curd function at the level of Creation, while butter leads from Creation to Dissolution.

5. Why items made from
processed milk should not be eaten?

Milk is considered to be the source of sagun-Chaitanya and hence, is a complete food. That ingredient which functions through the medium of Sattva component for the welfare of others is called sattvik. Since milk is sattvik, intentionally turning the milk sour amounts to accumulation of the Raja-Tama-predominant foreign ingredients and destruction of the ingredient that functions through the medium of sattvikta. Such food items without the Sattva component prepared by turning the milk sour are harmful for the body. Eating these congregates distressing vibrations in the body, and it becomes an invitation to many diseases. Therefore, items that are harmful to life should be avoided; else, one has to face distress due to negative energies working subtly through the medium of these contaminated waves on a large scale.

A. Processed butter available in market is made in a manner that people enjoy its taste. Therefore, illusory vibrations are generated in it and as a result, people not only get attracted towards the processed butter but also develop a liking for it.

B. Such butter lacks in sattvikta and hence, Divine Shakti and Chaitanya do not get attracted to it.

C. Proportion of positive or negative vibrations in the processed butter depends on the milk used in its preparation, proportion of chemicals and the country in which it is manufactured.

7. Subtle-characteristics of
various types of cheese in the market

There is just one method of preparing cheese; however, processes of solidification and preservation are different. All these processes and their subtle-effect on cheese are given ahead. All numbers in the table given ahead denote percentages.

A. Cheese is made from the milk of goat or jersey cow. Distressing energy is present to a greater extent in cheese made from goat’s milk than that made from jersey cow’s milk.

B. In Bharat, consumption of processed cheese is more.

C. Fresh cheese perishes in 3 to 7 days; hence, it has to be consumed quickly.

8. Subtle-effects of processed butter, ghee
made by common man and ghee made by seekers

A. In Bharat, a ghee lamp is lit during puja and religious ceremonies. A ghee lamp emits positive vibrations.

B. Ghee is used in some Ayurveda treatments as well.