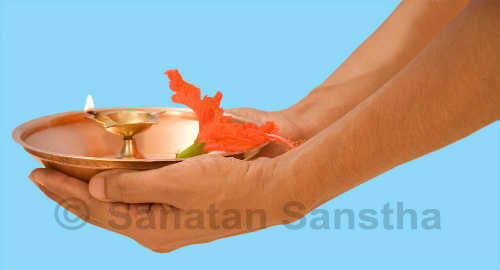 The various acts to be performed during Arti are given in this article. The science in most of these acts is explained in various other articles.

1. A conch should be blown
thrice prior to commencement of Arti 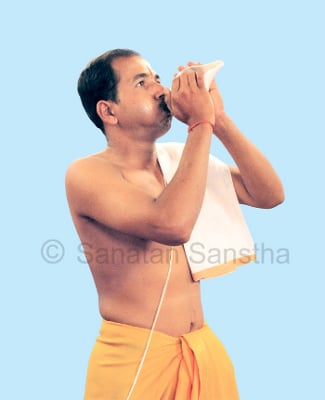 Position for blowing a conch

A. To begin blowing the conch, raise the neck and attain concentration of mind.

B. While blowing the conch, close the eyes and keep bhav that ‘one is receiving the marak (Destroyer) waves of the nirgun (Non-materialised) form of God coming from the upward direction.

C. As far as possible, take a deep breath to fill the lungs completely and then blow the conch in a single breath.

D. Begin blowing the conch on a low pitch, increase it gradually and stop at a high pitch.

2. After blowing the conch, commence singing the Arti

A. The Arti should be sung with the bhav that ‘God himself is standing in front of me and I am beckoning Him earnestly.

B. The Arti should be sung by understanding its meaning.

C. Pronunciation of words of Arti should be correct according to Science of Spirituality

2.1 The Arti should be sung accompanied by clapping

A seeker in the primary stage : Clap softly to maintain the rhythm.

A seeker in the advanced stage : Instead of clapping, try to become introverted.

2.2 When singing the Arti in addition
to clapping, musical instruments should be played

A. The ritualistic bell should be rung melodiously maintaining consistency in its rhythm

B. Rhythmic accompaniment of musical instruments like the cymbals, harmonium and drums, etc. should also be included.

2.3 A lit lamp should be moved in a circular
manner, in front of the Deity when singing the Arti

A. The platter containing the lit lamp should be moved in a complete circle in a clockwise direction in front of the Deity.

B. When moving the platter containing the lit lamp, it should not to be moved above the head of the Deity. However it should be moved from the Anahat-chakra (The fourth centre in the spiritual energy flow system, located in the region of the heart in the subtle-body) to the Adnya-chakra (Sixth centre or chakra in the spiritual energy system, located in the mid-brow region in the subtle-body).

After the Arti, the Camphor-Arti should be performed accompanied by reciting the mantra ‘कर्पूरगौरं करुणावतारं’;

After singing the Arti, the Deities should be hailed.

After the Camphor-Arti is performed it is to be imbibed by holding both the palms on the flame of the lit lamp and then moving the right palm from the crown of the head towards the neck. (In case the Camphor-Arti is not performed, then imbibe the Arti of ghee lamp in a similar way.)

After the prayer, a series of mantras should be recited.

After the recitation of the mantras, flowers and akshata (Unbroken rice grains, usually smeared with kumkum and used in ritualistic worship) should be offered at the Holy feet of the Deity.

Perform 3 pradakshina (Circumbulations) around the Deity. If this is not possible, stand in one place and move around yourself.

After the pradakshina, pay obeisance to the Deity with the bhav of surrender and pray mentally.

Thereafter, the Tirth (Sacred liquid) is partaken and the vibhuti (Holy ash) should be applied in the midbrow region.

Vibhuti
Holy ash
Tirth
Sacred liquid
Arti
A ritual of waving a lit lamp in front of a Deity, accompanied by singing of hymns
Akshata
Unbroken rice grains smeared with vermilion used in ritualistic worship
Adnya-chakra
Sixth centre or the chakra in the spiritual energy system located in the mid-brow region in the subtle body
mantra
A syllable or words representing spiritual reality or an aspect of God uttered to protect oneself or to achieve a specific goal