Most of visit the Devalay to receive blessings of the Deity. In order to derive maximum benefit from the darshan (viewing), one can follow simple guidelines as per the Hindu Dharma. After paying obeisance to the Deity, doing the pradakshina (Circumambulation) and taking the Prasad(Holy Sacrament), we must seek permission from the Deity to leave and only then turn around to go out of the Devalay. This action helps generate respect towards the Deity.

1. Do namaskar (Paying
obeisance) to the Deity once again

Before leaving the Devalay, do namaskar to the Deity once again. At that time, pray for continuous bestowal of the grace of the Deity and only after seeking permission to leave (meaning, informing the Deity), turn around to leave the Devalay. This is similar to informing the elders of the house before leaving the house. Take care not to turn abruptly, since that denotes disrespect to the divinity in the Deity.

2. While leaving the Devalay
after darshan, instead of turning
the back to the Deity at once, step back
seven steps and then turn your back to leave

In the act of stepping back seven steps without turning the back, the Idol of the Deity remains in front of the eyes. This makes it possible to remain immersed in the thoughts of the Deity. Remembrance of the Deity awakens a feeling of gratitude and the time taken in the action of stepping back precisely seven steps helps develop introversion; this in turn helps in accumulation of Chaitanya (Divine consciousness) of the Deity in the body. As a result, it becomes possible to avail the benefit of this Chaitanya for some time even after leaving the Devalay. Hence, this act of stepping back precisely seven steps has been advised to avail the benefit of Chaitanya of the Deity that accumulates in the body during the period with the help of the introversion developed through the concentration in the act. – A Scholar (Through the medium of Mrs. Anjali Gadgil, Phalgun Krushṇa Pratipada, KaliyugVarsh 5110 [11th March 2009], 3.43 p.m.)

A. Picture based on subtle-knowledge showing harmful
effects of turning the back to the Deity after having darshan 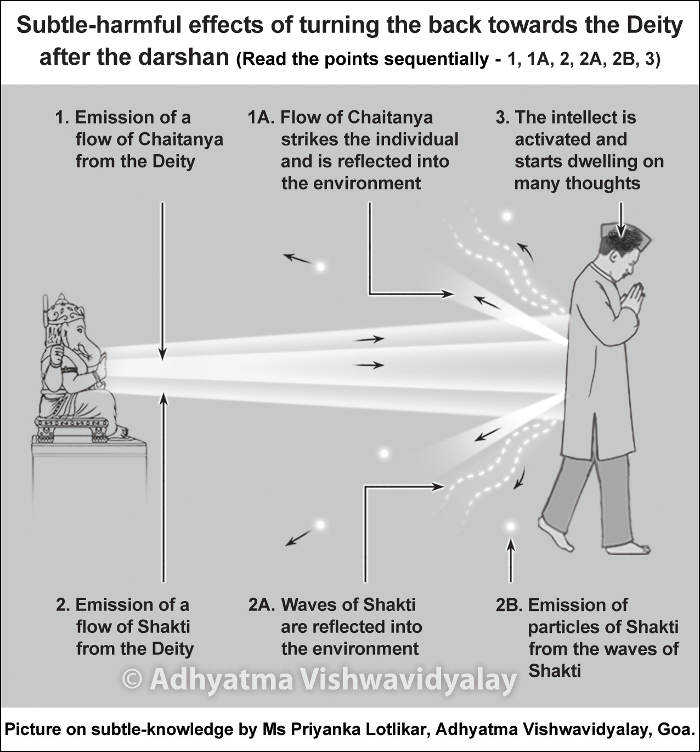 2. Vibrations emitting from the Deity : Divine Principle – 2%, Anand – 2%, Chaitanya – 2%, Shakti (Divine Energy) – 2%, but these vibrations are received by a person in less proportion if his is back towards the Deity.

A. ‘Through darshan of the Deity’s Idol in a temple, Sattva component is awakened in the person and he becomes introverted. However, after having darshan when he leaves the temple with his back towards the Deity, his introversion lessens and he begins to become extroverted. This can be called ‘Going towards Maya (The Great Illusion) from Brahman (God in His aspect as the Creator of the universe) ’.

B. By turning his back to the Deity’s Idol, the person is not in a state to absorb the vibrations emitting from the Deity. Other thoughts start coming to his mind; his bhav (Spiritual emotion) too is not awakened at that time. In any context bhav is important. After having darshan of the Deity since the person does not have bhav, he does not benefit completely from the vibrations emitting from the Deity. – Ms. Priyanka Lotlikar, Sanatan Sanstha (Nij Vaishakh Krushṇa 7, KaliyugVarsh 5112, 4th June 2010)

C. Spiritual experience – Standing with the back towards the Deity soon after the darshan resulting in reduction in bhav unto the Deity and not being able to avail the expected benefit of the Divine vibrations: Soon after the darshan of the Deity I stood with my back towards the Deity. At that time, I realised that, because of the images in front of the eyes, my bhav unto the Deity had reduced to some extent. Hence, I could not get the expected benefit of the Divine vibrations. – Ms. Priyanka Lotlikar, Sanatan Ashram, Ramnathi, Goa (Chaitra Shukla Chaturdashī, Kaliyug Varsh 5111 [8th April 2009])

3. Having darshan of the
kalash (Dome of a temple) again
while leaving the Devalay premises (It
symbolises the return of the individual from
nonduality to duality, to perform the tasks related to Maya) 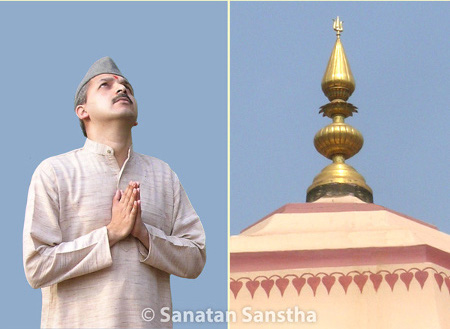 While leaving the Devalay, do namaskar to the kalash of the Devalay once again. Initial darshan of the kalash before entering the Devalay is symbolic of the journey of the individual from Maya to Brahman, that is, towards non-duality. Darshan of the kalash while returning from the Devalay, symbolises the journey of the individual from non-duality to duality, which means returning to carry out the tasks associated with Maya. In this manner, Hindu Dharma has taught us the concept of duality and non duality. This can be stated as ‘Supreme God is the one who shows the path of non-duality also brings us back to duality and compels us to perform all the duties associated with Maya. – A Scholar (Through the medium of Mrs. Anjali Gadgil, 30th September 2004, 9.37 p.m.)

Pratipada
First day in the bright fortnight of the moon
Prasad
Offering made to God and then distributed to devotees
Kaliyug
Era of strife (The present era, amongst the four eras)
Dharma
Righteousness
Ashram
A place where a seeker can remain engrossed in spiritual practice through spiritual discipline
Anand
Bliss
Sattva
One of the three components in the universe, signified by purity and knowledge