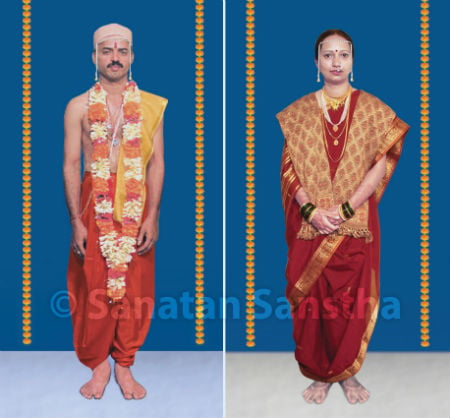 Nowadays, marriage is more of a celebration than a sanskar (Vedic rituals to create subconscious impressions)! Of late, an Event Manager plans the entire marriage as an event. It begins with theme of the decorations – the floral decorations, colour scheme to match with the ambience and the colour combination of the groom and bride dresses to go with the entire decor !

But marriage is much more than this! It includes rituals such as hom-havan (Sacrificial fire), recitation of Sanskrut mantras (Verses), blessings from elders etc. As a result, sattvik waves are attracted to the venue of a marriage. To get benefit from this sattvik waves, the bridal couple should consider the points mentioned ahead while selecting their marriage clothes.

A. Groom should wear clothing such as sovale [A rectangular piece of unstitched cloth, usually around 4-5 metres long, wrapped around the waist and the legs and knotted at the waist by Hindus] to be worn during ritualistic worship)-uparne (A shawl or a small single cloth worn loosely over the shoulders) or a kurta-pyjama made from natural fibres like cotton or silk instead of shirt-pant, coat-tie which are stitched from synthetic fibres. Cotton or silk has the ability to imbibe sattvik waves in greater proportion.

B. The groom’s clothes should not be of very bright ( tamasik ) colours. They should be of sattvik colours such as white, cream, blue, pink etc.

2. What type of sari should a bride wear ?

3. In religious rituals like marriage, why is an uparne or shawl draped around the shoulder ?

During marriage rituals, worship of Deities, Abhishek etc. the proportion of Shakti (Divine Energy) waves being received from God is greater which at times we are not able to bear.

These waves can cause distress as at times, we are not able to bear them and thus, it may cause heaviness of head, burning in the eyes etc. When men drape an uparne around their shoulder and women take a shawl, such waves do not cause any distress; on the contrary, we are able to absorb only the required amount of these waves from the venue of the marriage. Besides, a protective sheath is created around them, thus protecting them from the attacks of negative energies.