Search for “what is marriage” in an online dictionary ! What you will find is “the formal union of a man and a woman, typically as recognized by law, by which they become husband and wife.” That’s it ! However, there is a lot more that is offered by the marriage ceremony to the bride and the groom. Let’s look towards it through a spiritual perspective to explore how. 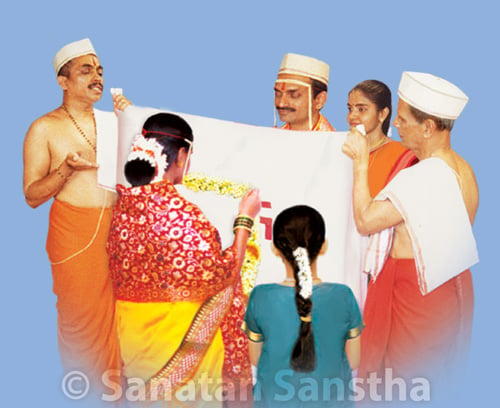 Hindu Dharma has advised sanskars (Vedic rituals to create subconscious impressions) to be performed during the sixteen principal events of life, so as to move closer to God. The most important of them being the ‘Vivah sanskar (Marriage sanskar)’ ! In this interesting article, we will learn about the meaning of vivah, importance of marriage sanskar, matching of horoscopes while arranging a marriage etc. 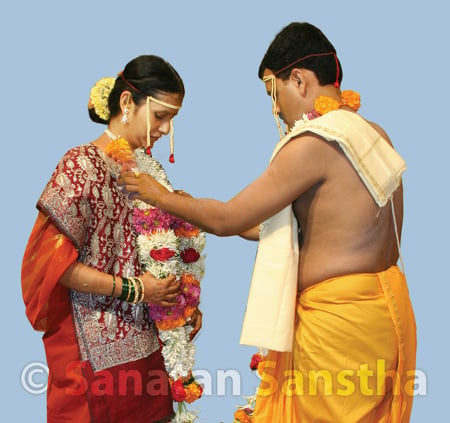 Taking the bride from her father’s home to one’s own home is termed as ‘vivah’ or ‘udvah’. Vivaha means Panigrahan, meaning the groom holding the hand of the bride to make her his wife. Since the man holds the hand of the woman, after marriage the woman should go and stay with the man. A man going and staying with the woman is inappropriate.

A. Hindu Dharma has prescribed four Purusharthas (Four basic pursuits of life), that is Dharma , Artha (Wealth), Kama (Desires) and Moksha . The purpose of the marriage sanskar is to fulfill the Purushartha of ‘Kama’ and then gradually advance towards ‘Moksha’.

B. Several important things in the life of a man and woman are associated with marriage; for example, love between man and woman, their relationship, progeny, various happy events in their lives, social status and prosperity.

C. Society respects a married woman, which assists in keeping the society in a healthy state

Sight of a woman with kumkum (Vermillion) on her forehead, wearing a mangalsutra (A typical ornament worn by a married Hindu woman; it is a symbol of marriage and worn by the woman until her husband’s death) around her neck, green bangles, toe rings and six or nine-yard sari (A traditional attire of Bharatiya women) automatically generates respect for her in the mind of an observer. Due to the relationships of wife, daughter-in-law, paternal aunt, sister-in-law etc. after marriage, a woman automatically gets a respectable position. Viewing a woman (other than the wife) as a mother and with respect keeps the society in a healthy state. Such a woman can be looked upto as an ideal by spinsters. – God (Through Ms. Madhura Bhosale, 18th November 2005, 3.30 p.m.)

3. What should be the age for marriage ?

In the earlier times, at the age of eight after the upanayan sanskar (Thread ceremony), a boy would remain in his Guru’s (Spiritual Master’s) hermitage for at least twelve years. Thereafter, before entering the stage of gruhasthashram (Householder), for four to five years he would make efforts to develop the ability to earn a livelihood. Giving due consideration to all this, the age group of twenty-five to thirty years was considered as ideal for a boy’s marriage. Once the girl crossed her childhood stage, for the next five to six years she was taught how to shoulder worldly responsibilities. Hence, the age group of twenty to twenty-five years was considered ideal for marriage for a girl. From the spiritual perspective in the current period too, the above mentioned age groups are ideal for marriage of boys and girls.

4. Matching of horoscopes while arranging a marriage 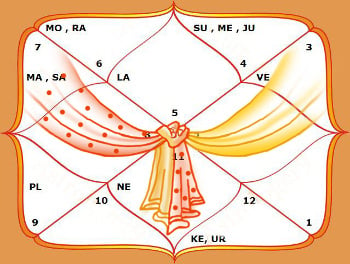 Even if all thirty-six points in the horoscope match (100% compatibility), the compatibility between husband and wife or between average individuals is only about 10% and not 100%. Besides, in the present Yug (Era) one should keep in mind that only 35% astrological predictions as per horoscope are accurate.

Women use their maiden surname even after marriage
to advocate women’s emancipation, but such emancipation is not
solicited as it is against the principle of Hindu Dharma of merging with others !

It is an ancient tradition followed as per Hindu Dharma that a woman takes her husband’s surname after marriage; but nowadays, some women claiming to be progressive thinkers, use two surnames, i.e. their maiden surname and that of their husband.

The fundamental principle of Hindu Dharma is sacrificing ‘I’ while merging with others. The purpose behind the ancient tradition of girl using her husband’s surname was that she should completely merge with the family of her husband. There are several instances of Saints changing names of their disciples. The concept behind changing disciple’s name is that he should leave behind everything like all ‘sanskars’ and ego attached with the name and merge with his Guru. The same principle was intended even in changing name of a woman after marriage and taking up name of her husband. In short, changing name of a woman after marriage is not because she should be tied with fetters but to make her progress spiritually. As such, by using her maiden surname, married woman is losing a spiritual opportunity to merge with others.

Advantages and disadvantages to parents due to love marriage of their children !

A. The parents do not need to look for a groom/bride.

B. In daughter’s marriage her parents do not have to give dowry to the daughter’s in-laws.

C. The couple cannot blame their parents if the daughter and her husband do not get along well together.