Marriage is one of the most important phase in a man’s/ woman’s life. Performing a registered marriage is becoming prevalent in the society today. Basically, a civil registrar ceremony, also known as a registered marriage is a non-religious legal marriage ceremony performed by a government official or functionary. In registered marriage, no rituals are performed as prescribed by the scriptures. But, the true objective of a marriage is that two individuals seek the blessings of God to lead a compatible and happy married life! For this, it is absolutely essential to perform the ritual of marriage as per Hindu Dharma. Let’s explore it through this article.

1. A marriage performed amidst
religious rituals is superior to a registered marriage

A. A ‘registered marriage’ is meaningless from the spiritual perspective

The concept of a ‘registered marriage’ came into existence in 1872 during the British rule. The main objective of the British was to use the tax received from these to increase Government revenue. This western practice is still being followed in Bharat simply out of a habit of aping the west or to save on marriage expenses. In this type of a marriage, no religious rituals are performed, no auspicious time for the marriage is fixed; instead, a document is generated that certifies the man and woman are husband and wife.

According to Hindu Dharma, the purpose of human life is God-realisation. As per Hindu scriptures, sanskars (Vedic rituals to create subconscious impressions) pertaining to Dharmawhich are performed during the sixteen principal events in the life of an individual (from conception of the foetus to marriage) draw man closer to God. Several, who have had a marriage according to Dharma, have had spiritual experiences in this context. Since no ritual whatsoever is performed in a registered marriage, the sanskar pertaining to Dharma does not take place on the bride and the groom. Hence, though registered marriage is legally accepted, spiritually it is not beneficial. Therefore, instead of selecting registered marriage as an alternative to avoiding expenses, performing marriage in a simple manner with all religious rituals is beneficial. 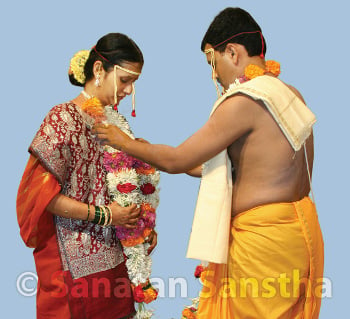 2. Importance of performing marriage as per the
religious rituals and its benefits as opposed to a registered marriage

A. Importance from a spiritual perspective

‘When marriage is performed according to scriptures, it has a number of rituals. Every ritual contributes towards enhancing the sattvikta in the gross (physical) and subtle bodies (mind, intellect and ego) of the bride and the groom. That is why, more than fulfillment of desires, it helps in their merging at the psychological level and if the spiritual level (Note 1) exceeds 70%, then merging at the spiritual level. In no other religion such rituals to enhance sattvikta, are performed. Hence, those marriages mostly help merge at the physical level. Hindu Dharma, on the other hand, has made a Raja-Tama (Bound by activity and ignorance) event like marriage sattvik, by combining it with Spirituality; thus, providing an opportunity to obtain the grace and blessings of Deities.

Note 1 : Every individual has trigunas [The three basic components of the human body] of Sattva, Raja and Tama. When an individual commences sadhana [Spiritual practice], meaning he makes efforts for God-realisation, the Raja-Tama components in him decrease and sattvikta increases. The spiritual level depends upon the proportion of sattvikta. Greater the proportion of sattvikta, higher is the spiritual level. The spiritual level of an average individual is 20%, while that of one who has attained Moksha [Final Liberation] is 100%. It is at this juncture that he becomes trigunatit [Goes beyond the three components]. – Compilers

Religious rituals performed while performing a marriage as per the scriptures and recitation of mantras enhance the sattvikta of the body of the bride and the groom. Distressing Raja-Tamavibrations in their bodies decrease, making their bodies radiant. I can recollect a recent example which stands testimony to this fact.

On Magh Krushna 5 (Fifth day of the dark fortnight of Hindu calendar month of Magh), KaliyugVarsh 5112 (22nd February 2011) Mr. Gautam Gadekar and Ms. Ranjana Gawas (Seekers of Sanatan Sanstha from India) got married. All religious rituals were performed. Given here are pictures of Mrs. Ranjana Gadekar, one taken a week before the marriage and the other a week after marriage. In the second picture, her face clearly appears radiant. 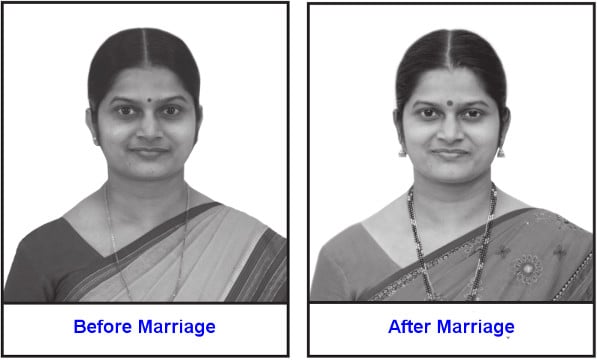 Today women use artificial beauty aids to beautify themselves. As per Hindu scriptures, after marriage a woman becomes more beautiful naturally. This is the real beauty ! To summarise, Hindu men and women aspiring to get married should do so as per Hindu scriptures, because only such a marriage will be beneficial to an individual at all the three planes – physical, psychological and spiritual.

1. A husband accepts a ‘dharmapatni’

Since Dharma permits accepting of a patni (Wife), after getting married as mentioned in the scriptures, the wife is referred to as ‘dharmapatni (Wife as per Dharma)’.

2. Greater awareness about responsibilities than rights

As a marriage takes place by performing sattviksanskar, the husband and wife become introverted. Hence, they look upon each other not only at the physical level, but also at the psychological level. They are concerned about each other and behave with understanding and love towards each other. In fact, they are more aware about their responsibilities than their rights.

3. A sattvik offspring is born

When a marriage is performed with a sattvik sanskar, the offspring is sattvik from birth itself.

4. Family health is maintained and the children are inspired to lead a life abiding by Dharma

An ideal lifestyle of the parents and celebration of various religious festivals and observance of vrats (Vowed religious observances) and family traditions, helps maintain the health of the family. The children too derive inspiration to lead a life abiding by Dharma. – God (Through Ms. Madhura Bhosale, 18th November 2005, 3.30 p.m.)