In order to imbibe the Chaitanya (Divine Conciousness) of the Deity, after completing the pradakshina (circumambulation) of the Deity in the Devalay (Temple) we all take Tirth and Prasad. If we were to follow the guidance given in our Shastras and partake the Prasad and the Tirth in a spiritually correct manner, then we will be able to derive maximum benefit from it. Given ahead is the science underlying partaking Tirthand Prasad while doing Namjap. 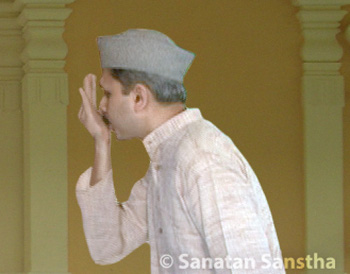 1A. When compared with Prasad, Tirth has greater capacity to imbibe sattvikta (purity) and hence, after partaking of Tirth, it is beneficial to smear it on the eyes, Brahmarandhra, head and the neck

An Unknown Energy : After taking Tirth with the right hand, the same hand is touched on the eyes, Brahmarandhra, head and the neck. This is not done after partaking Prasad. What is the reason behind this ?

A Scholar : The Prasad is associated with the Pruthvi-tattva (Absolute Earth Principle). It has lesser capacity to receive and transmit sattvikta when compared with Apa-tattva (Absolute Water Principle). Therefore, repeating the actions while accepting Tirth does not render much benefit and hence, such actions are avoided after receiving the Prasad. (Through the medium of Mr. Nishad Deshmukh, 5th June 2006) 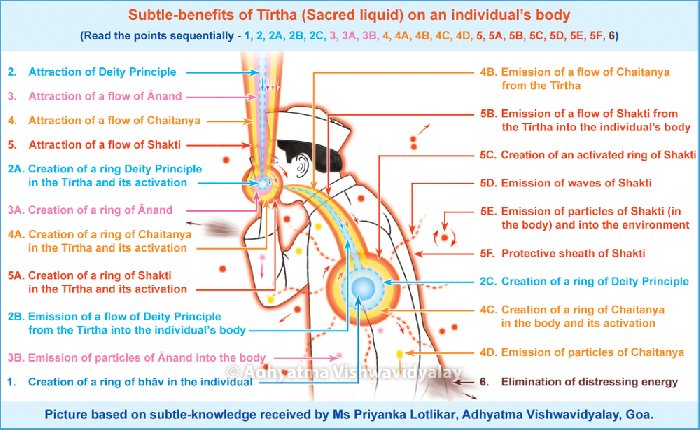 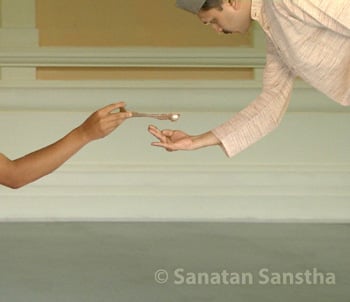 A. Tirth is associated with Apa-tattva. Hence, it has a higher proportion of Chaitanya and Shakti (Divine Energy) in it.

B. Upon partaking of Tirth, particles of Chaitanya spread in the blood. Consequently, the body is rejuvenated.

C. Tirth of the Deity has Shakti akin to the sattvikta of five Holy rivers (Ganga, Krushna, Godavari, Tungabhadra, Kaveri).

D1. The sagun-nirgun (materialised – non-materialised ) Principle of the Deity come into the Tirth.

D2. Upon partaking of such Tirth, internal purification of the body takes place.

4. By receiving the Tirth in the palm and partaking it, the Deity Principle is emitted and activated in the body. Likewise, it is emitted into the environment in a little proportion. – Ms. Priyanka Lotlikar, Sanatan Sanstha (Nij Vaishakh Krushna 11, Kaliyug Varsh 5112 [8.6.2010])

1B. Importance of touching the palm to the eyes,
forehead, Brahmarandhra, and the neck after taking Tirth

‘Take the Tirth on the palm of the right hand and sip it. When it enters the stomach through the mouth, Chaitanya is transmitted to all the body parts below the neck. When the same palm is touched to the external parts of the body, meaning the eyes, forehead (Adnya-chakra ), Brahmarandhra and the neck, Chaitanya in the Tirth affects the external parts too.’ – Ms. Priyanka Lotlikar, Sanatan Ashram (Chaitra Shukla Trayodashi, KaliyugVarsh 5111 [7th April 2009])

2A. Factors on which divinity of the Prasad depends

2B. Picture based on subtle-knowledge
showing effect of receiving Prasad with the left palm 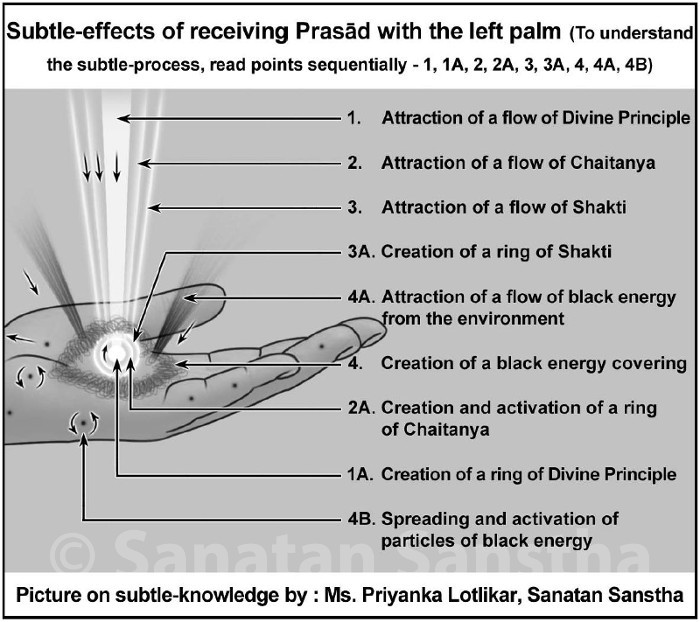 A. Distressing vibrations in picture based on subtle-knowledge : 2%’ – H.H. Dr. Athavale

B. Vibrations obtained by the person upon receiving Prasadwith the left palm

1. Food items immediately attract one of the trigunas (The three basic components of the human body – Sattva, Raja and Tama) which in turn affect the person; for example, if food is prepared by a Tama predominant person, then Tama-predominant vibrations and ego of that person enter the food, which are then imbibed by the person consuming the food, thus affecting the person’s body.

2. Tama-predominant activities are performed by the left hand.

3. Since the proportion of Sattva component is more in the right hand when compared with the left hand, there is a possibility of Raja-Tama components entering the Prasad.

4. When Prasadis received with the left palm, sattvik vibrations are not emitted through it.

5. In sometime, negative energies attack the Prasad received with the left palm. Due to this, the person consuming it does not benefit from it.

6. It is evident that a person receiving Prasad with his left palm has less bhav (Spiritual Emotion) towards God and the Prasad. Such a person does not get any benefit from the Prasad.

2C. Using the right hand while accepting the Prasad
amounts to activating the kriya-shakti (Energy of action) and
with its help receiving the Principles in the form of blessings of Deities

An Unknown Energy : What is the reason for accepting the Prasad only with the right hand ?

A Scholar : Prasad consists of Principles associated with the respective Deities. Accepting such a Principle form Prasad with the right hand amounts to activating the kriya-shakti and with its help, receiving the Principles in the form of blessings of the Deity. Accepting the Prasad with the right hand retains its sattvikta without any reduction; accepting it with the left hand results in a 10% reduction in the Deity’s Principle due to the lack of activation of kriya-shakti. (Through the medium of Mr. Nishad Deshmukh, 5th June 2006, 7.02 p.m.)

2D. Picture based on subtle-knowledge
showing benefits of receiving Prasad with the right palm 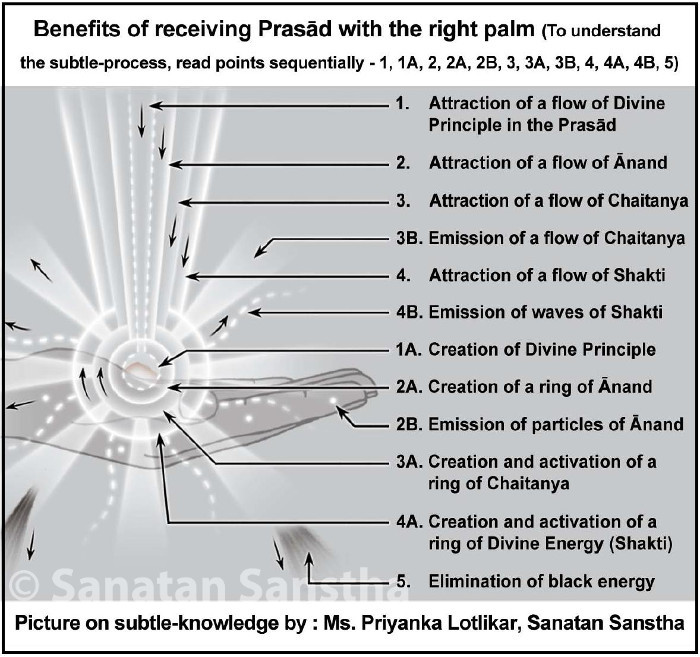 1. Positive vibrations in the picture based on subtle-knowledge : 4%’ – H.H. Dr. Athavale

2. ‘Vibrations obtained upon receiving prasad with the right palm

A. As a result of receiving the Prasad with the right palm, a person’s Surya-naḍi (see glossary) is activated and his bhav is awakened. -Ms. Priyanka Lotlikar, Sanatan Sanstha (Nij Vaishakh Krushna 4, KaliyugVarsh 5112, 1st June 2010)

2E. Humbly bowing while accepting
the Prasadincreases the sattvikta within the body 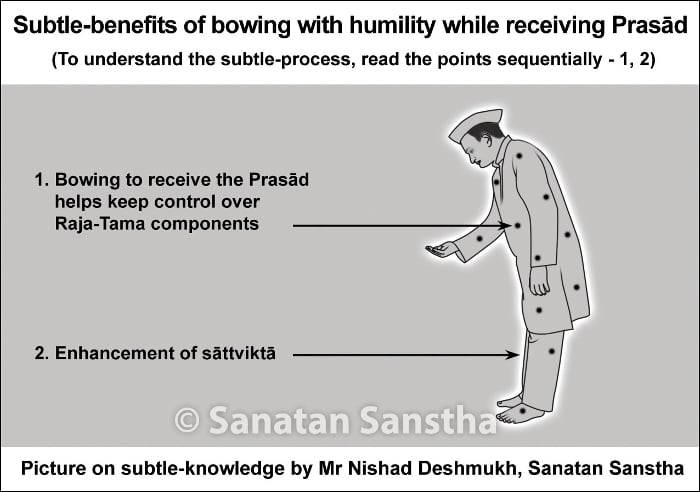 2F. Chanting while sitting in front of the Deity 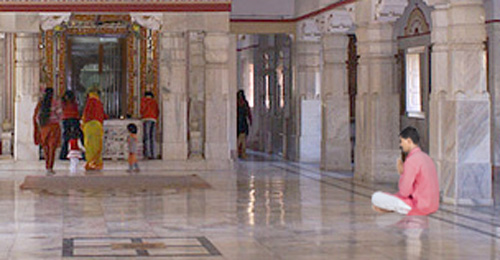 After completing pradakshina (circumambulation) and partaking Prasad, we should sit in front of the Deity and chant the Name of the Deity for atleast 15 minutes or minimum of 3 malas. This benefits the individual in the following manner.

1. Waves emitted by the Deity are activated and the individual benefits from them. Since the individual gets the Deity’s Chaitanya in the Devalay, it is able to obtain the grace of the Deity much faster.

2. Since the environment in a Devalay is sattvik, chanting in the Devalay gets performed in a better manner than at home. For this reason, Jains carry their Japamala to a Devalay and chant there.

An Unknown Energy : What is the science underlying partaking of the Prasad while being seated ?

A Scholar : ‘Sitting inside a Devalay denotes detaching the self from activity oriented karma (an act that gives rise to destiny) and performing karma associated with indirect activity. Raja-Tama components required for activity oriented karma in a individual are continuously in an awakened state. Prasad when partaken while standing, has the energy of the activity oriented karma. This can reduce the sattvikta and create a possibility of increase in Raja-Tama. On the other hand, in karma associated with indirect activity, Raja-Tama component in an individual is dominated by sattvikta and sattvikta is in an awakened state. Thus, while performing karma associated with indirect activity, loss of sattvikta is less.’ (Through the medium of Mr. Nishad Deshmukh, 6th June 2006, 1.01 p.m.)

‘In Kaliyug , since the predominance of Raja-Tama component is high, even a substance like Prasad charged with Divine radiance is not spared from the attacks of Raja-Tama. Since bhav of the individual in Kaliyugis not much, sattvikta in the Prasad does not last long. To benefit from the sattvikta in the Prasad, it should be partaken immediately.’ – A Scholar (Through the medium of Mr. Nishad Deshmukh, 6th June 2006, 1.04 p.m.)

2I. There is less likelihood of negative energy attacks
onthe Prasad because of the sattvikta of the Devalay

2J. If the intention is to carry the Prasad home,
then wrap it in a clean cloth to avoid attacks by negative energies

Carrying the Prasad home depends upon the bhav of the individual. It is always correct to carry Prasad for people who are not able to visit the Devalay. But then, it should be first wrapped in a clean cloth and then carried. This reduces the attacks of negative energies by 10%.’ – A Scholar (Through the medium of Mr. Nishad Deshmukh, 6th June 2006, 1.03 p.m.)