In order to derive maximum benefit of darshan (viewing of deity) in a Devalay, one should do it in a spiritually correct manner. We can follow the guidelines given to us based on our shastras. Upon entering the devalay, one must first pay obeisance to the kalash (dome) of the temple and then proceed towards the sabhamandap. The sabhamandap is a manifest form of the actual region oriented nirgun (Non-materialised)-sagun (Materialised) presence of the Deity; hence, entering the sabhamandap amounts to entering the territory of the Deity. – A Scholar (Through the medium of Mr. Nishad Deshmukh, 17th January 2007, 7.10 p.m.)

1. Simple steps to be followed while
proceeding towards and after entering the sabhamandap

A. Before entering the sabhamandap, do Namaskar
to the entrance door from a distance and then to the steps

1. Namaskar to the entrance door of sabhamandap from a distance

Namaskar to the entrance door of the sabhamandap from a distance amounts to Namaskar with the emotion of prayer to the guarding Divine waves moving freely in God’s Kingdom, praying to them for freeing the passage to God’s Kingdom and facilitating a smooth entry. The sabhamandap of a Devalay is the activity-centre of God’s planning.

2. While entering the sabhamandap, touching the steps and doing Namaskar

Touching the steps with one hand and doing Namaskar while entering a sabhamandap is actually Namaskar to the sanctity of the sabhamandap, which acts as samashti (Society) form of the Devalay. It is because of the radiance of the place that Chaitanya (Divine consciousness) accumulates in the land. Namaskar to the steps helps in increasing the sensitivity of imbibing Chaitanya through the medium of that Principle. Namaskar to the earth by way of touching it respectfully with the hand, results in quick spreading of the Chaitanya from the respective areas into the body of the individual. This, in turn, generates conduciveness for the gross body of the individual that is made up of Pruthvi-tattva (Absolute Earth Principle) and Apa-tattva (Absolute Water Principle), to move about freely. Due to the intense Shakti (Divine Energy) present in the Devalays of Superior Deities, the individual is not distressed. – A Scholar (Through the medium of Mr. Nishad Deshmukh, 17th January 2007, 7.10 p.m.)

3. Praying while stepping into the sabhamandap (It helps in reduction of a individual’s ego)

While stepping into the sabhamandap, offer the following prayer that is conducive for spiritual progress – ‘O Deity, let me benefit from the Chaitanya emitting from your Idol to the utmost extent.’ This prayer will help in reducing the ego. – A Scholar (Through the medium of Mrs. Anjali Gadgil, 17th November 2005)

2. Method of proceeding from the sabhamandap
towards the garbha-gruha (Sanctum sanctorum of a temple)

A. Reason for not entering from the right side of the sabhamandap; instead, the reason for exiting from this side 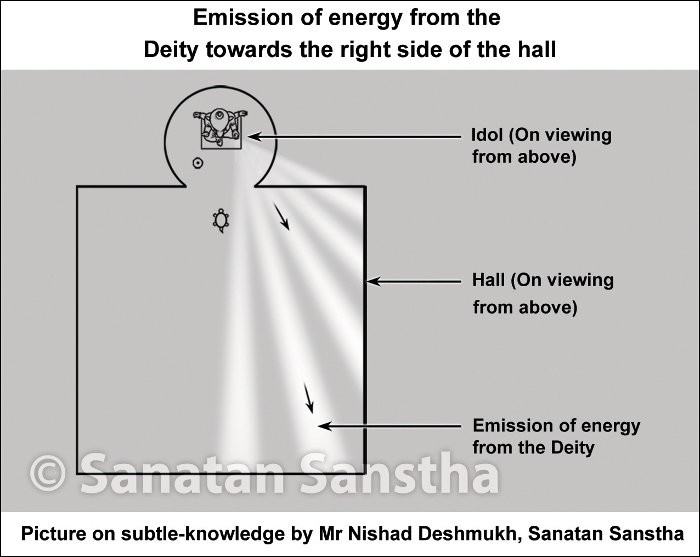 B. Reason for walking along the left side of the sabhamandap towards the garbha-gruha

The left side of the sabhamandap is the main activity-source, which on the strength of Chaitanya, works at the level of the universe by projecting the Chaitanya emitting from the right side of the Deity’s Idol. Therefore, entering a sabhamandap from the left side (wherein the right side of the individual remains to the right of the Idol) the individual gets the benefit of the waves transmitted, to be operational in the universe. This makes the body of the individual more conducive for receiving the Chaitanya, and its Muladhar-chakra (First centre in the spiritual energy system located in the region between the anus and the base of the genitals in the subtle body) and Swadishthan-chakra (second centre in the spiritual energy system located approximately 3 cms above the muladhar chakra) get purified.’ – A Scholar (Through the medium of Mr. Nishad Deshmukh, 23rd January 2007, 6.26 p.m.) 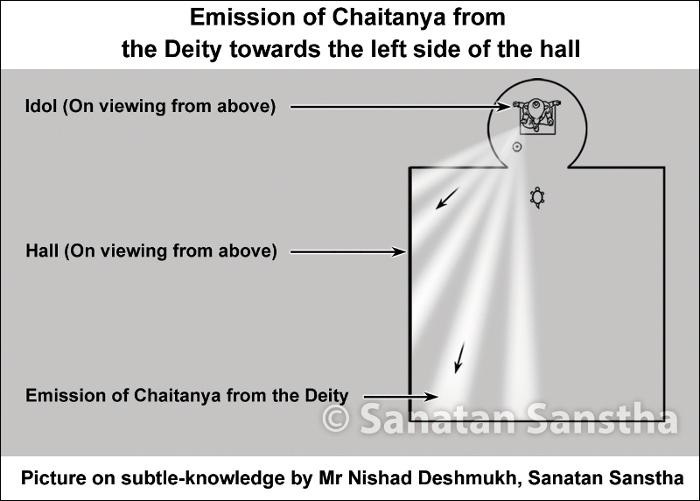