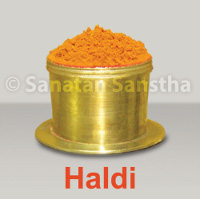 Haldi (Turmeric) being a tuber, the waves of Pruthvitattva (Absolute Earth Principle) in it are in far greater quantity than in stems growing above the surface of earth. Kumkum (Vermillion) is prepared from haldi. Since haldi and Kumkum are offered to Deities, the worshipper benefits from the waves of Pruthvitattva in them, as well as from the waves of Deities. Consequently, the Sattva component in the individual is enhanced and his ability to tolerate distressing waves also increases. (Through the medium of Mrs. Anjali Gadgil, 17th August 2004, 3.46 p.m.)

How to identify pure Kumkum (Vermillion) ? 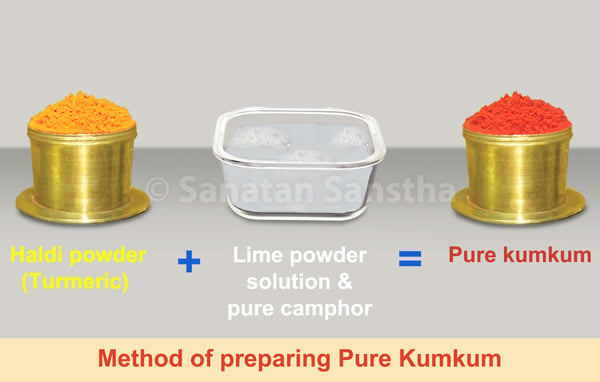 Constituents of Kumkum are pure haldi, diluted lime powder solution made in water and a small quantity of pure camphor. Though Kumkum is made from haldi, the odour of haldi is entirely eliminated from it and a Divine scent takes its place. The odour of haldi is evident only when it is sniffed. In contrast, the scent of pure Kumkum is evident till a certain distance. Pure haldi has indigenous humidity and yet is completely dry. Its touch is cold like that of ice. Pure Kumkum is blood red in colour. It has high iron content. By applying this Kumkum on the forehead, negative energies are prevented from entering the body through the mid-brow region. In the past eras (Satyayug, Tretayug and Dwaparyug) pure Kumkum was available. With the passing of the eras the Sattva component in the Kumkum has gradually waned. In the Kaliyug , a handful of people make pure Kumkum. 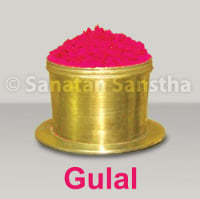 The Shakti (Divine Energy) Principle in the Universe is attractedto the fragrant particles in the subtle air generated by the gulal (A pink powder which attracts the Deity’s Principle, used in ritualistic worship). Also the dormant waves enriched with Chaitanya (Divine consciousness) in the environment become mobile because of the gulal. Thus the worshipper benefits from them.(Through the medium of Mrs. Anjali Gadgil, 27th April 2005, 8.47 p.m.)

When gandha (Sandalwood paste) is applied to the mid-brow region of the Deity in the picture or the Idol, due to the qualities of the substance from which it is made, its subtle scent and its specific colour, the Pingalanadi of the Deity is activated. Consequently, the Principle of the Deity isattracted to the photo or the Idol of the Deity in which they get activated.Amongst the different types of gandhas applied to Deities, ashta-gandha and sandalwood gandha are the most sattvik. (Through the medium of Ms. Madhura Bhosale,16th January 2005, 7.00 p.m.)

Holding the gandha with both hands is indicative of devotion with expectation stemming from dvait (duality). When done with both hands the posture activates the Sushumnanadi that is conducive for spiritual progress. That is why in spiritual practice following Karmakanda and the one with expectations, importance is given to making gandha with both hands. It is imperative that the ritual be complemented with Shiva and Shakti in order to take it to its desired completion. The left hand is a symbol of Shiva, while the right hand is a symbol of Shakti.As opposed to this, when making gandha for applying to a corpse,only the right hand should be used. This is because using the right hand to make the paste signifies the act of actually performing a deedwith the help of the Pingalanadi representative of the Energy of action. Making gandha for a corpse, is an act of performing the necessary deeds for the subtle body and giving it further momentum with the help of the Energy of action made functional through the right hand. It also means praying for the further momentum of the subtle body aided by the Energy of action of these action waves. Thisposture activates the Pingalanadi in the body of the individual preparing the gandha and as a result the Raja component waves emitted by the gandha enter the corpse. The sub-units of prana-shakti (Vital energy) dormant to some extent in the corpse are thereby activated and thrown out of it or their disintegration to some extent is facilitated.

Why is haldi and kumkum not added when making gandha ? 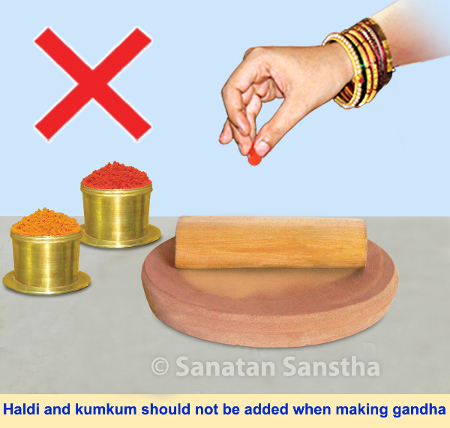 Reference : Sanatan’s Holy Text ‘What is the importance of the substances used in ritualistic worship’