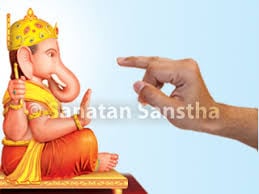 1. Why should gandha be applied before offering haldi and kumkum?

The proportion of Shaktitattva (Energy Principle) in haldi and kumkum is greater when compared with that in gandha (Sandalwood paste); hence, offering haldi and Kumkum together with gandha increases the inertia of the waves transmitted by the gandha. This results in reduction in the speed of emission of Chaitanya (Divine consciousness) in the atmosphere. Eventually, the jiva does not receive the expected benefit from the waves emitting from the gandha. Hence haldi-kumkum is offered separately and not together with gandha.

Both gandha and haldi-kumkum are important from worshiper’s perspective; but when offering to a Deity, these are offered separately and not together. In the beginning of pūja, after bathing the Deities, gandha is applied first and then haldi and kumkum are offered. This effectively means that with the help of the innate nirgun (Non-materialised) Chaitanya in gandha, Chaitanya is activated, and through the medium of haldi and kumkum, it is brought to the level of Pruthvitattva so that it is fit for the worshiper to imbibe.

2. Science underlying the worship of the Devi
(Goddess) with just one upachar of offering kumkum ?

The fundamental active Shaktitattva has been created from red light. Kumkum symbolises Shaktitattva and hence, pūja of the Goddess is performed with kumkum. Waves of Shaktitattva from the universe are attracted to the fragrant waves emitting from kumkum within a short period. Hence, to awaken the saguntattva (Materialised Principle) in the Idol of the Goddess, kumkum that is red in colour and also represents fragrant waves that please the Goddess Principle, the upachar of offering kumkum is given first priority. The fragrance of the fundamental seed of the Shaktitattva resembles that emitted by kumkum; hence, the potent medium of kumkum is used for invoking the Goddess.

3. Importance of the ring finger in the worship of a Deity

Due to the waves associated with the Apatattva (Absolute Water Principle) emitting from the ring finger, the sattvik waves emitting from the Deity begin to flow and gain momentum. The intensity of these flowing waves helps activate the jiva’s Atma-shakti (Energy of the soul), on the strength of which these waves dissipate into the praṇamaya-kosha (Vital energy sheath) and manomaya-kosha (Mental sheath) as per the need, and it helps in purifying the body and various sheaths of the jiva. The waves associated with the Pruthvitattva and Apatattva emitted by the Deity are attracted through the ring finger to the maximum extent; however, since the body of the jiva is also associated with the Pruthvitattva and Apatattva, the jiva does not experience any distress due to these waves.

4. Why are the ring finger and the thumb used in
offering haldi and kumkum and to remove the nirmalya?

The mudra (A posture used for directing the flow of spiritual energy into the Sushumnanaḍi) formed by joining the tips of the ring finger and the thumb awakens the Anahat-chakra in the body of jiva and helps awaken the kriya-shakti (Energy of action) in the jiva. The predominance of kriya-shakti in the body helps awaken the jiva’s bhav towards God and enhances the proportion of the Raja-Sattva particles in the praṇamaya-kosha (Vital energy sheath). The specific mudra formed when joining the tips of the ring finger and the thumb while removing nirmalya or while offering haldi-kumkum activates the waves of Apatattva in the universe, and Chaitanya of the Deity in nirmalya begins to flow. The Chaitanya in a dormant state in the Deity’s Holy feet gets activated through the medium of haldi and kumkum, and it helps in the emission of this Chaitanya towards the jiva.

The ring finger is associated with the nirguntattva, and hence, its touch reduces the possibility of formation of a covering by the negative energies around the substances placed for offering to the Deities and helps in maintaining the sanctity of the Deity’s Idol