Sounding of a conch at the commencement of a puja and before an Arti helps in reducing the obstacles caused by the negative vibrations in the flow of the sattvik (Sattva-predominant) waves of Deities attracted towards the ritual and creates a protective sheath of Chaitanya (Divine consciousness) around the implements of the puja. It provides the following benefits: 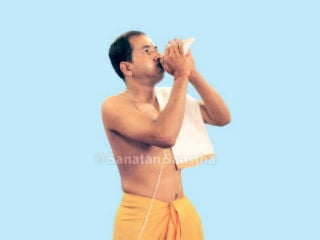 1. Sounding of a conch awakens the
tarak-marak (Saviour-Destroyer) Principle of the Deity

A. Sounding of a conch by tilting the neck back
slightly awakens the tarak-marak Principle of the Deity

Raising the neck a little and tilting it back slightly activates the sushumna-naḍi of the individual sounding the conch. This helps in striking an appropriate balance between the Raja-Sattva particles in the waves related to the Absolute Fire and Air Principles that are emitting from the mouth. As a result, the tarak-marak Principle of the relevant Deity is awakened, suiting a particular situation and depending on the requirement.

B. Sound of the conch causing
disintegration of Raja-Tama particles in the environment

Due to the Nad-shakti (Energy of sound) emanating from the sound of a conch, the subtlemost waves from the universe coming from the upward direction get awakened, leading to the disintegration of Raja-Tama particles in the environment in a shorter period.

C. Sound of a conch compels the negative energies to manifest

Due to the swift momentum of the waves (which are endowed with Nad-shakti) being emitted by the conch, friction takes place between the Raja particles, and that generates subtle-flames. As a result, the sheath around the bodies of the negative energies that exist in gaseous form, experiences heat. Hence, the negative energies cannot tolerate the sound of a conch. They are then compelled to manifest. Some mantriks from Bhuvalok (Nether region) and Patal (Hell region), however, pretend that they are unfazed by the sound of the conch.

D. Sounding of a conch in a high pitch till the end penetrates even the
black sheath around the bodies of the negative energies that are in gaseous form.

2. Features and benefits of the sound at the
sagun-nirgun level generated from the sounding of a conch

A. Impact of the conch sounded on the earth being felt on
other regions of the universe, resulting in activation of the subtlemost
waves present there and their reaching the venue where the conch has been sounded

The sound generated by a conch is a sound at the sagun-nirgun (Non-materialised) level. This sound creates a void of subtle-sound from the conch to the periphery of the environment. The subtlemost waves of God active in the form of different Deity Principles and waves of sound are attracted towards this void of the subtle-sound. Since the spread of this void extends up to the regions of Bhu (Earth), Bhuva (Nether), Swarg (Heaven) and Rushis (Sages), the conch sounded on the earth has its impact on other regions of the universe and the subtlemost waves there attain momentum and start becoming active. So also, as the nucleus of the void of the sound is the conch, these waves are also attracted to the conch and reach the venue where the conch is sounded.

B. The sound of a conch increases the
nirgun Principle of God in the environment and purifies it

C. The sound of a conch reduces the energy of
powerful negative energies fighting at the nirgun level

The nirgun level sound of a conch is at the subtlemost level and is endowed with nirgun Chaitanya of God. Hence, the sound immediately reduces the energy of powerful negative energies of the regions Bhu, Bhuva, Swarga and Mahalok (Higher subtle region).

D. Purification of the bodies due to the sounding of a conch

On hearing the sound of a conch, the sukshma-deha (Subtle body), karan-deha (Causal body or intellect) and mahakaran-deha (Supracausal body or ego) of an individual are purified. The black energy accumulated in them is eliminated faster due to the sound-oriented impact.

E. Sound of a conch is pervasive and a complete sound

On studying the character of the sound of a conch, its pervasive nature and completeness are understood. It is because of the striking character of the sound of the conch, that the scriptures advise sounding a conch at the commencement of puja and Arti, at the commencement and end of a war, and at the time of coronation or other religious rituals.