When preparing for the puja, the worshipper should first purify the venue of the puja. In the present times, attack of Raja-Tama has increased greatly, which help negative energies to envelop the temple at home, implements of the puja and the venue with black energy. As a result, the worshipper does not get expected benefits from the puja. Sweeping of the floor of the room housing the temple at home followed by sprinkling of gomutra (Cow’s urine) and burning of frankincense is done for purifying the room.

When sweeping the floor and smearing it with cowdung, subtle-lines are created on the ground which generate a specific type of vibrations. These lines are irregular in nature and so are the vibrations. That makes them harmful for the body, eyes and mind. To overcome these unfavourable vibrations, through the medium of rangoli conical designs and auspicious symbols are drawn on the floor. Rangoli regularises the vibrations generated by sweeping and smearing, and thereafter, eliminates the inauspicious effects and bestows auspicious effects. 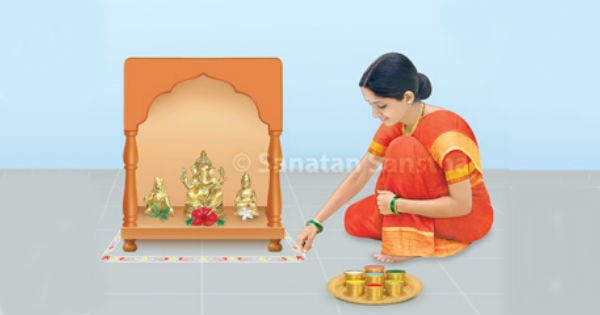 1. If possible, why should rangoli be drawn by women ?

A. Only women should draw rangoli for a puja, because women can easily imbibe the subtle-Principle of a Deity and are sensitive in generation of designs that portray the subtle-vibrations associated with the respective Divine Principle. As a result, the Divine Principle active in the universe gets easily attracted to the rangoli and gets activated. That is why, for an individual in the preliminary stage, getting the rangoli drawn by a woman is beneficial. However, when a man with unexpressed bhav (Spiritual emotion) or spiritual level above 50% draws rangoli, the process that takes place is identical.

B. Greater activation of the Divine Principle, benefiting the entire atmosphere and the individuals performing the puja.

C. Since rangolis are associated with waves of art to some extent, the Anahat- chakra of the women drawing it is activated. As a result, their sensitivity in imbibing Chaitanya (Divine consciousness) increases and it enables them, to an extent, to easily imbibe the subtle and even the higher level Principle emanating from the puja.

D. A Man who accompany their spouse in the puja also participate in its preparations. Hence, their ability to absorb the Divine Principle increases to an extent and they are able to easily imbibe the Principle emanating from the puja.

2. Why should rangoli associated with the Deity Principle be drawn ?

When drawing the rangoli for a puja, the pattern should, as far as possible, be such that it attracts the Principle of the chief Deity of worship. When worshipping a specific Deity, rangoli associated with that Deity should be drawn. Rangoli is conducive in imbibing the nirgun (Non-materialised) Principle of the Deity and emitting it as per the capability of the environment and the individual. Hence, a rangoli associated with the Deity Principle proves to be favourable for the mission, and the Principle of the Deity begins to move towards the environment and the individual in greater proportion.

3. Why should a rangoli pattern
not depict the Name or form of a Deity ?

When a rangoli pattern is drawn depicting the Name or form of a Deity, it acquires the restrictions of the sagun (Materialised) form of Shakti (Divine Energy). This reduces the functional ability of the rangoli. On the other hand, since the rangoli drawn with swastiks or dots has the support of the nirgun Shakti, it enhances its capability and it becomes capable of functioning to a greater extent with the help of manifest Shakti. Hence, the rangoli pattern should be created on dots.

4. Why should haldi-kumkum be
offered to a rangoli pattern upon its completion ?

Due to white particles of the rangoli, it is more capable of attracting the Divine waves when compared with other colours. However, the white colour is primarily associated with the non-functioning nature of Sustenance. Hence, the pure white rangoli does not attain momentum, and remains functional in a restricted area. Offering haldi (Turmeric) to the rangoli activates Ichha-shakti (Energy of will), which is Raja- predominant and in the form of Sri Gaṇesh Principle. Similarly, when kumkum is offered, the manifest Shakti of Sri Durgadevi is activated. As a result, the Divine Principle getting attracted to the rangoli acquires momentum and causes disintegration of polluted vibrations and particles in the environment. In addition, the negative energy attacks from Patal are arrested. Hence, haldi-kumkum should be offered to a rangoli pattern upon its completion.

5. Why should colours complementary
to the Deity’s Principle be used in a rangoli?

The white colour in rangoli powder is associated with the nirgun and hence, attracts waves associated with the nirgun Principle. To activate the Principle of a particular Deity for achieving the desired objective, it is beneficial to use colours that match the Principle of that particular Deity; for example, red colour should be used in rangoli pattern for Sri Gaṇesh and saffron colour for that of Deity Hanuman.

Tama
One of the three components in the Universe denoting inertia and ignorance
Rangoli
Holy designs made from white crushed powder
Haldi-Kumkum
Married lady applying haldi (turmeric powder) and kumkum (vermilion) to other married ladies.