Why is milk or gandha
(Sandalwood paste) used when making a vastra fromcotton? 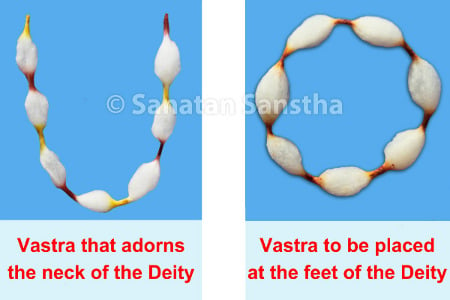 The cotton vastra represents the Sushumnanadi of the Kundalini and the seven cotton beads in the vastra are associated with the seven Kundalini Chakras in the body of the individual. The cotton thread joining these beads is the link to the sagun (Materialised) Chaitanya (Divine consciousness) providing Sattvik waves to the entire body.When the nirgun (Non-Materialised) Chaitanya in the Absolute zero manifests as per the bhav (Spiritual emotion) of the individual towards God, its colour is white and shining. In contrast the sagun Chaitanya is like transparent water;it is however dormant in this state. The cotton beads and the thread joining them are the carriers of the sagun Chaitanya in the body. Milk is used to make the constrictions in this thread because the flow of sagun Chaitanya is like the flow of milk. When this Chaitanya is provided to these beads, these beads, like centres of the kundalini in the body are activated and the individual comes into a state of dvait (duality)and on the strength of advait (non-duality) carry out the functions related to the physical body in the Universe.

Use of gandha is preferable to milk when making the vastra. Due to the coating of gandha the frequencies of the Deities are activated faster and get attracted to the cotton vastra. By adorning the Deity’s neck with this sattvik vastra, the Deity assumes His ‘sagun’ form faster and begins functioning for the individual in a shorter time.

What is the Science in offering the janeu to Deities ?

Offering the janeu to Deities means binding the expanse of the brilliance of Deities in the rounds of the sacred thread and evoking them to function in dvait. As the janeu is made of thread and is charged with energy of a mantra, the frequencies of sound emitted by it activate the nirgun Principle of God from the Universe. This then functions for the individual as per its bhav towards God. The thread of janeu represents the silver link between God (advait) and the individual (dvait). Offering the janeu is an important process of interaction of dvait-advait. Wearing this sacred thread after the ritualistic worship endows one with the sattvik Chaitanya of the Deity. (Through the medium of Mrs. Anjali Gadgil, 22nd April 2004, 2.45 p.m.)

Reference : Sanatan’s Holy Text ‘What is the importance of the substances used in ritualistic worship ?’