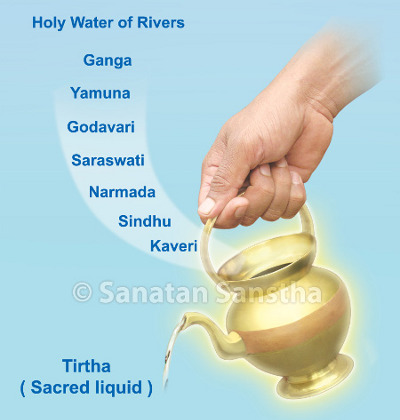 Water of the seven Holy rivers

The seven rivers referred to, are the Holy rivers Ganga, Yamuna, Godavari, Saraswati, Narmada, Sindhu and Kaveri. Water collected from these seven rivers is put in the ritualistic pot, which is used during ritualistic worship.

‘Water from these seven Holy rivers has the ability to attract and transmit the waves of Saptadevtas (Seven superior Deities). India is known as the most sattvik place on earth because it is the only country through which, all these seven rivers flow. Many yogis (Those who have reached the state of union with God (Brahman), by following Yoga) have undertaken penance on the banks of these rivers so as to acquire the Principles of the Saptadevtas in the Universe. This water from the ritualistic pot is used for performing Abhishek. The subtle sound waves from the ritualistic pot absorb the waves of the Saptadevtas in the water and effectively transmit them into the environment. Since these subtle sound waves have a higher speed and expanse, the effectiveness of the waves of the Saptadevtas transmitted into the environment through the water of the seven rivers remains in the environment for a longer period. Since these waves are transmitted with the help of the particles of the Apatattva (Absolute Water Principle) in the water and the particles of the Akashtattva (Absolute Ether Principle) from the sound waves in the ritualistic pot, this water can be consumed as Tirtha. By consuming the Tirtha with bhav (Spiritual emotion) and bhakti (Devotion), the Divine waves in this Tirtha activate the Panchapran (Five vital energies), which are lying dormant, in the form of gases around the navel, of the devotee. With the help of these subtle gases these Divine waves spread all over the body of the devotee. As a result, purification of the prana (Vital energy)and pranamay-kosha (Vital energy sheath) of the individual occurs. Hence, consuming Tirtha gives the individual Sattvik satisfaction and his mind becomes Blissful and enthusiastic.

Note 1 : The rivers have been arranged in the order of the level of the Principle of the associated waves.

In the present times, it is difficult to procure water from all the seven Holy rivers. When Holy river water is unavailable one may use ordinary water. When filling the ritualistic pot with ordinary water the mantra ‘Gange cha Yamunechaiva…’ is recited to invoke the seven rivers.

Reference : Sanatan’s Holy Text ‘What is the Importance of the Substances used in Ritualistic Worship ?’