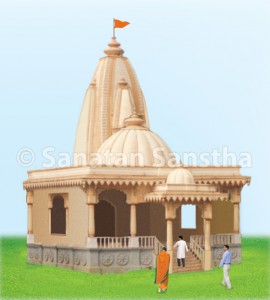 Most of us go to the temple from time to time. Some of us have a day fixed during the week when we go to the temple and worship God and offer prayers. Some of us may even go to the temple on a daily basis in order to sing Arati (A ritual of waving a lit lamp in front of Deity or Saints, accompanied by singing of hymns) and perform puja (Ritualistic worship). Hindu dharma gives us knowledge based on shastra (science) which explains with clarity what is the importance of having darshan in a Devalay. In the following article we will see how we can benefit from taking darshan in a Devalay and the importance of a Devalay.

1. All the ten directions get charged with
Chaitanya (Divine consciousness) because of a Devalay

Since a Devalay is a seat of attraction, emission and distribution of the actual Shakti (Divine Energy), Shakti is constantly attracted towards the Devalay and is also emitted in all directions and because of its movement in the sagun (Materialised) areas, it brings about the purification of the environment and the individual.- A Scholar (Through the medium of Mr. Nishad Deshmukh, 4th January 2007, 6.53 p.m.)

Through the ritualistic laying of the shila (foundation stone) during the ceremony for a Devalay, the atmosphere of the lower direction gets charged with Chaitanya waves.

With consecration of the Idol of the Deity inside the Devalay, all the eight directions get charged with Chaitanya.

Emission of sattvik fountain like waves from the kalash (Dome) of the Devalay purifies the atmosphere in the upper direction of the surrounding area. These waves also help protect the village from negative energies that enter from all the ten directions. – A Scholar (Through the medium of Mrs. Anjali Gadgil, 14th January 2005)

2. During eclipse, Raja-Tama-predominant waves even at a distance of 5 kilometres from the surface of the earth are destroyed due to Hindu Devalays

During the period of an eclipse, Raja-Tama-predominant waves laden with black energy descend on the earth. These Raja-Tama-predominant waves at a distance of 5 kilometres from the surface of the earth are destroyed due to the Deity Principle, Chaitanya, sattvikta and marak-shakti (Destroyer Energy) being emitted from the Idol of the Deity in Hindu Devalays. Thus reducing their ill effects on earth. – God (Through the medium of Ms. Madhura Bhosale, 4th October 2005, 2.50 to 3.08 p.m.)

3. Importance as per Bhaktiyoga (Path of Devotion)

A. By going to a Devalay to have darshan, we can benefit from the sattvikta present there. The sattvik environment helps us in increasing our devotion and bhav (Spiritual emotion) unto the Deity.

B. During rituals such as puja, Abhishek (Consecration by ritualistic bathing with water, milk etc.) and Arati, pavitraks (Subtlemost particles containing Chaitanya) of the Deity get attracted towards the Deity’s Idol in a larger proportion. The devotees present in the Devalay during this time are naturally benefit from these pavitraks.

C. Devalays referred as Swayambhu (Self-materialised Idols) or Jagrut (Awakened; for example, the Devalays at the site of the twelve Jyotirlingas) and those built by Saints have higher percentage of energy and Chaitanya and therefore visiting such Devalays proves more beneficial for a devotee.

1. Getting a spiritual experience upon visiting a Devalay built by a Saint because of  the Shakti and Chaitanya present there

, followed by reduction in pressure experienced on the head, followed by automatic chanting: We reached Gondavale from Miraj on 13th October 2004. On visiting Shriram’s Devalay at Gondavale, I experienced distress at first because of the Divine Energy and Chaitanya present there in the Devalay. As soon as I entered Shriram’s Devalay built by H.H. Gondavlekar Maharaj, I started yawning. My eyes turned red. After a while, the pressure I was experiencing on my head reduced and my chanting began automatically. We were in the Devalay only for five minutes. Yet in that short time, I had the spiritual experience of the fact that Devalays built by Saints have larger proportion of Shakti and Chaitanya. – Ms. Rupali Kulkarni, Sanatan Ashram, Ramnathi, Goa.

(Negative energy was ejected from the seeker’s body in the form of yawns. – Compiler)

4. Importance as per Dnyanyoga (Path of Knowledge)

‘द्रष्टा दृश्यवशाद्बद्धः दृश्याभावे विमुच्यते ।’ meaning, the ‘Drashta’ (individual – the one who sees) is bound by what he sees and when the visible scene ceases to exist, the drashta is freed; for instance, when a favourite dish is in sight, the desire to eat it exists; when not in sight, the desire ceases to exist. Different scenes keep appearing before the eyes one after the other all the time. Then when will they cease to exist ? There possibly lies but one way for the drashta to be liberated, and that is to place before him scenes which will only help him in the liberation process, meaning, his attitude will progress from Tama to Raja, and from Raja to Sattva. One such scene is a Devalay. In the Devalay, discourses and bhajans (Devotional songs) describing the glory of the birth-mission and leela (Divine play) of Incarnations and that of His devotees take place. Hearing all this results in contemplation, leading to intense yearning that culminates in self-realisation. – H.H. Kane Maharaj, Narayangaon, Pune District, Maharashtra.

5. Importance of having darshan in a Devalay

A. Having darshan in a Devalay amounts to making
an effort to move from the sagun to the nirgun ̣̣ (Non-materialised)

1. Having darshan in a Devalay amounts to chronologically taking the help of gross activities, followed by visiting the subtle-region of the Deities, making use of the nirgun-sagun medium, followed by worship of the Deities, undertaking actual spiritual practice and thus progressing spiritually.

2. Having darshan in a Devalay denotes a stepwise attempt to progress towards the nirgun by experiencing God through the sagun worship of actual Shakti, obtaining the blessings of God by learning through experiences and by worshipping Shakti coming in the form of blessings from God. – A Scholar (Through the medium of Mr. Nishad Deshmukh, 4th January 2007, 6.50 p.m.).

B. The process of having darshan in a Devalay
accomplishes vyashti and samashti sadhana

Reference : Sanatan’s Holy text ‘How to have Darshan in a Devalay ?’